One of These Advanced Robots May Take Over the World 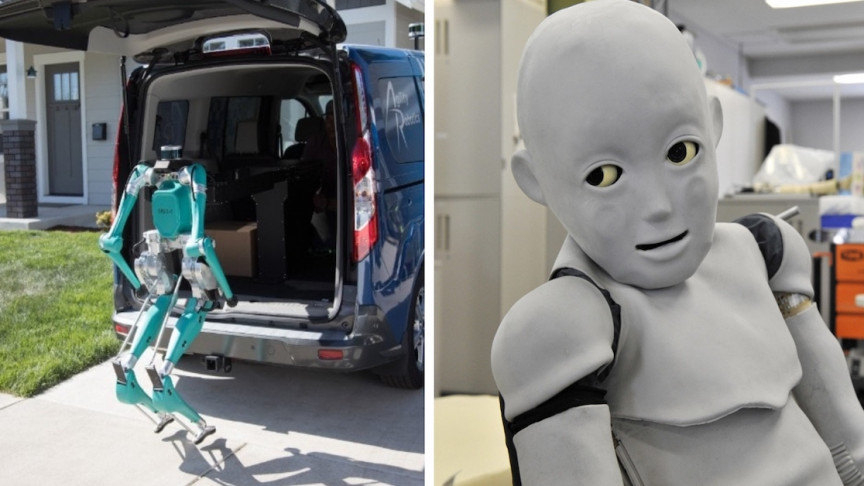 Remember, in 2017, when Elon Musk said that in a few years, robots would move so fast that you will need a strobe light to see them? Good. So do we. The modern age of robotics embodies some of the highest levels of engineering and human ingenuity. However, when people talk about these machines, they can be very opinionated. There sometimes seems to be no middle ground when people discuss robotics. Some people either think robots are amazing, or are worried they will take your job, or fear they will eventually over the world.

Though the last two points are valid concerns, robots have also done a lot of good in a wide range of industries and at home. In fact, intelligent machines might have a lot to offer their human creators, they are already improving people’s lives. Robots are becoming a big part of the medical field, agriculture, homecare, space exploration art, and have even helped us during this pandemic. For example, a hospital in Wuhan, China, used humanoid robots donated by the Silicon Valley Company CloudMinds Technology to disinfect, measure temperatures, deliver food and medicine, and entertain medical staff and patients.

Robots will continue to become more advanced. Over the past few years, we have seen established companies and start-up-made debut machines that can move like us, and even talk like us. Sophisticated manufacturing processes and increasingly powerful artificial intelligence has opened the gates to a new age in the field, moving far beyond their ancestors, which were mostly immobile and focused on one task. So, of course, this makes things a bit scarier. Today we are going to look at some of the most advanced robots on the market and how these machines are changing the world of robotics.

The Surena IV looks like something out of an episode in Black Mirror.

Researchers at the University of Tehran have made huge progress in robotics over the years, with their innovation manifesting itself in the humanoid robot called Surena. First, introduced a decade ago, Surena was originally not anything too special compared to the robots that we have now. However, the Surena II and 2015s Surena III, demonstrated improvements in walking and a great expansion in capabilities. Iranian roboticists debuted Surena IV earlier this year, and it is impressive. An improvement over its previous iterations, the robot has demonstrated the ability to mimic a person’s pose, to grasp a water bottle, and even write its name on a whiteboard. The adult-sized, nimble Surena IV is capable of face and object detection, and speech recognition and generation. It can even walk at a speed of 0.43 miles per hour (0.7 kilometers per hour).

This robot is a real-life transformer. Created by Houston Mechatronics, the aquanaut is a robot in a class of its own. It has the unique ability to transform while underwater, moving from an autonomous submersible vehicle (AUV), into a humanoid maintenance robot (ROV). In its AUV mode, it can cover up to 124 miles (200km) on one mission, completing tasks like seabed mapping and wide-area inspection. While in ROV mode, two mechanical arms come out of its body, giving it the ability to conduct repairs on oil rigs and pipelines in hazardous environments not easily accessible by humans.

A pack of wild Sony Aibo dogs could chase you around the city.

Maybe not. These robot dogs are unbelievably adorable. Sony’s Aibo is a robotic dog that has been wildly popular over the years. The robotic dog is actually a hybrid between a pet and a toy. Since its first appearance in 2018, the robot dog has gotten much smarter, thanks to artificial intelligence. Similar to your real-life furry best friend, Aibo can recognize its owner. It even adapts to an owner’s behavior over time. The eventual aim is to have the robot dog behave indistinguishably from a real dog. Think Pinocchio, but as a robot dog. And this may come to fruition sooner than you think. The AI algorithms that give the dogs their intelligence are kept in the cloud. This allows active Aibos to learn collectively, meaning they can all learn from each other.

The CB2 is a creepy expressive child-sized robot that has become a meme.

We had to add this robot for two obvious reasons. First, this expressive robot sits right on the line of creepy and comical, so much so that it has caught the internet’s attention, becoming a meme. CB2 is a humanoid robot that mimics the physical and mental capabilities of a 2-year-old child. The robot has tactile sensors under its skin and a camera behind its eyes. The robot uses facial recognition technology to understand the emotions and physical reactions of its researcher parents. It even responds to being stroked and cuddled.

Robonauts, like the Vyommitra, could build their own colonies in space.

There are multiple countries around the world working on developing robots for space exploration. It makes sense. Robots can handle the harsh environments of space and can be used for a wide range of missions. Future robots could be used to study potentially habitable planets and even build and establish outposts before their human counterparts arrive. The Indian robot Vyomitra is a female robot scheduled to conduct microgravity experiments to help prepare for future crewed missions. Similar robots, like NASA’s Robonaut 2 and Valkyrie could eventually be used on colonies on the Moon or on Mars.

Actually, getting chased down by a pack of Boston Dynamics’ Spot robots is much scarier.

Boston Dynamics had to make this list. Their somewhat dog-like SPOT robot recently entered the market. But the nimble, canine-like intelligent robot has been in the public eye for a while. SPOT is not a pet or a toy like the Sony Aibo. Starting at about $70,000, the robot can “traverse through rough terrain with unprecedented ease” but is small enough to use indoors, making it extremely versatile. It features a 360-degree vision and obstacle avoidance. The robot can either be taught actions or use pre-planned routes to perform autonomous missions. It can also carry various payloads. You might one day see SPOT on a construction site, inspecting oil and gas facilities, checking mining routes, or being used to deliver supplies to medical professionals. See SPOT run.

Asimo can walk up the stairs almost as well as you.

Honda’s Asimo was considered to be one of the world’s most advanced humanoid robots, although it has recently been retired. Thanks to its complex AI system, the robot was able to constantly learn from its environment. The two-legged robot could keep itself upright, stable, and in motion in many different environments. The robot was able to learn how to walk in its settings almost independently.

The T-HR3 is a real-world avatar controlled by you.

No, not Avatar, the movie, but the idea is very similar. In 2017, Toyota introduced T-HR3. Using a specialized station, arm controllers/sensors, and virtual reality gear, this robot can come to life matching each of your movements. Though not perfect, it is an impressive feat. If you move your arms to the left, the robot will move its arms to the left. If you move the arms to the right, the robot will follow. So, it is basically a real-world avatar. The T-HR3 has been updated for use at the 2021 Olympics, with improved controls and more natural movements. Robots like these have a host of applications. Toyota envisions using these robots as a mobility device. In the future, specialist doctors could put on specialized gear and perform surgeries from all the way around the world. These robots could also be used as caregivers for the sick and elderly, with operators controlling the robots remotely.

Sophia may be the face of robots.

Meet Sophia. You may have come across Sophia, read her tweets, and even seen her speeches. She even sat down and talked with Will Smith. She is a celebrity in the robot world. Created by former Disney Imagineer David Hanson, the robot is modeled in-part to look like Audrey Hepburn, and the creator’s wife. The intelligent machine was built with the aim of mimicking human behaviors and to inspire feelings of love and compassion in humans. The robot can even express emotions using her human-like face. Since her unveiling in 2016, Sophia has appeared on the cover of Elle magazine, made dozens of global appearances, and even became an official Saudia Arabian citizen.

Sophia was named the United Nations Development Programme’s first-ever Innovation champion and is the first non-human to be given a UN title. Though Sophia is one of the most expressive human-like robots ever created, it is important to note that she is not self-aware. Like any other robot on our list, she is driven by narrow artificial intelligence, meaning she still needs someone to program her actions, movements, responses, etc. Nevertheless, Sophia is an impressive engineering creation and could be an example of how human-like robots could be once we move past the narrow AI threshold.

Digit could show up one day at your door……unannounced.

It is not as creepy as it sounds, depending on who you ask. Just this past year, Ford became the first company to incorporate the Digit robot into their factories. Created by Agility Robotics, Digit is a nimble and “headless” robot, about the size of a small human. Packed with sensors, the robot can navigate stairs, traverse various obstacles, and move across multiple terrains.

Most importantly, it can carry and stack boxes weighing up to 40 pounds (18 kg). This is what Ford is excited about. Digit could also change the way self-driving cars make deliveries. Imagine you order the new PlayStation online. Rather than have a mailman drop off the gaming console, an autonomous truck would arrive at your house. No humans would be in this delivery truck. Digit would step out of the truck, grab your package from the back of the truck, walk over to your doorstep, and carefully place the box on your front door. This could happen in a few years. Yay…