Hearing aids are medical devices that can cost over a thousand dollars and usually require professional fitting and adjustment. Wire-free earphones can be as inexpensive as $30 and are ready to be used in minutes. The Olive Smart Ear falls between those two categories. This $299 device is an versatile earpiece that can amplify sound up to 50dB with a quick, app-based calibration process that lets you customize its performance to your hearing. It also lets you take phone calls and listen to music and podcasts. It isn’t an actual hearing aid, though, and shouldn’t be used for severe hearing loss.

The Olive Smart Ear is a single white plastic earpiece with a circular body. Two microphone holes sit on the back panel, with a touch-sensitive surface between them for controlling the earpiece by tapping and holding it (tap once to decrease volume, tap twice to increase volume, and hold for power and pairing mode).

The earpiece doesn’t have any hooks or fins, but it comes with two rubber rings that add a bit of thickness and texture to the plastic body for a more secure fit. The Smart Ear also includes three silicone eartips and two foam eartips of different sizes. With the ring and the right eartip, the earpiece should sit comfortably and securely in your ear.

Unlike many true wireless earbuds, the Smart Ear doesn’t have an IP rating and is not water resistant in any way, so don’t wear it in the shower or swimming.

The Smart Ear comes with a nearly cube-shaped charging case. The case is a single block of plastic with no lid or hinge, with a hole running through the middle that expands into an indentation for the earpiece. The earpiece sits securely in its recess when charging, and it never fell out of the case when I placed it in my pocket and walked around.

A micro USB port and indicator light sits on one side of the case, and the Smart Ear itself lights up when it’s charging. According to Olive Union, the Smart Ear can last up to seven hours on a charge, and the case provides two additional charges.

The Smart Ear functions as a monaural earphone when connected to a smartphone (Android or iOS), which also provides controls for the sound enhancement features through the Olive app. The app lets you switch between three sound modes: Default (general sound enhancement), Conversation (enhancing speech), and TV Mode (for watching TV). You can also toggle Feedback Cancellation, if you experience any feedback with the earpiece’s microphones.

The app walks you through a quick calibration process where you put the Smart Ear in each ear and tap your phone when you start to hear different tones of varying frequencies. This calibration step, along with your birth year and month, gender (only male and female are selectable), and whether you already have experience with a hearing aid (all fields you enter in the app), determines the Smart Ear’s EQ curve for what frequency bands are enhanced and how much. You can also adjust this EQ manually in the app. 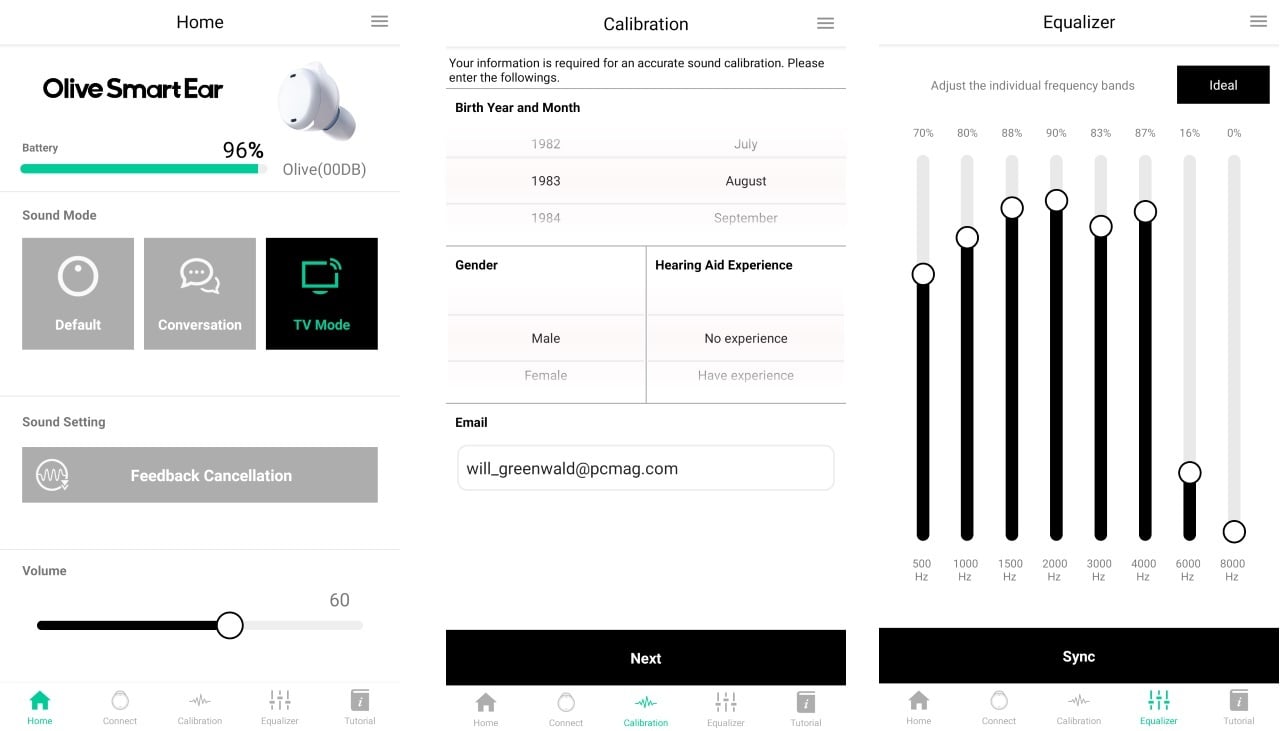 You can use two Smart Ears at once to provide hearing enhancement once you’ve calibrated them through the app, but only one can be connected to your phone at a time. This means both earphones will boost sounds, but any music or calls will only come through one.

I’m not experienced with hearing aids, and my hearing is generally OK, though I often mishear or have trouble hearing people speak in loud environments. I spent some time with the Smart Ear both in my apartment and walking around my neighborhood, experimenting with the hearing enhancement features.

To start, the three sound modes are quite different, and produce different levels of background hum. Default and TV Mode both generate a baseline level of white noise-like fuzz as they boost surrounding sound. Conversation mode has almost no fuzz, as it seems to boost a much more narrow range of frequencies to specifically pick up voices.

It took a bit of time getting used to the hearing enhancement feature. The earpiece appears to pick up certain frequency bands and identifies and enhances certain sounds in those bands, depending on the mode and the calibration. Walking around outside with the Smart Ear in Default mode in my right ear, I became accustomed to the low hum of the earpiece. I expected enhanced sounds to come through fuzzily, but when the earpiece picked up sounds like people talking or shoes scuffing on the sidewalk, it came through more clearly than I anticipated.

I also watched some TV from my couch with the Smart Ear set to TV Mode. It picked up and enhanced the sound from the TV and it sounded natural. Again, this came on top of the baseline white noise the mode produces, so in a way it sounds extra clear against the fuzziness of the low-level hum. I switched to Conversation mode, which cut out the white noise, but didn’t do much to help the sound from my TV and seems to be the most limited of the three in terms of boosting sound.

This isn’t superhuman hearing by any means. I found the effect to complement my particular hearing issues, but it doesn’t provide a significant boost in sensitivity outside of some limited cases. Occasionally I heard a footstep or a word from across the street clearly if the source was angled just right relative to my position, but most of the time it simply adds a bit of a boost to sounds close by. Of course, the effect will probably differ when calibrated to a user with poorer hearing.

While you won’t get stereo sound from a single Smart Ear, it does produce crisp and balanced audio for music. However, when any audio is played through the earpiece, the sound enhancement functions immediately stop and the Smart Ear only plays whatever sound is streamed through it. When you stop playing anything through your phone, the microphones kick in to augment your hearing again within a second or two.

The guitar notes and vocals in Fleetwood Mac’s “The Chain” sound clean and clear, and while the kick drum hits don’t reach remotely into lower bass frequencies, they sound punchy enough to keep up with the track. The Crystal Method’s “Born Too Slow” sounds similarly strong, with guitar riffs and vocals getting plenty of high-mid presence and the backbeat pumping along despite lacking much low-end power. The earpiece also works very well for podcasts; the Castle Super Beast Cast came through with clear, strong sound as I walked around.

Calls also come through quite well on the Smart Ear. The microphones on the earpiece picked up my voice in test calls without issue, and I could be clearly understood on the other end. Keep in mind the microphones on the Smart Ear aren’t designed to block outside noise, so you won’t get voice quality as good as you will through a Bluetooth headset with a dedicated, noise-cancelling mic.

The Olive Smart Ear is a difficult device to pin down. It can improve your hearing thanks to some sophisticated audio processing and sensitive microphones, but it very specifically is not a hearing aid in the medical sense of the term. Still, it’s used in much the same way, and doubles as a monaural earphone for listening to music, podcasts, and taking calls, which conventional hearing aids can’t do. Its $300 price is quite hefty for any earphone, but it’s far less than a hearing aid. If your hearing is diminishing and can use a bit of a boost, but you aren’t quite ready to take the step of getting a hearing aid, the Olive Ear is a viable, non-medical alternative.