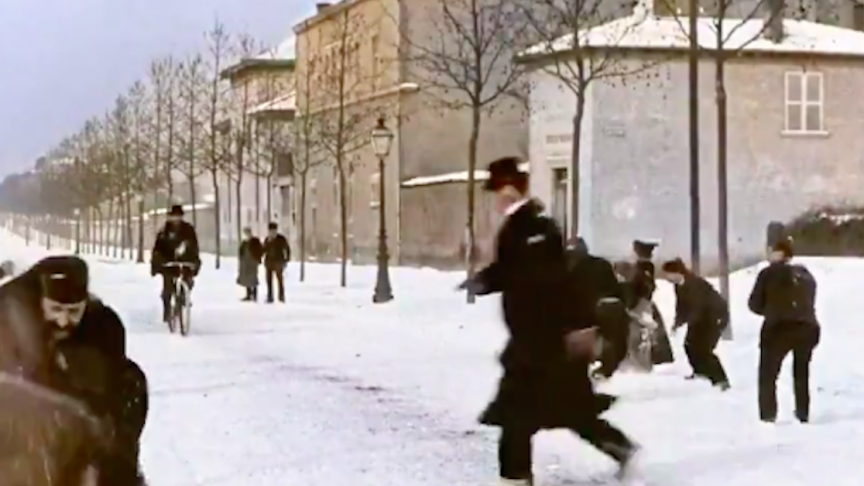 Photography and technology enthusiasts are bringing back the past by colorizing images or footage. The latest example is a lighthearted short silent film shot by Louis and Auguste Lumière in 1896, entitled ‘Bataille de boules de neige,’ or Snowball Fight.

The footage was filmed in Lyon, France, and it was brought back to life using AI-powered software and colorization techniques.

The Lumière brothers were well-known for their filmmaking pioneering, as they captured some of the world’s first moving movies.

SEE ALSO: 7 FUTURISTIC VEHICLE CONCEPTS OF THE PAST BY TODAY’S DESIGNERS

It’s an odd moment when you watch a vintage movie in color. You see the characters moving, you notice the color of their clothing and their surroundings, which should be totally normal, yet something’s off.

That’s the feeling you get when you watch the newly-re-released 1896 Snowball Fight footage.

The colorized version of the movie was first posted online by Twitter user Joaquim Campa. Campa used the AI-powered software, DeOldify, to upscale the footage to 1080p, he also interpolated extra frames to create a smoother end result, and colorized the vintage film, as per Vintag.es.

In the short silent footage, you see a number of adults clad in typical 1896 clothing enjoying a snowball fight. A seemingly unaware cyclist tries to move past the group, but they all turn their snowball-throwing skills towards him, and you see him fall to the ground. He then swiftly picks himself up and cycles away as fast as he can.

It’s a striking visual into a window from the past. However, some historians are urging people to stop colorizing vintage footage in this manner, as per a report by Wired. Essentially, as this newly-colorized footage never existed, it’s a tragedy to change them into something they were never meant to be.

That said, others are opposing these comments by stating that the colorized versions are igniting a newfound passion for history. Most of us would most likely never have stumbled upon such a historic silent movie as Snowball Fight, or found out about the Lumière brothers had the footage not been colorized and shared publicly.

Here are the colorized, and the original versions, respectively: