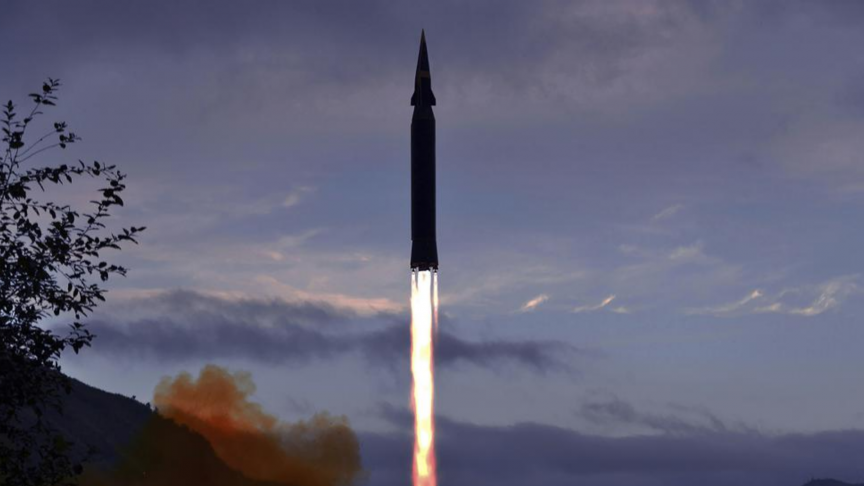 Amidst the Korean nations’ attempts to flex their might with demonstrations of various weapon systems, the North has now claimed to have completed the first flight of its hypersonic missile, AP News reported.  Unlike previous occasions though, the Korean Central News Agency (KCNA) has just released a single image of the test, raising more questions than answering them.

Peace negotiations have stalled between the two warring nations, since February of 2019. Playing peace broker, the U.S. has placed sanctions on the Northern nation in an attempt to secure denuclearization while Pyongyang asserts that developing nuclear weapons is its right. Earlier this month, South Korea also demonstrated a series of new missile technologies added to the escalating tensions.

North Korea is hoping that demonstrating a nuclear-capable missile will bring South Korea and the U.S. back to the discussion table, AP News reported. Going by the KCNA claims, the flight met “key technical requirements” that include launch stability and maneuverability of the “hypersonic gliding warhead.” While difficult to verify, the U.S. has its own share of problems with this technology.

Analyzing the image shared by KCNA, Ankit Panda, an expert on North Korea’s weapon systems, suggested that the missile could be harboring a Manueverable Re-entry Vehicle (MaRV) payload.

Hard to tell at this resolution, but this looks like a MaRV payload (which can be hypersonic and “glide” ). This is one end of the “hypersonic glider” technology spectrum. pic.twitter.com/30o6zZopex

A MaRV payload may have less maneuverability compared to other technologies in this arena but it is still hypersonic and difficult to detect and intercept. North Korea has called it ‘strategic’, implying that is nuclear-capable. Further details of the test are needed to determine its real capabilities.

KCNA also said that the test confirmed the stability of the missile’s fuel capsule indicating the usage of some technology to allows the storage of the missile for an extended period following its fueling, AP News reported. This is expected to reduce the response time in an adverse event, another strategy that North Korea plans to utilize, apart from its highly mobile launch sites on trains.

South Korean officials have regarded the test to be preliminary and nowhere near actual deployment, as per AP News reports. While weapons experts do not think that North Korea has the necessary resources to take all the weapon systems demonstration to their final development, it is interesting how the country keeps rehashing weapon concepts time and again.