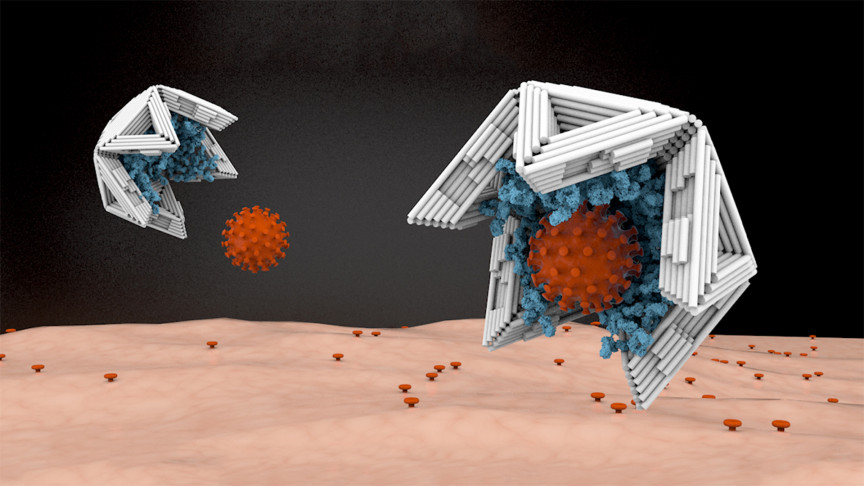 Using a “DNA origami” method, the researchers built nano-capsules tailored from genetic material that can neutralize viruses by capturing them.

The team behind the new technology has been experimenting with DNA programming for years. For their latest work, they made “hollow nano objects,” which essentially trap viruses, preventing them from infecting other cells.

The tiny virus traps were built in a shape called an icosahedron, made up of 20 triangular surfaces. The inside of the traps are lined with molecules that bind to viruses.

“Even a simple half-shell of the right size shows a measurable reduction in virus activity,” said Hendrik Dietz, coauthor of the study. “If we put five binding sites for the virus on the inside, for example suitable antibodies, we can already block the virus by 80 percent, if we incorporate more, we achieve complete blocking.”

Virus trap tech could also be used for targeted treatments

The team tested their traps in lab cell cultures with mouse serum, human cells, and viruses. The tiny structures remained stable in the serum for 24 hours and caught two types of viruses, hepatitis B and adeno-associated viruses (AAVs), preventing them from infecting the human cells in the serum.

Dietz also explained that the same technology could potentially be used as a transport vehicle for drugs.

Similarly, in March this year, researchers from Bionaut Labs announced that they are developing tiny injectable robots that travel through the bloodstream using a drill motion. Those tiny machines are being developed to deliver targeted treatments directly to tumors, allowing strong medications to be less detrimental to other parts of the body.

The TUM researchers aim to test their virus traps inside the bodies of mice next. They believe their DNA origami structures will eventually be injectable into humans, allowing for specialized treatments that trap virus cells before they can infect human cells.