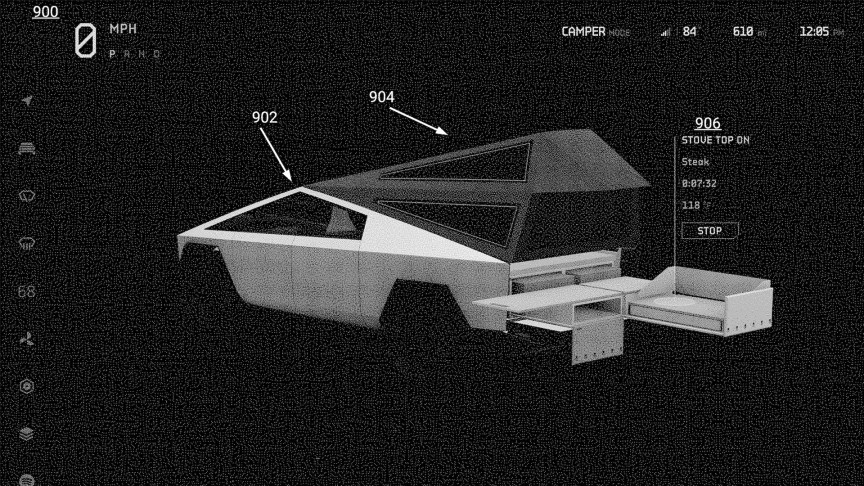 It’s been a year and a half since Tesla unveiled its mammoth Cybertruck to the world, yet we still get excited when we hear about new patents emerging around its tech.

And that’s precisely what’s going on since Twitter user “AMuchVaccinatedFace” posted a note on May 27 saying that Tesla had filed a patent for the Cybertruck’s user interface (UI).

The patent in question was published on the USPTO website, and shows a number of grainy, black and white renderings and images of the Cybertruck, offering additional hints about how the truck will perform.

Source for this screenshot is from a patent filed by @Tesla today for Cybertruck’s user interface. $TSLAhttps://t.co/CIiQlAsnjb https://t.co/cesNdFMBo4

Other interesting speculations were drawn up in the patent, such as eye-tracking technology that can help move the Cybertruck’s mirrors when needed, as well as a very fancy air conditioning system that adjusts itself automatically based on what it gauges from its passengers’ body temperatures.

Drawings showing off the Cybertruck’s potential camping comforts were also put on display with images of a pull-out stove top and tent, as well as its ability to tow a 20,000 pound (9,071.8 kg) trailer and a 20-inch suspension option. These features would certainly compliment the truck’s camping capabilities, which Tesla assures us is possible.

Cybertrucks may be gracing the U.S.’s roads as early as the end of this year, Teslarati reported, and given the recently-published patent’s information, as well as some leaked images of the truck in late April, many people will be waiting with bated breath until that date.