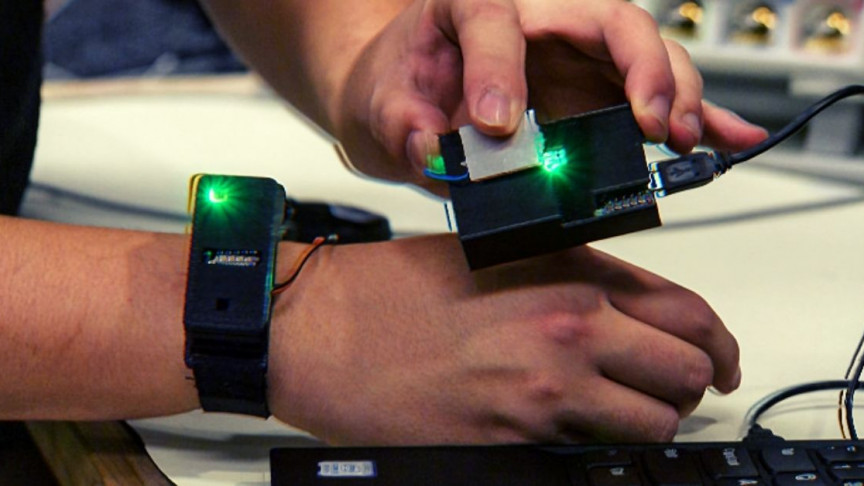 Imagine a future where, instead of scanning a smartphone or inserting a card, we can complete any transaction with a simple touch of a finger.

Engineers at Purdue University developed a new prototype device enabling the human body to act as the link between smartphone-assisted payments and a card reader, allowing consumers to pay their due with a human touch, according to a recent study published in the journal Association for Computing Machinery.

The Purdue University prototype is the first technology allowing users to transfer digital information through the direct touch of a fingertip.

The prototype takes the form of a wearable wristband, and it sends information like photos or a password via touch, offering programmable future payments and scheduling, said the researchers in their study.

“We’re used to unlocking devices using our fingerprints, but this technology wouldn’t rely on biometrics — it would rely on digital signals. Imagine logging into an app on someone else’s phone just by touch,” explained Shreyas Sen, a Purdue associate professor of electrical and computer engineering, in a press release.

“Whatever you touch would become more powerful because digital information is going through it.”

Wearable ‘internet within the body’

The technology establishes an “internet” within the body through which wearables send information. Typically, similar devices communicate via Bluetooth signals — but these are easily hackable from up to 30 ft (roughly 9 m) away, Sen explained.

To circumvent this design flaw, the Purdue University team’s technology keeps signals confined within the body — coupling them in what the researchers call an “Electro-Quasistatic range” — far lower on the electromagnetic spectrum than Bluetooth signals.

This is what allows information to be transferred via the human touch: even if one’s finger hovers 1 cm above a surface, it’s essentially out of range. To make a connection, users must physically touch the surface before financial or account information can transfer.

The researchers demonstrated their technology in the lab with a live person, who interacted with multiple surfaces. A finger hovering above a laptop sensor didn’t transfer a photo, but a direct touch successfully transferred the correct information.

The researchers also said this touch payment is more secure than Bluetooth or credit cards, since all it takes is the touch of a sensor.

“You wouldn’t have to bring a device out of your pocket. You could leave it in your pocket or on your body and just touch,” Sen said. The researchers also said their technology might also open up a new world of touch screen applications.

The new touch tech could also potentially replace card keys, since each wearable can be coded to a specific user — bringing us to a sci-fi future of automation where, for example, one’s car “knows” when its owner is close, opens the door, and prepares for the trip.