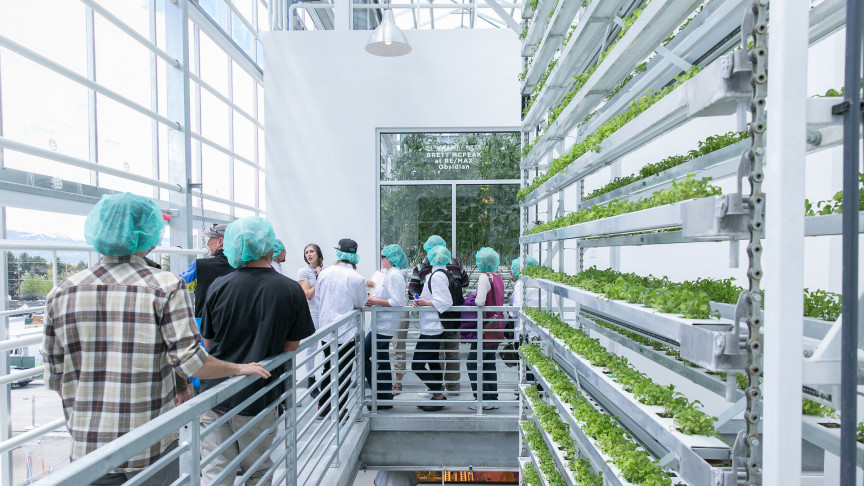 In an interview with Fast Company, Nona Yehia, CEO of Vertical Harvest, describes how “bringing the farm back to the city center can have a lot of benefits.”

It’s an initiative that is already taking place in many city centers worldwide due to the advent of vertical farming, an innovation that maximizes yield whilst minimizing land usage.

Most vertical farming projects fill warehouses or unused underground spaces. However, Vertical Harvest is currently working on a new building project in Westbrook, Maine that implements vertical farming into apartment buildings. Similar projects are also planned for Chicago and Philadelphia.

“I think what we’ve truly understood in the past year and a half—although we’ve been rooted in it all along—is that we have in this country converging economic, climate, and health crises that are rooted in people’s access to healthy food, resilient, nourishing jobs, and fair housing,” Yehia explained to Fast Company.

“And we saw this as an urban redevelopment tool that has the potential to address all three,” Yehia explains, referring to the technology implemented by Vertical Harvest.

‘A large-scale farm in a food desert’

The company — founded in 2015 on a vacant lot in Jackson — had the initial goal of creating jobs for people with physical and developmental disabilities in the area.

In 2019, a grant awarded by Fannie Mae allowed the firm to focus on integrating greenhouses into an existing affordable housing block in Chicago as a means for ensuring food security and nutrition for local residents.

“Part of this is providing healthy, nutritious food,” Yehia explained, “but also jobs at livable wages. We’re positioning all of our firms to address the new minimum wage level of $15 an hour with a path towards career development.”

The greenhouses in Vertical Harvest’s projects will fill the second, third, and fourth floors of buildings — approximately 70,000 square feet (21,336 square meters) of real estate. This, in theory, allows each vertical farm to produce approximately 1 million pounds (450,000 kilograms) of greens per year.

“By creating a large-scale farm in a food desert we are creating a large source of healthy, locally grown food 365 days a year,” Yehia says. Vertical Harvest is one of the most promising use cases we have seen for vertical farming, an innovation that promises a solution for the global land crisis.