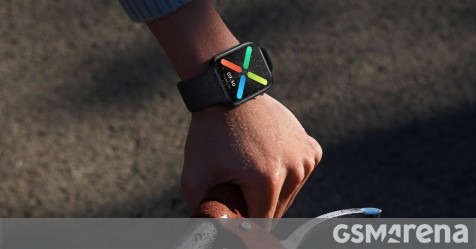 Earlier this month Oppo Germany published the specs of the international Oppo Watch, but today we are getting a proper announcement. The global Oppo Watch may share the name with its Chinses counterpart, but has significant differences on the inside.

The global Oppo Watch comes with two chipsets – the Qualcomm Snapdragon 3100 Wear, which helps it run Wear OS and the Ambiq Micro Apollo 3, which powers the proprietary system of what Oppo calls low-power mode.

The body is built from 6000-series aluminum alloy, while the rear surface is plastic + ceramic on the bigger version. The 41 mm Watch has only plastic and nothing else. Both versions are with a “fluororubber” strap, while the Stainless Steel version, introduced in China, will stay homebound.

The key selling point of the Oppo Watch is its dual boot solution – it can run either WearOS or a low-powered energy-saving mode depending on your needs. The first one brings all the neat smartwatch features like Google Play and GPay and OK Google support, while the latter offers only the essentials – the time, notifications, alarms – just like any other basic smart band.

The two modes vastly differ in their endurance – the Oppo Watch can go between 24 and 36 hours in Smart Mode (respectively for the 41/46 mm variants), or 14/21 days with Power Saver Mode .

Oppo claims 15 minutes on the magnetic charger would fill 46% of the battery and would need 75 minutes to reach 100%. However, this is the number for the bigger size, the smaller Watch can charge only up to 30% in 15 minutes, despite having a smaller cell – the full capacity is 430 mAh or 300 mAh.

The Oppo Watch 46mm and 41mm have Wi-Fi only versions, while the bigger one is also offered with LTE support with an eSIM chip inside. According to the press release, Vodafone, Orange, and Celcom carriers will offer it, but you can probably go with a different carrier as long as it has eSIM support and works on the required bands.

Pre-orders have already begun, with shipments scheduled for the first half of August.