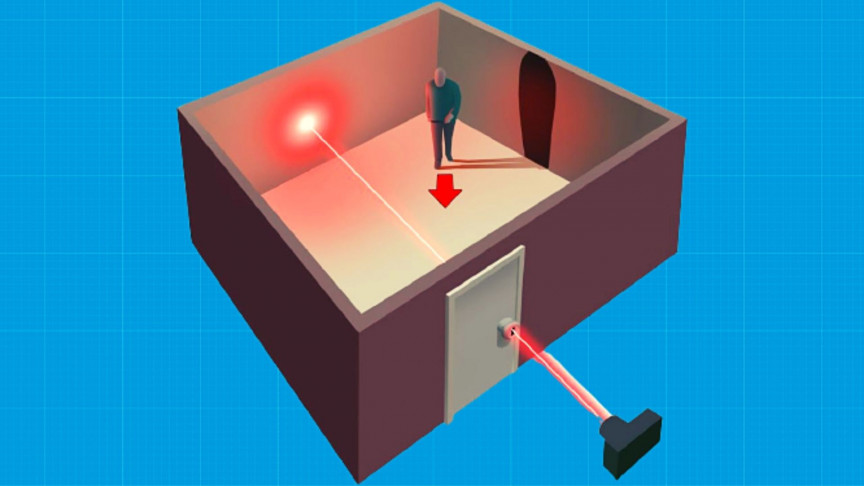 If you feel like there’s someone else in your room, look for a light.

For most of us, having a private room is a basic condition of functional living, but researchers have described a novel method called non-line-of-sight imaging that could expose every physical object within by peering through a keyhole with a single laser light, according to a page on Stanford Computational Imaging Lab’s website.

In other words, this new method turns your keyhole into a peephole.

Non-line-of-sight (NLOS) is an established technique that continuing research has refined to create cameras that can image objects lying behind corners beyond the field of view. In the past, this technique employed flat surfaces, like walls or floors that happened to be in line-of-sight with the hidden object and the camera, which enabled light pulses to move from the camera (typically lasers) to bounce off of the flat surface toward the hidden object, and then back the way it came, to the camera’s sensors. This information was then analyzed by algorithms to evaluate the duration elapsed between sending and receiving the signal to generate an image of physical objects beyond the obstruction. Naturally, this wasn’t a high-resolution capture, but details are sufficiently abundant to identify what kind of object was imaged.

This technique is commendable, and could even see applications in cases like autonomous car navigation, assisting onboard computers as they map a local environment lying just beyond-line-of-sight for potential hazards, especially when the vehicle passengers can’t see it. In other words, this technology could save lives. But there’s a big catch: so far, NLOS techniques need a large reflective surface that allows the light reflections returning from a hidden object to be measured.

New laser technique could check rooms for danger in advance

The keyhole imaging method was initially developed at Stanford University’s Computational Imaging Lab, and it gained its name because the only thing required to see inside a closed room is a single tiny hole (like a peephole) big enough to allow a laser beam to pass through and create a single point of light on the opposite interior wall. This latest advancement involves a laser bouncing off of a wall, then some object in the room, then again off the wall before returning through the keyhole to a camera equipped with a single-photon photodetector that can measure the time between sending and receiving the signal. If the obstructed object is static (or not moving), the new technique doesn’t have enough information to identify what it is. But to bypass this, researchers have realized they can image a moving object with pulses of light from a laser capable of generating enough viable data during a longer exposure time to provide enough information for an algorithm to build an image of the object.

Sadly, this technique resulted in even lower quality images than earlier NLOS techniques, but there is still sufficient detail for users to guesstimate the shape and size of the obstructed object. For example, a wooden mannequin would appear like a haunted angel, but when combined with a fully-trained image recognition AI, it isn’t that difficult to say the novel contraption is detecting a human-shaped object. Eventually, this will probably be used by the police or the military, so they can assess the risks posed by peacefully entering versus storming into a room with guns blazing using nothing but a bullethole or structural defect in the wall or window. NLOS techniques might also be applied to drones like Boston Dynamics’ Spot the robot dog, to safeguard the expensive mechanical marvel while surveying dangerous terrain or searching a home for potentially armed suspects. This is exciting technology, but like all advancements, whether it’s good or bad depends on who uses it, and why.