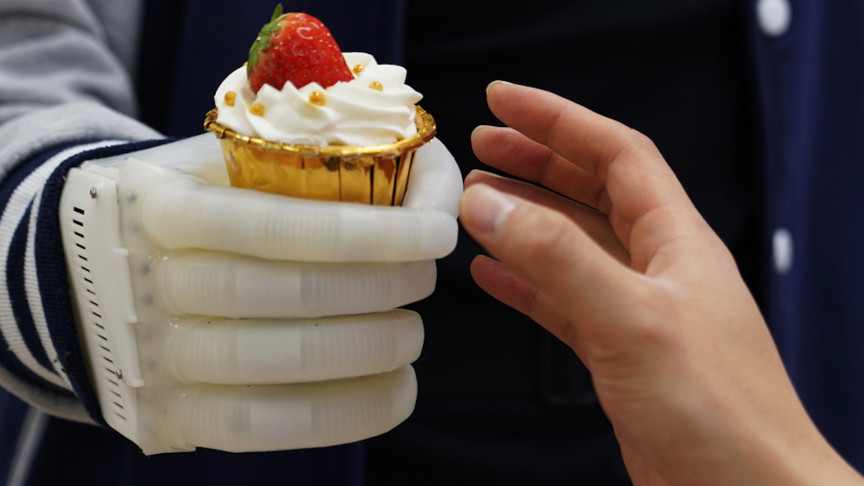 The field of neuroprosthetics was around in its earliest stage in the 1950s, but it’s only just starting to show its true potential, with devices that allow amputees to feel and manipulate their surroundings.

A group of researchers from MIT and Shanghai Jiao Tong University, recently collaborated with the goal of making neuroprosthetic hands, which allow users to feel in a more accessible way. The result is an inflatable robotic hand that costs only $500 to build, making it much cheaper than comparable devices, a post from MIT reveals.

The researchers behind the new prosthetic say their device bears an uncanny resemblance to the inflatable robot in the animated film Big Hero 6. The prosthetic uses a pneumatic system to inflate and bend the fingers of the device, allowing its user to grasp objects, pour a drink, shake hands, and even pet a cat if they so wish. It allows all of this via a software program — detailed in the team’s paper in the journal Nature Biomedical Engineering — that “decodes” EMG signals the brain is sending to an injured or missing limb.

The prosthetic, which weighs roughly half a pound (200g), restores an approximation of the sense of feeling to its users via pressure sensors at the tip of each finger. When these sensors are touched or squeezed, each one sends a signal via a wire to a specific spot on the amputee’s residual limb, letting them know whether it is the thumb, for example, that is pressed. What’s more, during tests, two volunteers found that it took them only 15 minutes to learn to start writing with a pen, stacking checkers, and picking up delicate objects such as fruit and bread. One volunteer used the device to work on a laptop, pet a cat, eat crackers, amongst other daily activities.

“This is not a product yet, but the performance is already similar or superior to existing neuroprosthetics, which we’re excited about,” said Professor Xuanhe Zhao, professor of mechanical engineering at MIT. “There’s huge potential to make this soft prosthetic very low cost, for low-income families who have suffered from amputation.”

We may be some way off from seeing this technology reach the market, however, when it does, it has the potential to completely change the lives of low-income families and people with disabilities. On the other end of the spectrum, firms like Neuralink and Synchron are working to build brain-computer interfaces that will allow users to control digital devices using their minds and will also aim to treat brain-related disabilities — though these will likely take years to develop and will only be available to the very wealthiest to start with.

The MIT and Shanghai Jiao Tong University researchers behind the inflatable, accessible prosthetic hand say their ultimate goal is to release a low-cost device that almost anyone can buy. But before they can get to that point, their next goal is to improve the device’s design, making it more customizable and more efficient at decoding electrical inputs.