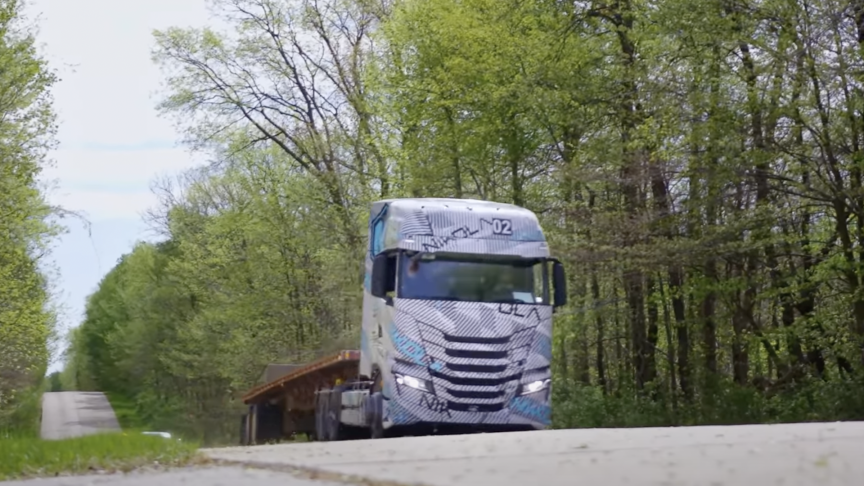 Following last week’s indictment of Nikola Motors founder Trevor Milton for allegedly misleading investors, the hydrogen truck startup has posted footage of one of its trucks driving uphill to indicate that it is not as far from delivering on its promises as some might now believe.

The footage is a direct response to one of the main fraud claims brought against Milton in last week’s indictment. Specifically, that a previous video of one of the company’s trucks showed the vehicle simply rolling downhill, but it was filmed at an angle to give the impression that it was driving on its own power.

In the description for the new footage (which can be viewed below), Nikola Motors says, “Rough terrain? Pull loads up a 12% grade? We’ve got this. Watch as the Tre BEV prototype is put through the paces in durability testing at the Indiana proving grounds.”

The startup first revealed the footage at the same time as revealing its second quarter financial results on Tuesday, August 3, and it has also posted the video on its YouTube channel. Though the footage of the company’s latest prototype going uphill might renew the faith of some of its investors, the outlook certainly isn’t rosy in Nikola’s earnings call. The company now estimates it will deliver half the number of trucks this year than it had claimed in its original estimates. What’s more, the company says that the global chip shortage, caused in part by the pandemic, could mean that it doesn’t even reach that much lower target.

Nikola Motors was the first of a list of high-profile environmentally-focused transportation startups to merge with a special purpose acquisition company (SPAC) in 2020. It also now joins a list of companies, including Tesla, whose CEOs or former CEOs are under intense scrutiny from the Securities and Exchange Commission (SEC) following reports of misleading claims about the state of their technologies. Last week’s SEC indictment filed against Nikola Motors CEO Milton, stated that “Milton sold a version of Nikola not as it was — an early-stage company with a novel idea to commercialize yet-to-be proven products and technology — but rather as a trail-blazing company that had already achieved many groundbreaking and game-changing milestones.”

The same filing also claimed that for a previous promotional video released by Nikola, titled “Behold, the Nikola One in motion,” the company “had the truck towed to the top of a hill on a remote stretch of road and simply filmed it rolling down the hill.”

Since that time, Nikola Motors has moved to distance itself from its founder and former CEO. We reached out to the company and they replied with the following statement: “Trevor Milton resigned from Nikola on September 20, 2020, and has not been involved in the company’s operations or communications since that time. Last week’s government actions are against Mr. Milton individually, and not against the company. The company has cooperated with the government throughout the course of its inquiry. We remain committed to our previously announced milestones and timelines and are focused on delivering Nikola Tre battery-electric trucks later this year from the company’s manufacturing facilities.”

Though the new uphill prototype footage is a good start, Nikola Motors undeniably faces an uphill battle to restore its reputation amid parts shortages. All of this may be too much for a company that also faces the challenge of selling hydrogen as a viable option for long-haul truck operations. Elon Musk, for example, recently stated that “hydrogen is a staggeringly dumb form of energy storage for cars,” though companies such as Toyota and BMW disagree and are investing in the technology.