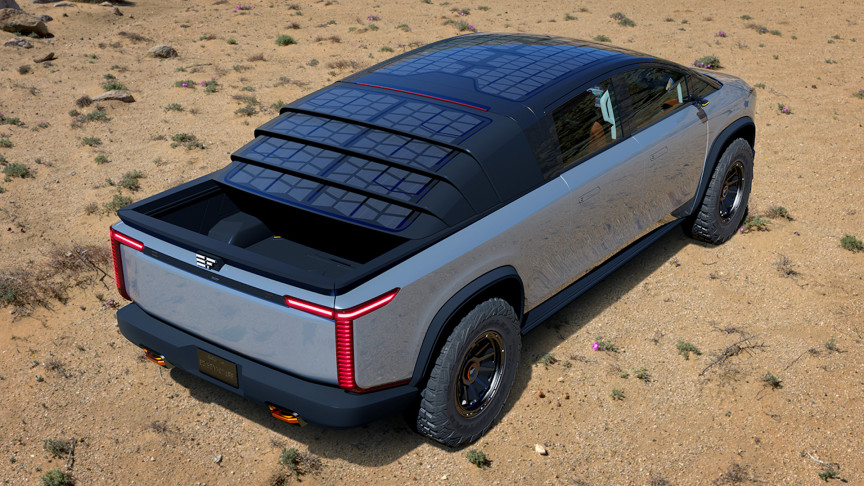 Chinese automaker EdisonFuture, a subsidiary of renewable energy firm SPI Energy, revealed the first images of its EF1-T pickup truck EV, a report from InsideEVs explains. The pickup has a sloping retractable solar panel roof that can add range while the vehicle is on the road.

The EF1-T has a four-door configuration as well as an open bed in the back that can be fully covered to add extra range via solar power, even while driving. The vehicle has obvious similarities to Tesla’s Cybertruck, which somewhat surprisingly added a solar panel option after it was first unveiled — Tesla CEO Elon Musk has, on several occasions, voiced his skepticism over solar charging cars.

In a press statement, EdisonFuture said the EF1-T, as well as a van version of the vehicle called the EF1-V, feature “a uniquely designed solar mosaic technology that provides a stunning visual signature while also harnessing the power of the sun to recharge the batteries, enabling work vehicles to continuously charge while in the field.”

Bizarrely, as far as we can tell, the automaker hasn’t actually released any information regarding the battery size, range, or solar charging specifications of the EF1-T, though a prototype of the vehicle is due to go on display at the LA Auto Show in mid-November, so we may learn more information then. EdisonFuture also said it will begin accepting reservations for the pickup during the show.

While we’re likely pretty far off seeing vehicles that run solely on solar power, we’re increasingly seeing pickups and cars fitted with solar panels as the technology matures, allowing for added range figures that aren’t negligible. Dutch automaker Lightyear, for example, states on its website that its Lightyear One car can add 7 miles (12 km) of range per hour via solar charging.

The company eventually aims to develop vehicles that can go months without charging. Stay posted to learn more about the range figures of the EF1-T when we find out more in the very near future.