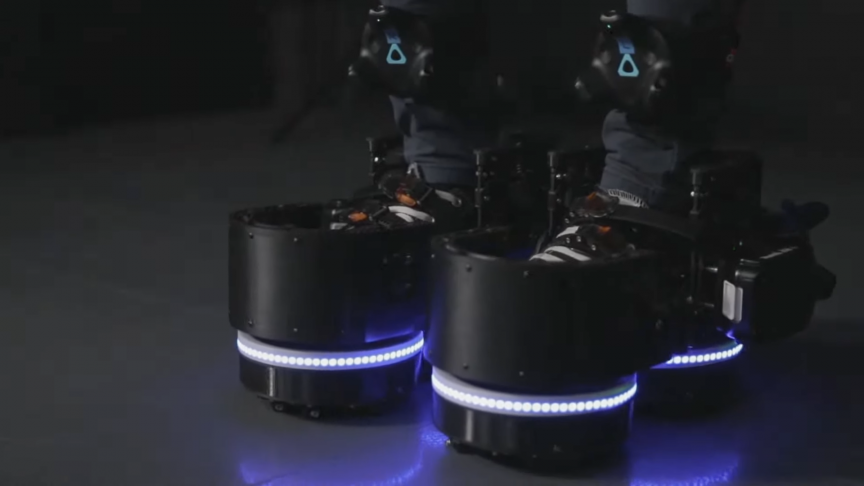 One of the issues with virtual reality headsets to date has been safety. Get too immersed in the experience and you might find yourself leaping and bounding in virtual reality only to smash against the floor in your momentarily-forgotten physical reality.

A report from YankoDesign reveals that the firm, Ekto VR, believes it may have a solution to this problem with its new “moon boots”. The company’s new technology allows users to walk on the spot in order to move in a virtual space.

Walking on the spot

The boots feature an array of motorized wheels, almost like small stable marbles, on their soles that spin in the opposite direction to the wearer’s forward motion. These allow the user to walk on the spot as if on a treadmill, giving them the feeling that they are moving forward. Of course, the technology is used in conjunction with a VR headset, meaning that the entire setup will essentially trick the user into thinking they are navigating the virtual space on their own two feet.

The project is still in its early development phase, meaning it likely won’t be hitting the market for a while yet. If Ekto VR could make the technology reduce the resemblance to chunky cyberpunk platform shoes just a little bit, that would likely go a long way to improving things. The device does undeniably hold the potential to help change people’s limited interaction with VR, which is currently mostly reliant on joystick controllers that are held in the wearer’s hand.

Improving metaverse immersion for all

The “infinite walking” problem — a more technical term used to refer to the issue of VR users face planting — has been around since the advent of virtual reality in the 80s. Essentially, it’s the problem of having users believably traverse virtual space using a technology that’s all about immersion. Another company, Virtuix, has opted for a different solution to the problem. The company is building an omnidirectional treadmill for VR users, similar to the ones seen in the Steven Spielberg movie, ‘Ready Player One’.

If Ekto VR and other similar projects deliver on their promise, the technology could be crucial for the uptake of new metaverse projects, that will greatly rely on that immersion factor to be successful. Other projects aimed at improving the immersion of these virtual spaces include VR gloves with haptic feedback from a company called Teslasuit. The technology is designed to allow users to “feel” their surroundings via vibrations, using haptic feedback technology used in videogames, which has also recently been adapted to help the visually impaired be aware of their surroundings using the vibrations. VR has certainly been slow to deliver on the hype of recent years, but these new projects could greatly help to boost the non-visual side of things, making for a more well-rounded, and compelling proposition.