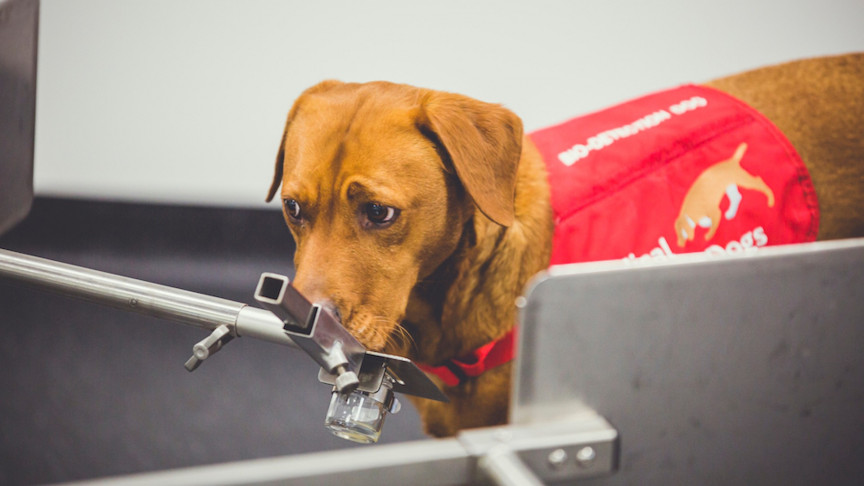 Trained dogs can detect some of the world’s most serious forms of cancers and other diseases just by using their noses. Now, a team of researchers is using this method to create a “robotic nose” that mimics this process to more rapidly detect diseases in the future.

The study comprises researchers from MIT and other institutions, as well as the U.K.-based charity Medical Detection Dogs. It was published in the journal PLOS ONE.

How dogs sniff diseases and how the device works

Medical Detection Dogs‘ dogs are able to sniff out some of the most aggressive forms of cancer thanks to their training. This training, however, takes time, hence the researchers’ desire to create a faster process using devices and AI.

Results from the study showed that these trained dogs correctly identified positive prostate cancer samples 71 percent of the time, and correctly ignored negative samples — including people with other prostate diseases.

The “robotic nose” mimics this sniffing ability to detect such diseases thanks to an electronic device — which could one day come in the form of an app. Dr. Andreas Mershin, co-author of the study and from MIT, said “Imagine a day when smartphones can send an alert for potentially being at risk for highly aggressive prostate cancer, years before a doctor notices a rise in PSA levels.”

Mershin and the team have been working on their device over the past few years, which currently comes in the form of a miniaturized detector system “that incorporates mammalian olfactory receptors stabilized to act as sensors,” explain the authors. This data is streamed in real-time thanks to capabilities that can be found in smartphones.

Mershin explains that their detector system is, in fact, 200 times more sensitive than a trained dog’s nose in terms of being able to detect and identify minute traces of different molecules. However, it’s also “dumber” as Mershin said, which is where the AI comes into play.

The researchers state that they now have a solid framework from which to continue working and developing so as to bring the technology up to the level for clinical use.