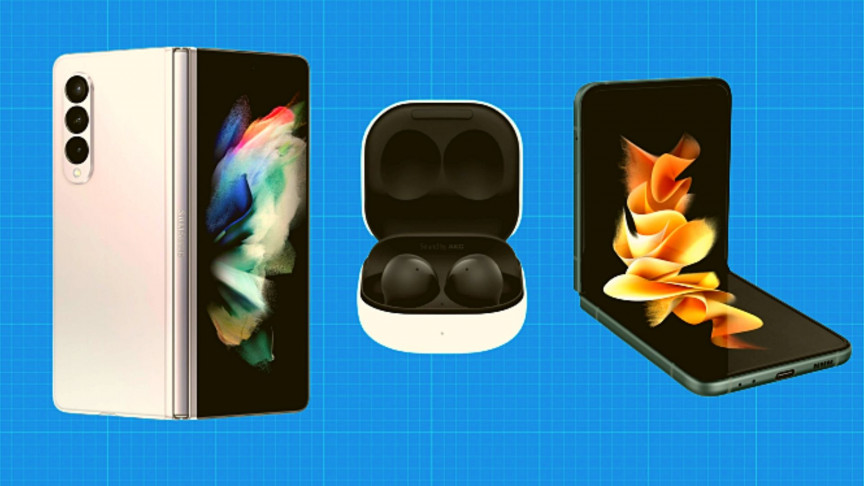 Some mistakes were meant to be.

With Samsung Unpacked coming on August 11, expectations are running high, but a series of recently-leaked images demonstrates that the South Korea-based tech giant has in store for consumers, including the Galaxy Watch 4, Galaxy Buds 2, Galaxy Z Flip 3, and Galaxy Z Gold 3, all way ahead of launch, according to several tweets from the leaker Snoopytech.

So strap in for a tour of nearly the entire lineup of Samsung’s latest.

The images show the Z Fold 3 in a plurality of colors, in addition to a detailed picture of the phone’s under-display selfie cam. This placement is part of Samsung’s ongoing efforts to design front-facing cameras that can be equipped under the displays, so that users aren’t distracted, and don’t have to see it when they aren’t using it. But Samsung hadn’t yet used this design on available devices, until now. The Z Fold 3’s design doesn’t stray far from earlier models, but there are differences, like a more streamlined and less bulky rear camera section, along with smaller bezels around the display. The newly-leaked images don’t confirm the specs, but word is the Z Fold 3 is equipped with a main 7.55-inch folding display, which means it should resemble the size of earlier Galaxy Folds.

A German tech site called Winfuture.de also claims we now have press renders for both the Galaxy Z Flip 3, and the Samsung Galaxy Buds 2.

Samsung’s Galaxy Z Flip 3 is slated to be a streamlined, compact addition to the company’s forthcoming foldable lineup. And, as seen above, the Z Flip 3 carries on the basic design of the last one, but with a slightly expanded external cover screen. But, sadly for some, the Z Flip 3 likely won’t come equipped with native stylus support, despite the not entirely underwhelming solace in knowing that Samsung’s foldable screen technology will exhibit higher durability. Beyond these facts, there remains a deeper question: Will there still be a screen crease where the new phone folds in half? The Z Flip 3 is ostensibly poised to become the company’s main lifestyle-purposed foldable phone. And the newly-leaked images point to the ability to select from a full spectrum of color designs, including dark green, gold, black, and light purple.

Rumored to start at $1,000, the Z Flip 3 could present consumers with a difficult lifestyle choice: do you want a phone with a standard glass display, or do you want the hot new foldable screen, since they’re likely more durable, and at the same price? Less devastating are the Galaxy Buds 2, which will probably replace their predecessors, the Galaxy Buds+ and Galaxy Buds. In the leaked images, we see a Marie Kondo-worthy minimalist design that comes in an array of basic colors (green, white, and black). But in a major upgrade to the state-of-the-art, Samsung’s new wireless earbuds appear to come with active noise cancelation — a must for city-dwellers. In the past, ANC-enabled Samsung earbud-lovers had to dish out a hefty wad of cash for the pricier Galaxy Buds Pro, or even the Galaxy Buds Live. But even with the integrated ANC of Galaxy Buds 2 at a lower price, since it retains a unique open acoustic design.

Samsung’s forthcoming Galaxy Buds 2 come in a wireless charging case, and support IPX2 water-resistance, which means they won’t die from a little sweat or splash to the face. A Gizmodo report places the European pricing at 149 euros, which it claims is roughly $150. But a quick conversion from euros to dollars would place the Galaxy Buds 2 closer to $175. Last but not exactly least, 91mobiles shared some leaked images of the upcoming Galaxy 4 Classic that include clips of the setup process. If you think about it, this makes the leak the first online reveal of Samsung’s novel One UI Watch. But since the setup clips only advance to the intro and time-setting menus, we can’t say what the One UI Watch will look like, thinking on an aesthetic and functional level.

Basically, Samsung’s entire forthcoming lineup of next-gen devices is now public knowledge, despite the official reveal being a week away. Of course, there will be more specs and information during the official event, but from a new OS for the smartwatch, two new foldable phones, and a sick pic of wireless earbuds thrown into the mix, no one looking for new mobility accessories need be left out, once Samsung’s Unpacked event hits your screens on August 11, which you should definitely check out here.