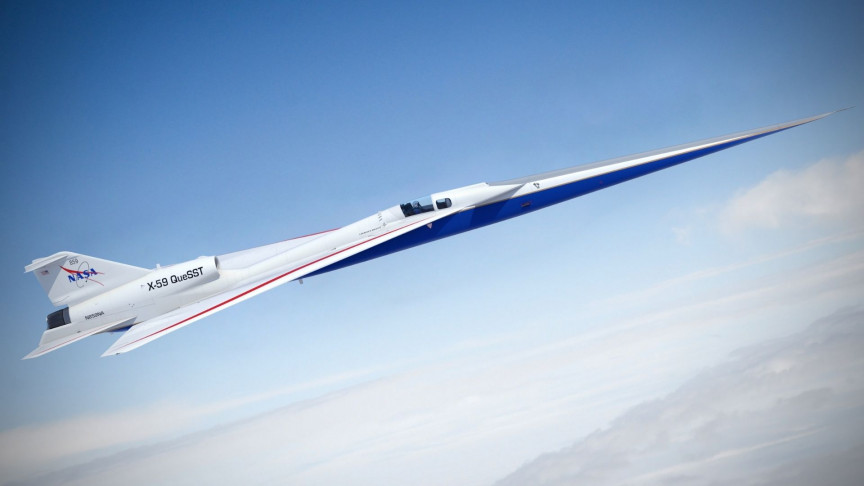 Newly released timelapse footage from the US space agency shows the merging of the “the major aircraft sections” of NASA’s X-59 Quiet SuperSonic Technology (QueSST) aircraft, a blog post from NASA explains.

The X-59, whose design was first revealed to the public in 2019, is gradually taking shape as NASA, in partnership with Lockheed Martin, aims to create a jet that could reignite commercial supersonic air travel almost two decades after the Concorde’s last flight.

The quietest of sonic booms

The construction of X-59 is taking place at Lockheed Martin Skunk Works in Palmdale, California. Once completed, the supersonic jet will be capable of cruising at Mach 1.4, which is 925 mph (1488 km/h).

The X-59 was specifically designed with a thin 30-foot-long nose that lowers the sound of the sonic boom when the jet surpasses the speed of sound at 767 mph (1,235 km/h). That should allow it to reach supersonic speeds soon after takeoff. The Concorde, by comparison, had to remain at a lower speed over populated areas, due to its immense sonic boom.

NASA awarded Lockheed Martin a $247.5 million contract to develop the X-59. The company is expected to finish the construction of the supersonic jet this year before moving onto the test flight phase in 2022. According to Inceptive Mind, the finished aircraft is expected to be 94 feet long and have a wingspan of 29.5 feet. It will have a maximum takeoff weight of 32,300 lb (14,700 kg) and should reach top speeds of Mach 1.5 (990 mph).

The short video clip released by NASA (featured above) shows the piecing together of various parts of the X-59’s fuselage and its wings. “We’ve now transitioned from being a bunch of separate parts sitting around on different parts of the production floor to an airplane,” said Jay Brandon, NASA chief engineer for the Low Boom Flight Demonstrator (LBFD) project. A caption in the NASA blog post also says that the construction process shown in the video “marks the first time the X-59 resembles an actual aircraft.”

The engineers working on the project used laser projections to quickly check that pre-drilled parts were correctly fitted during construction, NASA explained. “The extensive use of features and pre-drilled, full-size fastener holes has significantly reduced the time it takes to locate and fit parts, especially mating large assemblies like this,” said David Richardson, Lockheed Martin’s program director. “It is sort of like how Legos go together.  We used the laser tracker to make sure it is all aligned per the engineering specs before we permanently bolted it all together.”

NASA and Lockheed Martin aren’t the only companies aiming to form part of a resurgence in supersonic commercial flight. Boom Supersonic, for example, recently told IE in a March interview that it aims to “remove the barriers to experiencing the planet.” The company was recently granted a $3 billion contract from United Airlines as part of its plans to go carbon neutral. Though the X-59 only has space for a pilot with no passengers, NASA aims to eventually develop the aircraft’s “quiet” supersonic jet technology for commercial flight and possibly also for the US military. The new aircraft, nicknamed by some as the “Son of Concorde”, signals a new era of commercial supersonic flight.