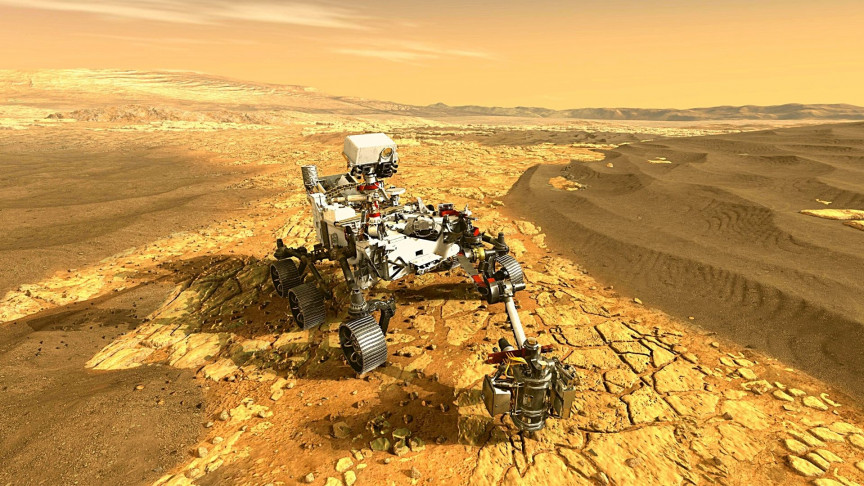 NASA’s Perseverance rover is slated to land on Mars after a seven-month journey from Earth — on a mission to find signs of ancient Martian life. The mission will start with a heart-stopping “seven minutes of terror” descent into the thin atmosphere, where no one will know if the rover made it or not until wheel touchdown signals the beginning of the most advanced robotic rover to navigate the surface of the Red Planet.

The Perseverance lander is slated to touchdown on Mars at 3:55 PM EST on Thursday, Feb. 18, and NASA’s coverage will stream live on the agency’s YouTube channel (featured below).

“Very soon as we approach cruise-stage separation, the transmitter on this rover we’ve been using all the way to get to Mars is going to be turned off,” said a NASA official during the live stream of Perseverance’s landing attempt.

“Once the cruise stage is gone, there’s another radio that will continue transmitting a tone so that — like a flashlight — it will allow us to at least see that the vehicle is still ‘on,'” he added. “But soon after that, it won’t be long before we’ll be able to hear more ‘ones and zeroes’ coming from the spacecraft.”

There are one thousand things that have to go right, he added. “We’ve loaded the dice to make this thing succeed. But if we do fail, I can tell you we’ll have the data — we’ll know why, we’ll figure it out.”

This landing attempt comes on the heels of a seven-month journey from Earth to Mars — across 125 million miles (202 million kilometers). Once it’s landed, the rover will broadcast data in high-definition 4K, collect noteworthy rock samples for a crucial sample-return launch, and fire the first interplanetary helicopter into the Red Planet’s skies.

The science mission of the rover will also involve laser-targeting, taking high-resolution photographs, and exploring the ancient delta inside the Jezero Crater.

Perseverance could become crowning achievement of 50 years’ study of Mars

This mission is the result of a decade of tireless work, and NASA officials were ecstatic during a press conference held on Wednesday, Feb. 17. As the most advanced rover to ever touchdown on Mars, Perseverance is expected to become a crowning achievement to 50 years of remote and robotic investigations of Mars — from scanning for water signs, to the first landings, to the initial rover rollouts like Pathfinder in the 1990s, and later in the 2000s.

Rovers Spirit and Opportunity were the first long-term missions on Mars — which made touchdowns in 2004 and continued functioning until roughly 2010 and 2018.

About these earlier missions, NASA’s Director of Planetary Science Lori Glaze said the mission control team was “following the water, trying to understand the history of water on Mars and understanding if there were ever a time when there was enough liquid water present on the surface of Mars to support life.”

“This was followed, of course, by Curiosity — where we really took the next step to understand the habitable environments on Mars,” added Glaze. “We were able to confirm the presence of a lake of liquid water on the surface of Mars that was sustained over a period of time, and also identify the complex organic molecules that would be the building blocks of life.”

Perseverance using AI to guide itself into a soft touchdown

All of the knowledge amassed from earlier ventures to space helped prepare NASA for the Perseverance rover, said Glaze, “which is going to take that next step — to really, actually look for those signs of life.”

Notably, Perseverance will use artificial intelligence to scan and map the safest landing site in the minutes before touchdown. Once the AI has processed the data, the rover will make final preparations to ensure a soft connection with the surface of Mars. Computer-assisted landing technology is necessary because, unlike low-Earth orbit missions, it takes radio signals far too long for precise control — since any signal can only travel at the speed of light.

The landing on Mars will be the first planetary challenge for NASA’s Perseverance rover — also called “Percy” — as it careens into the Red Planet’s atmosphere. In the past, landing sites were typically centered within wide, open plains. But Percy’s Jezero Crater landing site is more fascinating — with sand dunes, rock fields, and craters, there’s no shortage of adventures for the rover, upon touchdown.

This is developing news about the upcoming landing attempt of NASA’s Perseverance rover on Mars, so be sure to check-in with us for more updates on this historic event.