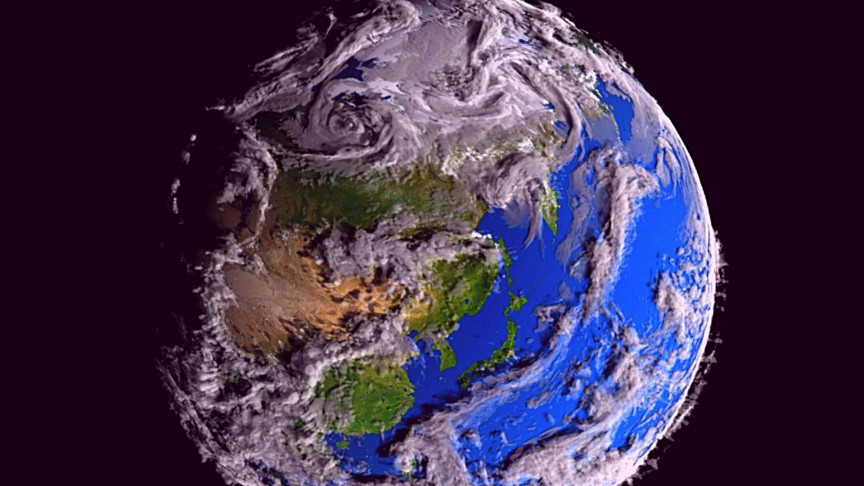 Compared to Mars, Venus, or Jupiter, the Earth is a nice place to live. It’s temperate, full of mineral-rich water, and, at least for now, has enough usable soil to feed nearly every human still alive. And to some, it moves in life-like patterns.

A recent simulation of the Earth’s beguilingly complex atmosphere called GeoSpy modeled the interconnected motion of our planet’s atmosphere for two years, and it serves to remind us how easily we can fundamentally shift and destroy the very conditions that brought us into existence. But we can still use the tools of science and engineering to explore the forces that gave rise to and sustain all known life.

Look on the wonders of the Earth, and be humbled.

Decades ago, a British scientist named James Lovelock posited the idea that all organisms on Earth interact to regulate the planet’s environment. According to him, life interacts both physically through the air, and chemically, with the rocky crust and waters churning to maintain optimal conditions for the formation and continuity of life. He even thought the planet behaved like a living organism, and gave it a name: Gaia, taking a cue from the Greeks’ Earth goddess. Later dubbed the Gaia hypothesis, it at times lost touch with its scientific routes, gaining a mystical interpretation in a public spurred by New Age sentiments that rely on pseudoscience like crystals to build a fictional world of personal meaning. Consequently, many scientists eschewed the idea of a living Earth, shunning the very name “Gaia.”

However, the advanced state of global climate change has at times brought the Gaia hypothesis back into the spotlight, and played a significant role in the way some scientists analyzed the evolving planetary environment. True or not, the idea has helped to galvanize scientific efforts to study the Earth as a single, maddeningly complex environment, with an emphasis on how it maintains the delicate balance required to support the human race. Some may argue that any belief, no matter how noble its intentions, is not only a waste of time, but fundamentally anti-scientific and counterproductive. But with the advent of advanced computing capable of simulating much of the world’s atmosphere, the initial drive to scale research to the level of Earth as a totalizing system of processes might make at least considering ideas like the Gaia hypothesis worthwhile.

The Earth may not be alive, but it is fundamentally interconnected

Consider this incredibly beautiful 3D simulation, called GeoSpy. It captured snapshots of the global system every thirty minutes, producing roughly 6 petabytes of data, including a category-four typhoon in the Western Pacific Ocean. It’s difficult to not feel overwhelmingly moved by the sheer complexity of our world. And there’s more to come: Future work will take this visualization to even higher resolutions, and accelerate studies of the Earth’s climate. In space, only a thin sliver of highly complex conditions can support human life, as our search for habitable exoplanets has shown.

With this in mind, it’s tempting to think the Earth is fragile. Even Lovelock knew that the global climate can be changed not only by quick yet cataclysmic disasters like an asteroid impact, but also by human industry. This doesn’t, however, mean that a shift in the Earth’s ecosystem will necessarily cause its interconnected organisms to completely die off. “The idea that we’re wrecking the Earth is wrong; but wrecking ourselves is another story,” said a University of Massachusett Microbiologist named Lynn Margulis, in an archived report from The New York Times.

Even if humans go extinct, the Earth will go on and be just fine without us (although a lot of other species would die with us). Among other things, this means that if we want to remain part of the planet’s ecosystem, we have to use our best evolutionary advantage — tools (or technology) — like we mean it. We have to expand and transform our understanding of ourselves and our planet. Because, if or when we come to know the totality of the world that sustains us, the interconnectedness of Earth’s systems will doubtless be fundamental. And, while this stunning simulation of Earth’s atmosphere is still just a dim shadow of the one churning relentlessly beneath our feet, it’s also a stark reminder that, if one system on our planet weakens or dies, it will be felt everywhere.