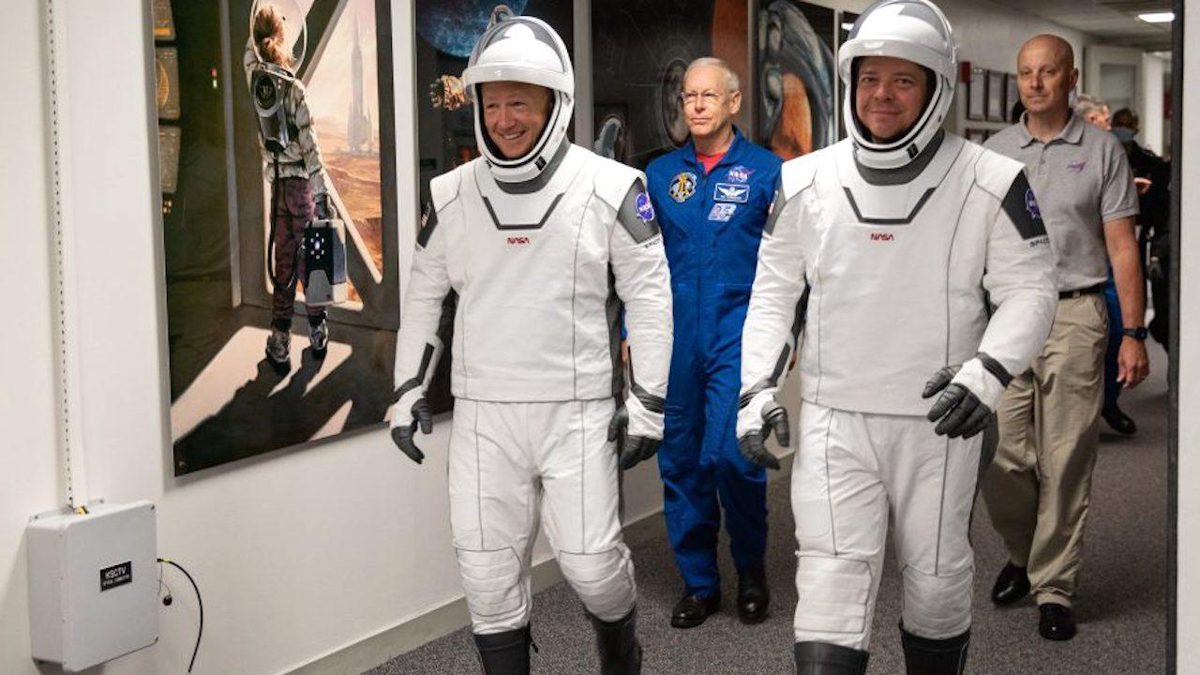 NASA and SpaceX received the green light to carry astronauts Robert Behnken and Douglas Hurley to the International Space Station this week. Following a final review, the Falcon 9 rocket and Crew Dragon spacecraft are ready for human spaceflight.

Now, the only thing standing in the way of Wednesday’s history-making launch is Mother Nature. According to the U.S. Air Force 45th Weather Squadron, there is a 40 to 60 percent chance of “unfavorable” weather: primarily precipitation and thick clouds.

The weather was bright and sunny for Saturday’s dress rehearsal, during which Hurley and Behnken (pictured, left to right) suited up and climbed aboard the Crew Dragon. “It was a really good review today,” Norm Knight, deputy director of flight operations at the Johnson Space Center, said in a statement. “From a crew perspective, we were very happy with the discussions that took place—the thoroughness of the review. We’re definitely ready to press forward.”

The astronauts remain in quarantine—a routine part of pre-launch preparations (and seemingly not related to the COVID-19 pandemic). The launch is scheduled for 4:33 p.m. ET on Wednesday, May 27, from Launch Pad 39A at the Kennedy Space Center in Florida.

Upon arriving at the ISS, Behnken and Hurley will join Expedition 63 crew members Chris Cassidy, Antoly Ivanishin, and Ivan Vagner for research, operations, and maintenance. They are also expected to run tests on the Crew Dragon, ensuring the spacecraft is capable of future missions that may see it connected to the station for up to 210 days.

“I think the on-orbit crew is definitely ready for some company, and very much looking forward to the launch this Wednesday,” Kirk Shireman, manager of NASA’s International Space Station Program, said. “The ISS team is ready to support the docking of Crew Dragon.” The mission’s duration is to be determined after its arrival; once complete, SpaceX’s Crew Dragon will undock from the station, de-orbit, and return Hurley and Behnken to Earth.