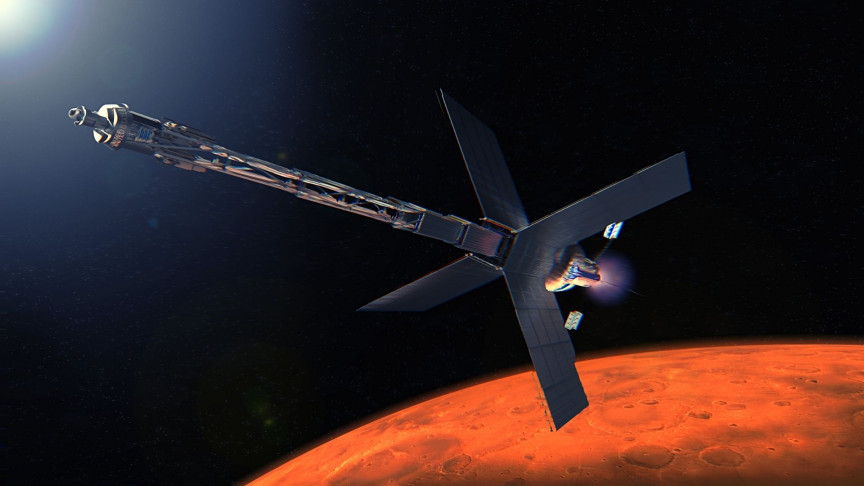 There are many competitors, but it’s mainly one that saw aerospace experts teaming up with NASA on Wednesday, urging Congress to hasten and scale-up investment to spur the development of nuclear-propelled spacecraft, in hopes of maintaining the United States’ lead in space, according to a Congressional committee hearing.

And that competing nation is China.

Nuclear-powered spacecraft could keep the US ahead of China

The United States’ space agency thinks spacecraft powered via a nuclear thermal rocket could reach Mars in only three or four months, bringing astronauts to the Red Planet’s doorstep in half the time required by conventional, liquid-propellant rockets. “Strategic competitors including China are aggressively investing in a wide range of space technologies, including nuclear power and propulsion,” said Senior Advisor Bhavya Lal for budget and finance at NASA, during the congressional committee hearing on Wednesday morning. “The United States needs to move at a fast pace to stay competitive and to remain a leader in the global space community.”

This came as additional reports suggested China had successfully tested a new orbital rocket potentially capable of delivering nuclear weapons at supersonic speeds. This is especially dangerous because, lacking the long warning window ballistic missiles afford (since they trace a long, slow arc around the world), hypersonic missiles armed with nuclear warheads could circumvent early-warning systems, causing casualties from a strike to soar like never before. Defense technology and advances for space exploration are categorically distinct, but both both reflect larger geopolitical stakes that are rapidly expanding into space. And, in less than a year, China has made considerable strides to close the gap between its space program, and those of the U.S. and its allies, landing a rover on Mars, beginning assembly of a low-Earth orbit habitable space station, and even striking a deal with Russia to install a base on the surface of the moon.

“If the United States is serious about leading in a human mission to Mars, we have no time to lose,” said U.S. Representative Don Beyer, who is chair of the committee. “Congress has prioritized development of nuclear space propulsion over the past several years, directing about $100 million annually for NASA to advance nuclear thermal propulsion capabilities with the goal of conducting a future in-space flight test,” added Beyer, in the hearing. NASA and the Department of Energy offered $5 million to three different companies in July to design a nuclear-powered spacecraft reactor. Officials at NASA argued that much more funding is necessary, but no solid dollar amount was set during the Wednesday hearing.

A central challenge in developing nuclear engines involves identifying or manufacturing materials capable of withstanding the heat and exposure necessary to function in space, explained Roger M. Myers, who is chair of a committee on space-worthy nuclear engines at the National Academies of Sciences, Engineering, and Medicine. “The risks associated with [nuclear propulsion] are a fundamental materials challenge that we think is quite likely solvable,” he said during the hearing. While this offers a glimmer of hope, many other challenges are lying in wait on the path to put humans on Mars.

“We’ve landed small rovers there but a spacecraft carrying humans would be much bigger,” said Lal. “We also need to make sure that the environmental control and life support systems can keep [astronauts] alive for two to three years.” But with a recent paper from UCLA researchers revealing that humans can only withstand four-year missions to Mars, advanced propulsion like nuclear-thermal engines could shave off crucial months of transit time, extending the mission window for astronauts investigating the Red Planet’s surface, and also bringing them home faster than was ever possible before.