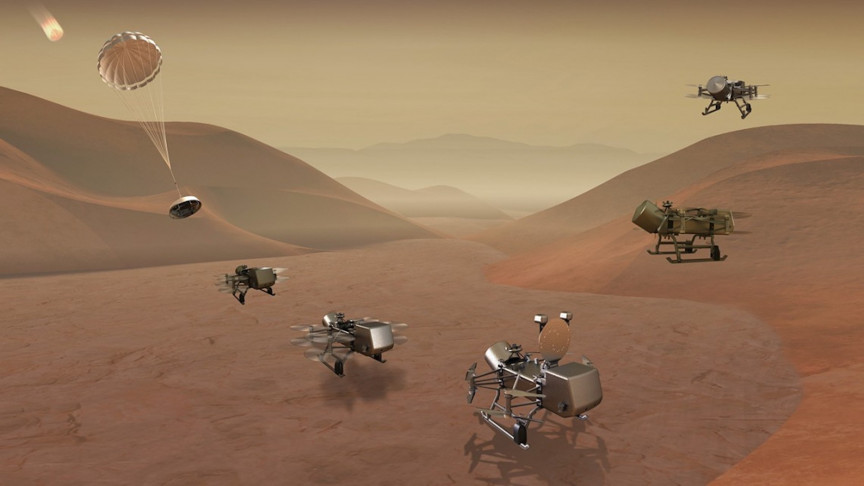 Saturn’s moon Titan has some surprising similarities to Earth. The planet’s largest moon has a thick atmosphere and it is the only other celestial object in the solar system that we know to have rivers, lakes, and seas. The main difference is that, instead of water, they are filled with liquid methane.

This draws up the possibility that there might be some form of life, perhaps very different to what we know on Earth, that has evolved on that moon with its methane liquid weather system and seas, a press statement from Cornell University explains.

With that possibility in mind, NASA is planning to send a rotorcraft to Titan in the mid-2030s. The team behind the mission project has just set out the ambitious goals for what has been dubbed the Dragonfly mission.

The mission’s rotorcraft will be a larger version of NASA’s Mars Ingenuity helicopter, which was the first human-built machine to perform a controlled flight off Earth. It will be designed to hop around different locations on Titan, taking samples as it goes. The main objective will be to see whether Titan hosts, ever has hosted, or has the possibility to host any form of life. The stated goals for the mission are outlined in a study in the Planetary Science Journal. As the team behind the mission put it, the Dragonfly will search for chemical biosignatures “from both water-based life to that which might use liquid hydrocarbons as a solvent, such as within its lakes, seas or aquifers.”

Titan is “an explorer’s utopia”

The last mission to Saturn, NASA’s Cassini space probe, sent back a wealth of images and data before its controlled crash into the planet, though that mission drew up more questions than it answered, according to the researchers working on Dragonfly. “Titan represents an explorer’s utopia,” said Dragonfly co-investigator and study co-author Alex Hayes. “The science questions we have for Titan are very broad because we don’t know much about what is actually going on at the surface yet. For every question we answered during the Cassini mission’s exploration of Titan from Saturn orbit, we gained 10 new ones.”

The team has already selected a landing site for the Dragonfly rotorcraft that it believes is a good place to start to look for chemical biosignatures and other possible signs of life. The mission will land in the sand dunes near Titan’s equator, allowing it to take samples of organic sediments before moving on to other regions — the craft will stay in each location for one Titan day (approximately 16 Earth days) before moving on. The Dragonfly will end up in Selk Crater, a 50-mile (80-km) wide crater where it will be more likely to find signs of water having mixed with materials on the surface.

Dragonfly is set to launch from Earth in 2026 and it won’t arrive at Titan until 2034. When it does, it will likely revolutionize our understanding of the solar system, provide some of the most stunning images ever sent from outer space, and also act as the first practical use of the technology developed and demonstrated in NASA’s historic first flight on Mars.