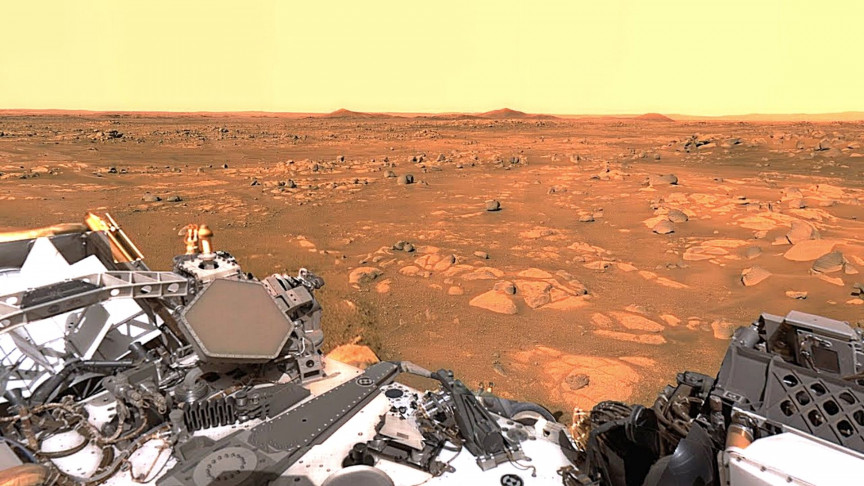 NASA’s Perseverance rover just captured a new 360-degree panorama of Mars’ surface, in an area of the Jezero Crater called “Van Zyl Overlook”, where scientists suspect an ancient lake of water once existed, according to a recent press release from the agency.

This performance of ultimate situational awareness marks the rover’s departure from its landing site, as it begins the science phase of the most advanced mission to Mars in history.

The latest rover from the U.S. agency to explore Mars planted itself in the Overlook while a small helicopter drone, Ingenuity, made its initial flights on the Red Planet, between April 15 and 26. The new 360-degree image was captured with the rover’s Mastcam-Z stereo imaging system, during the 13 days the rover spent parked. With 2.4 billion pixels, the panorama includes 992 distinct right-eye Mastcam-Z images, combined into a single, big-picture image. The constituent images were captured on the 53rd and 64th Martian days (called sols) of the rover’s mission.

The Perseverance rover is presently entering the science phase of its mission, while it departs the “Octavia E. Butler” site where the machine made its landing on Feb. 18 of 2021. The rover has already proved that we can generate oxygen from the Red Planet’s atmosphere, has taken more than 75,000 images, and even recorded several microphone clips, among the first audible sounds ever sent back to Earth from the Martian surface. “Over the next several months, Perseverance will be exploring a 1.5-square-mile patch of crater floor,” said NASA’s rover Project Manager Jennifer Trosper, in the press release from NASA. “It is from this location that the first samples from another planet will be collected for return to Earth by a future mission.”

When NASA’s Perseverance rover landed, NASA recorded a first-of-its kind video depicting the harrowing process of lowering the rover from a hovering drone, once it had reached the correct altitude. Three cameras mounted on the back shell of the vehicle captured high-rate imagery, despite one of them failing in the process. The descent (hovering) stage of the vehicle also recorded the rover from above, acting as a sky crane that softly set the rover on the Martian surface.

While no audio was recorded during the landing video, it was a sight to behold. Months later, China also landed a rover on Mars — in a major first for the country, placing it in the company of both the U.S. and the now-defunct Soviet Union, the only other nations to successfully land a mobile machine on another planet. While it may be several years before humans may venture to the Red Planet, we can take solace in knowing that NASA’s Perseverance is doing more than searching for life on Mars: It’s also a first but crucial step in testing the technology needed to settle real-life humans on Mars, who will begin to carry the human legacy beyond Earth, potentially ensuring our survival from the threat of extinction from the possibility of a cataclysmic planet-wide disaster.