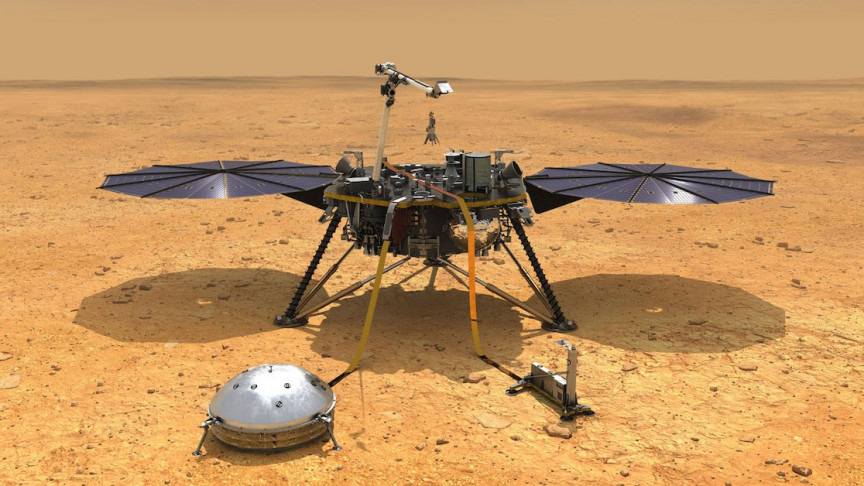 Since February 28, 2019, the heat probe part of NASA’s InSight Lander called the “mole” has been attempting to dig beneath Mars’ surface, to little avail.

So on Thursday, NASA officially announced that it’s terminating the mole’s journey on Mars, as the planet’s unexpected soil consistency has proven too tricky for this probe’s burrowing skills.

Built by the German Aerospace Center (DLR), the mole has been attempting to dig up to 16 feet (5 meters) beneath the Red Planet’s surface to gather information about its internal temperature. The hope was to better understand how the planet’s interior heat engine drives Mars’ evolution and geology.

Due to Mars’ soil, however, the probe couldn’t get the friction it required to hammer itself deeper into the ground. It only made it down to 0.7 to 1.1 inches (2 to 3 centimeters) below the surface.

The mole is part of an instrument called the Heat Flow and Physical Properties Package (HP3), and is a 16-inch-long (40 centimeters) pile driver that’s connected to the InSight Lander through a tether with temperature sensors.

“We’ve given it everything we’ve got, but Mars and our heroic mole remain incompatible,” said HP3’s principal investigator, Tilman Spohn of DLR. “Fortunately, we’ve learned a lot that will benefit future missions that attempt to dig into the subsurface.”

One phase ends, and another begins…

Last weekend, the mole made a final attempt to dig farther underground on Mars. Even with all the steps we’ve taken to #SaveTheMole, it seems there’s just not enough friction in this soil to keep it moving downward. (1/4) pic.twitter.com/ZevtiAvS36

Like many scientific experiments, though, failure is expected and, in fact, sheds a lot of light for future research.

“This is why we take risks at NASA – we have to push the limits of technology to learn what works and what doesn’t. In that sense, we’ve been successful: We’ve learned a lot that will benefit future missions to Mars and elsewhere, and we thank our German partners from DLR for providing this instrument and for their collaboration,” explained Thomas Zurbuchen, associate administrator for science at NASA.

It’s a sad week for the mole, but NASA has many plans when it comes to Mars, the agency may even be sending robot dogs to roam its dusty soil soon.