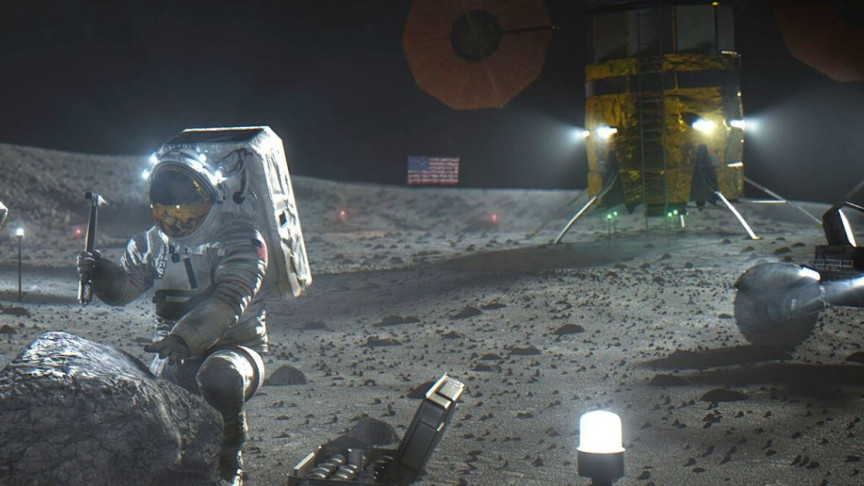 NASA broadcasted the 71st International Astronautic Congress on Monday, where the agency gave critical updates on the Artemis program to build a base of operations on the moon, according to NASA’s “Explore As One” post on its official website — beginning at 12:30 PM EDT, and airing on NASA’s YouTube channel.

Artemis will send astronauts to the moon’s surface in 2024 to establish a sustainable lunar presence before the decade is out, according to a separate blog post on NASA’s website.

RELATED: ARTEMIS I MOON LANDING SCHEDULED FOR 2024, CREWLESS MISSIONS IN 2021

Mike Riley, CEO of AMRO, is a third-gen C-level official of the AMRO company. He introduced one of the window panels for the cone of the Orion crew capsule. The above section is complete and ready to ship out.

An employee at AMRO stressed the company’s policy to use the latest and safest technology to ensure all astronauts come back safe to return to their families.

Another employee showed the engine section core stage barrel panel, in addition to a Launch Vehicle Stage adapter — both of which are waiting for inspection before being sent out to the main craft construction.

Mike Hawes, vice president for human exploration, in addition to the Orion program manager at Lockheed Martin  NASA’s legacy spacecraft manufacturer — introduced the next section of the conference.

A company called AMRO manufacturs the cone panels — or sloped pieces — at the top of the Orion capsule, which are critical components, said Hawes. The first panel was recently completed.

The Artemis II has also seen significant progress. The NASA team recently finished bonding more than 180 tiles for the heat shield — a section at the bottom of the crew module that protects astronauts from the plasma-hot heat of re-entry into Earth’s atmosphere, said Hu.

The European service module — which provides the power and propulsive capability for the Artemis spacecraft. Once that’s ready, NASA will bring their work together for Artemis II.

The first panel of NASA’s Artemis crew module — next to the window — is complete, said Hu during the live stream.

Howard Hu, acting program director of the Orion program opened the IAC. “Orion is NASA’s next-generation spacecraft [for] taking the first woman and the next man to the Lunar surface,” said Hu.

Suppliers from all 50 U.S. states — including Puerto Rico — are contributing to the Orion spacecraft.

The Artemis I spacecraft completed a crucial system-level test to demonstrate Orion’s ability to operate robustly and survive in space earlier this year. It involved simulating the “vacuum” environment of space, said Hu during the live stream.

“We only have a few remaining assembly tasks […] to pull the entire vehicle together, and then shortly after that we will be ready to hand over to our ground processing team and stacking on the space launch system,” added Hu.

NASA scientists don’t want to inadvertently destroy the possibility of performing experiments on local samples for later generations. If proper sanitation measures aren’t taken on the moon or Mars, samples of local minerals or other material could become mixed with human biological matter — like bacteria from Earth — and make it impossible to study other-worldly substances.

On the other hand, NASA astronauts need to take steps to ensure no extraterrestrial biological agent — like a virus — is introduced into the Earth’s ecosystem, since our immune systems could have no immunity to an infectious agent that evolved in a totally different way than humans.

“When we bring things back, we want to be sure that we’re safe. Just like the Apollo astronauts who were put into quarantine,” after returning from their journey to the moon, according to the live stream.

“It’s perfectly appropriate to think of biological research at the surface of the moon both in the context of fundamental science, and also the history of the moon such as geology and the complex chemicals which — without doubt — we will find,” said an official on the live stream.

Scientists are interested in Mars’ history — much of which probably won’t be discovered until humans are physically present, according to the live stream.

Mars is far from Earth — “not just days, it’s months away,” according to the live stream. Learning how to build systems for life support in-situ on the surface of Mars will build robustness to fully support a human presence on the Red Planet.

So, while putting humans on Mars will center scientific research, there’s also an opportunity for humans to learn how to “live off the land,” as it were, far away from the relatively life-friendly atmosphere of Earth.

“We’re really interested in the environment of the moon,” said an official. The “gateway” — a term for the forthcoming moon base and its function between the Earth and the rest of the solar system — will allow scientists to study how the human body is biologically affected during space travel.

As the conference moves forward, NASA will consider the international cooperation behind the agency’s forthcoming lunar plans throughout the entire Artemis program, reports PR Newswire.

Additionally, NASA will give a virtual exhibit to show off the Artemis program, along with information on the International Space Station (ISS), and the agency’s Commercial Crew Program. Visitors to the event will provide a digital mosaic of the space station on social media using #NASAVirtualExhibit.

This is ongoing coverage of NASA’s coverage of the 71st International Astronautical Congress, featuring updates on the Artemis mission to the moon — so be sure to return here for the latest updates.