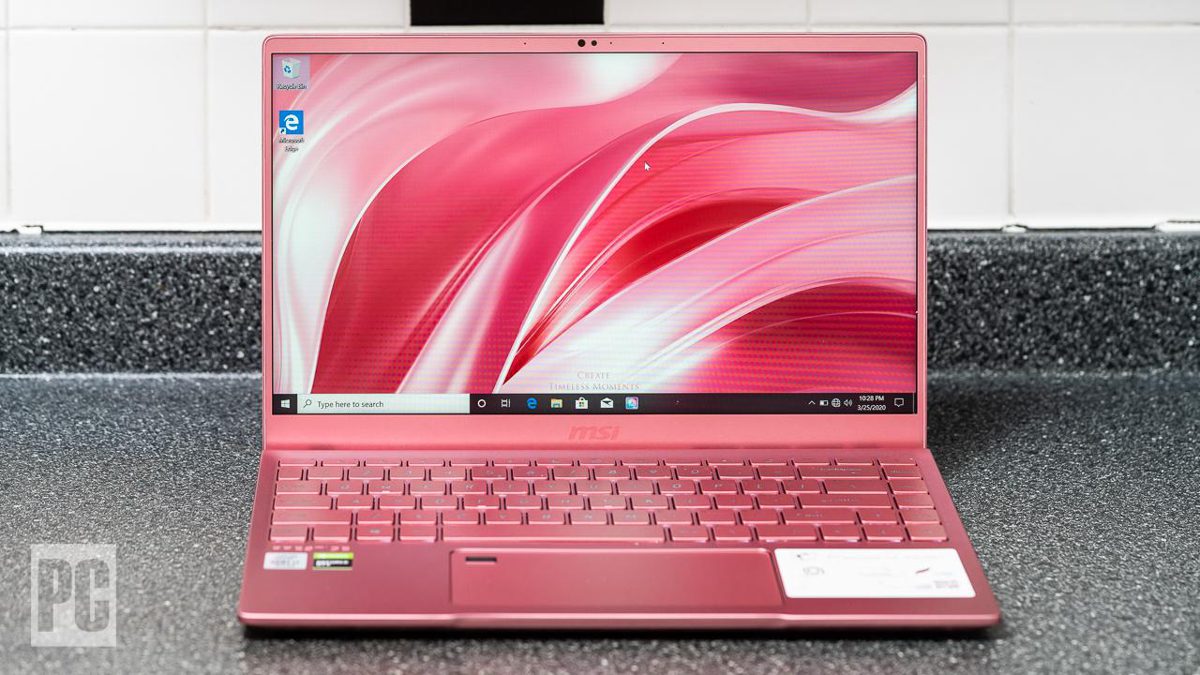 If
you’re comfortable walking a little floofy dog, you’ll be fine appearing in
public with MSI’s Prestige 14 in Rose Pink. This $1,399 ultraportable laptop laughs at boring black and subdued silver shades—it’s a vivid metallic pink, a little
paler than hot, that makes the lid and keyboard deck stand out (and the unit
comes with a carrying case and a mouse to match). The Prestige 14 also
outperforms most competitors, thanks to a six-core Intel Core i7 processor and light-gaming-worthy
Nvidia GeForce GTX 1650 Max-Q graphics. Its steeper price and positioning keep
it from unseating the mainstream Dell Inspiron 14 7000 as our ultraportable Editors’ Choice, but it’s worth a look if you’re
considering high-end compacts like the Dell XPS 13 or Razer Blade Stealth 13. 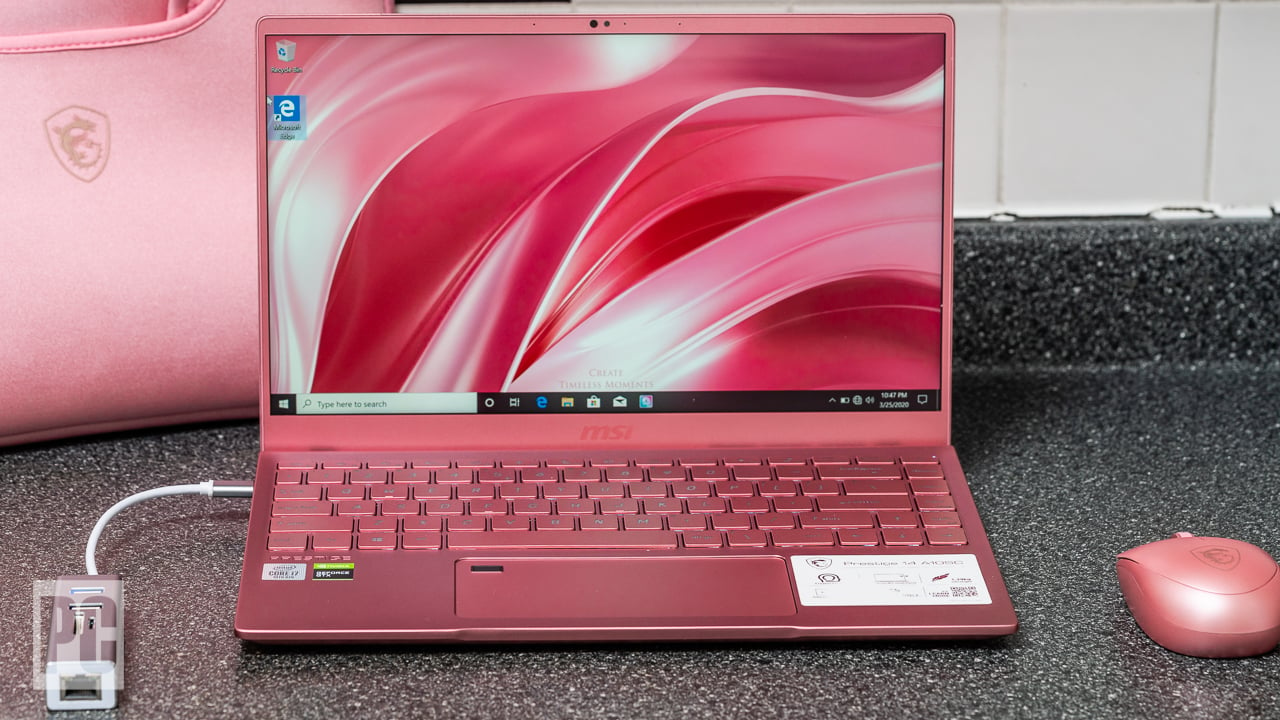 The
bottom bezel stretches around the back of the laptop to prop the keyboard at a
5-degree typing angle when the system’s opened. The MSI has passed MIL-STD 810G
tests against road hazards such as shock, vibration, and temperature extremes;
there’s next to no flex when you grasp the screen corners and only a little
when you mash the keyboard. 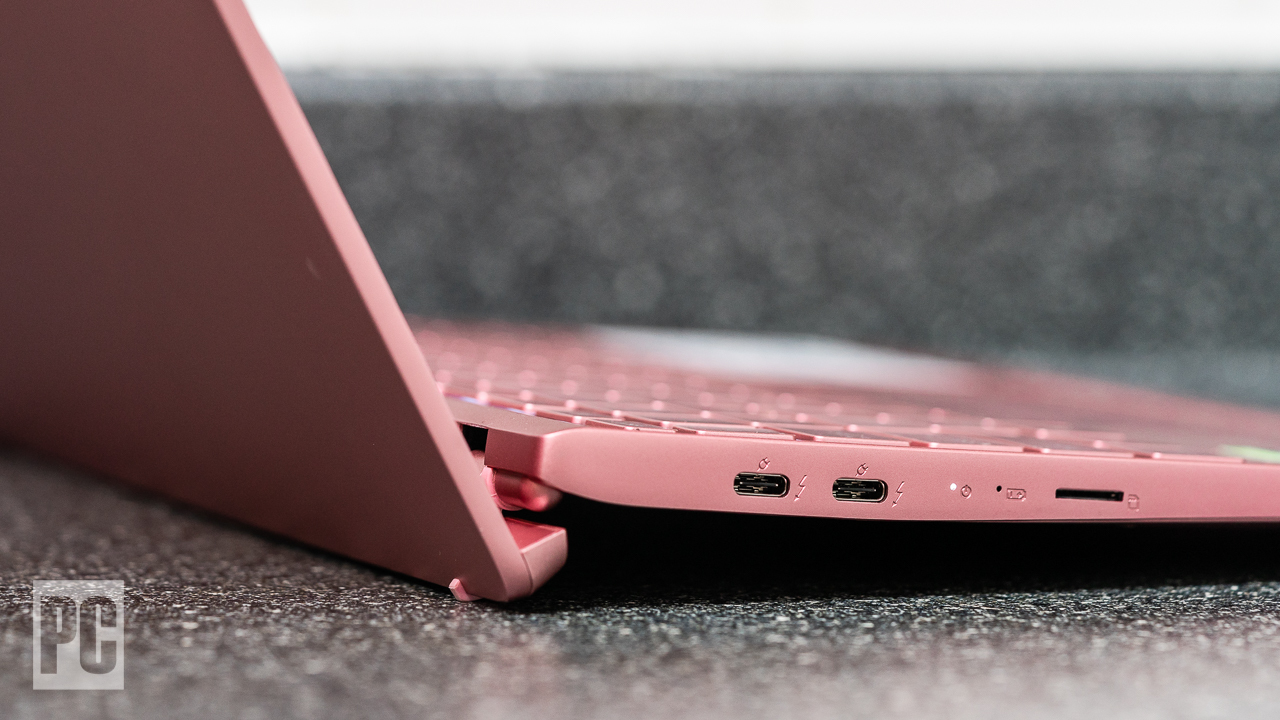 Two antiquated USB 2.0 ports join an audio jack on the laptop’s right side. The
left edge holds two Thunderbolt 3 ports (one accommodates the AC adapter) plus
a microSD card slot. The Prestige 14 has 802.11ax (Wi-Fi 6) and Bluetooth 5.1
wireless and comes with a USB Type-C mini dock (regrettably, not pink) with USB-A and Ethernet ports and a
full-size SD-card slot. 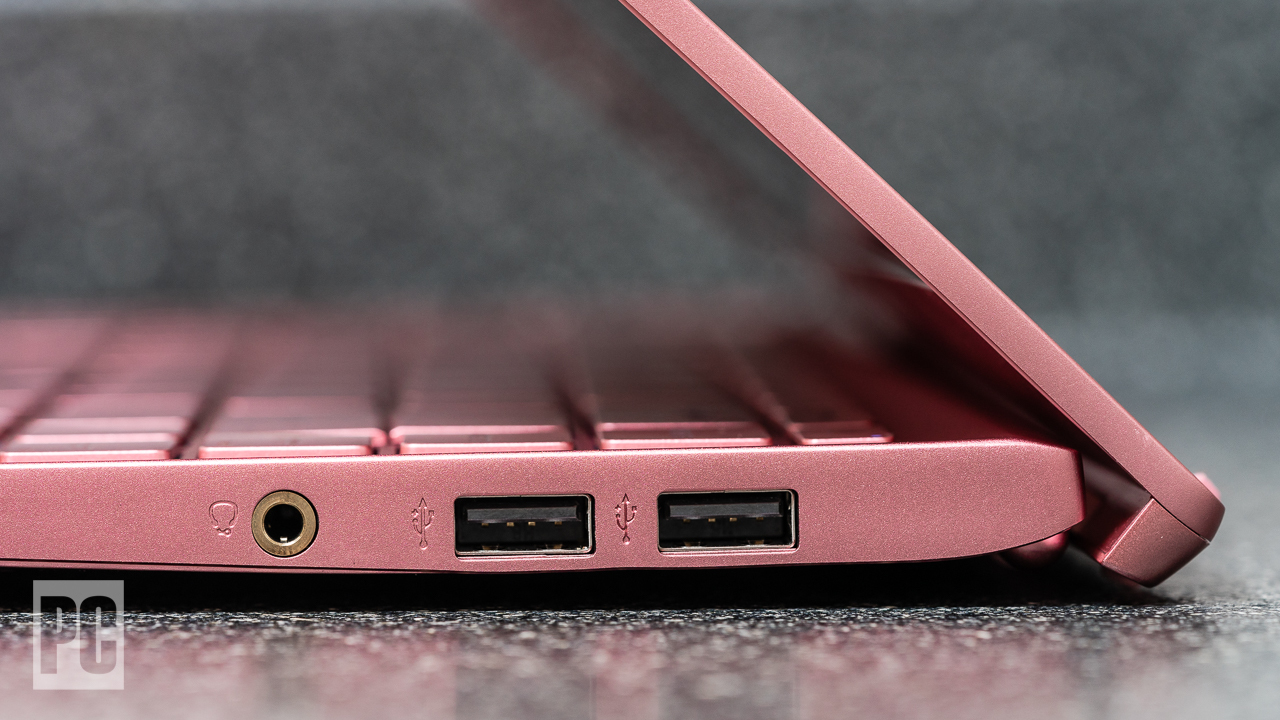 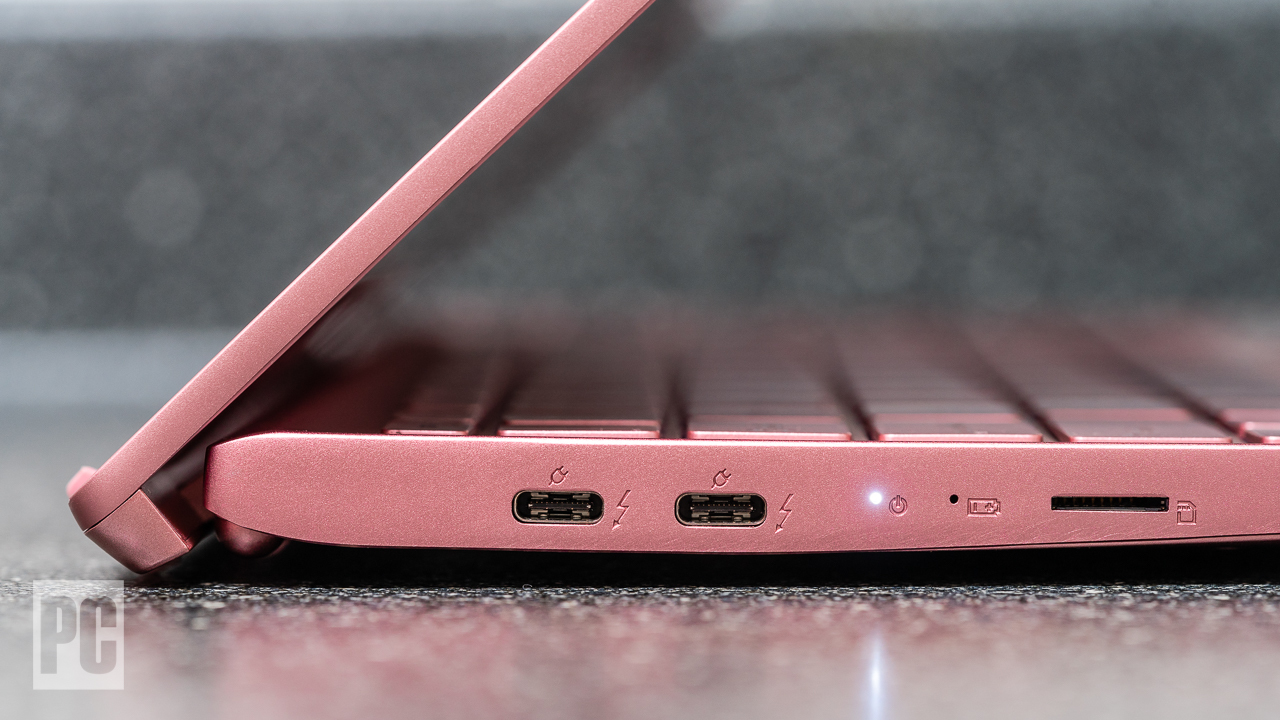 With no HDMI port, you’ll need a USB-C DisplayPort or HDMI
dongle to connect an external monitor. There’s no LTE mobile broadband and,
strangely, no Kensington or other security-cable lockdown slot.

The
720p webcam takes above-average bright, crisp video with just a trace of
noise but accurate colors. It’s toggled with the F6 key; pressing F5 mutes the
microphone if you’re lurking in an online conference. Sound from the
bottom-mounted speakers isn’t extremely loud, but it is decently clear—short on bass, but with ample midtones and highs and free of buzzy distortion. It’s easy to
hear overlapping tracks. 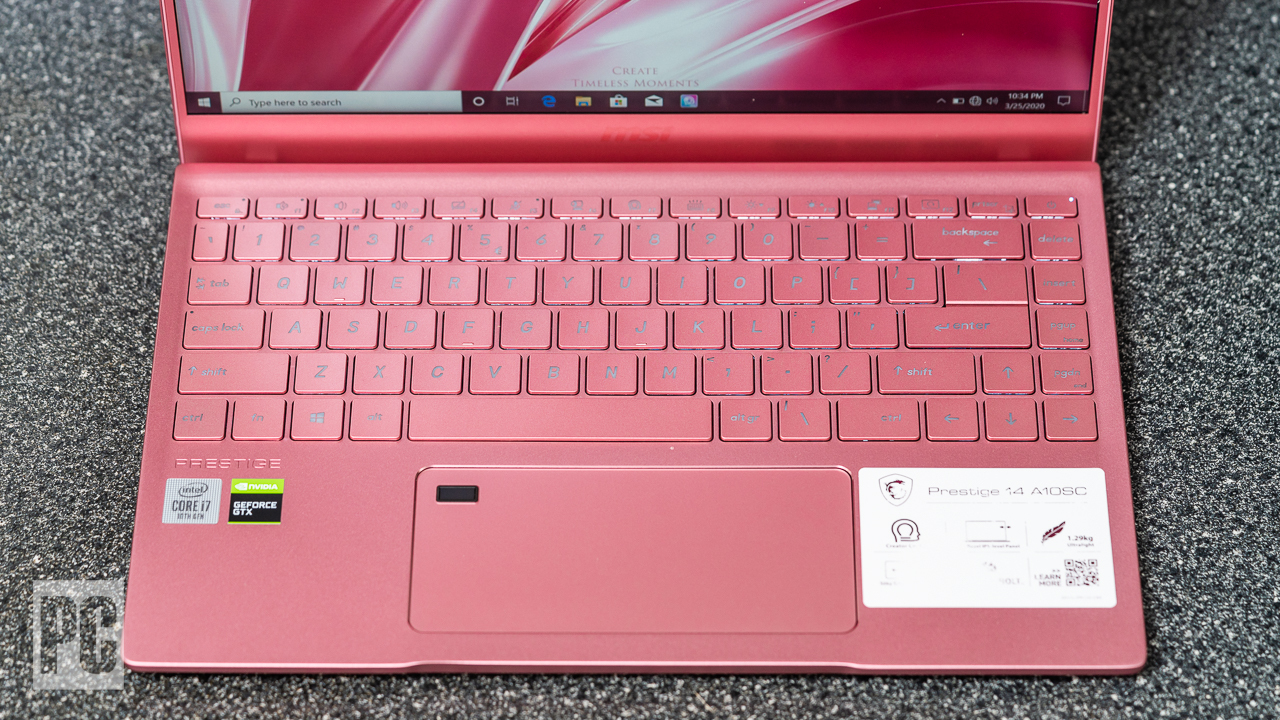 The brightly backlit keyboard features Delete, Insert, Page Up, and Page Down keys
in its rightmost column. (The latter two team with the Fn key for Home and End.) Its typing feel is on the shallow side but pleasantly responsive, with a quiet
tappy noise. 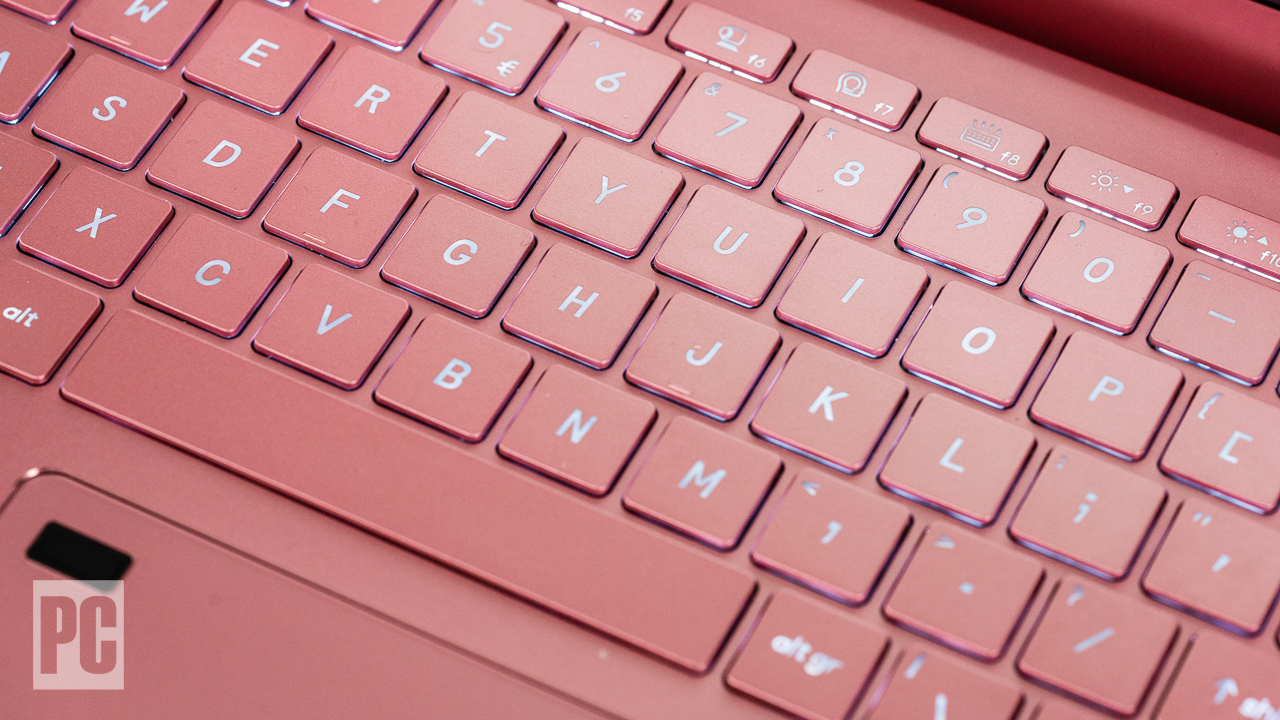 Although the placement is worrisome, accidentally hitting the on/off key at top right thankfully won’t
turn off the computer. The wide, buttonless touchpad has a fingerprint reader
in its top left corner; it glides and taps smoothly, though clicks feel a tad mushy. 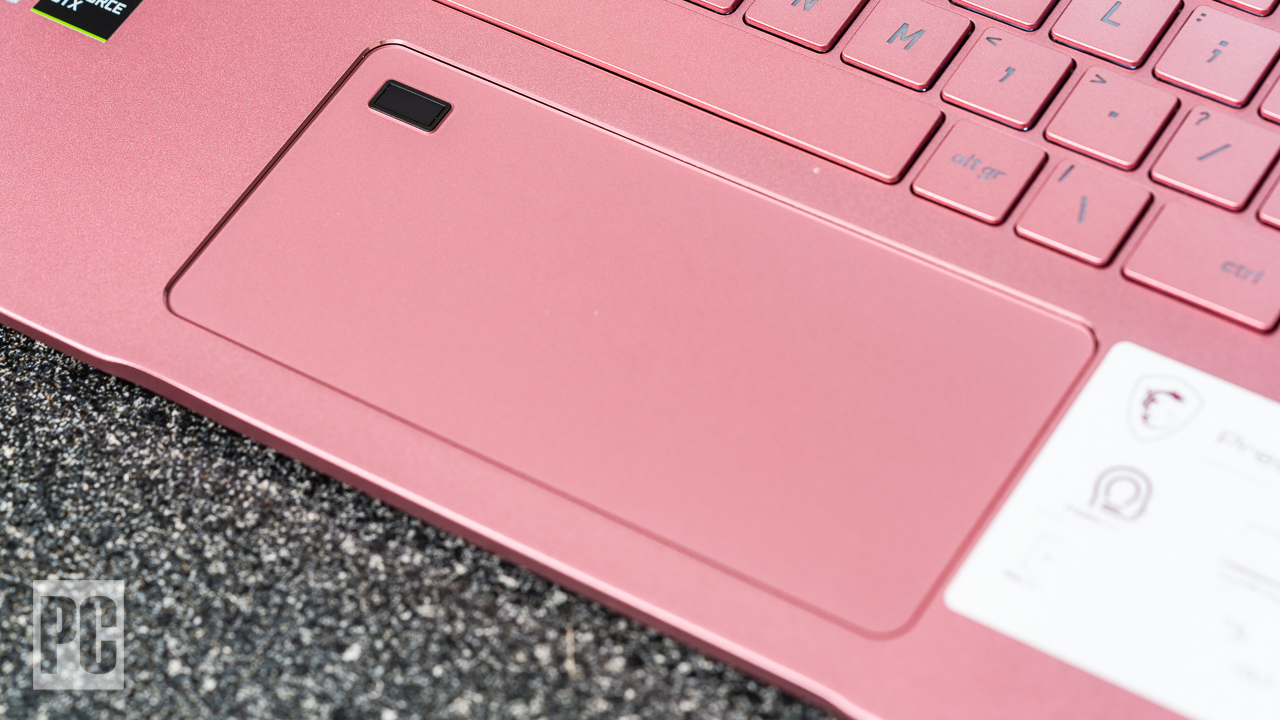 I
could wish the 1080p screen were a little brighter; it’s not really dim, but
white backgrounds are just a touch off-white. Contrast is fair, and fine details
are reasonably sharp; colors don’t pop like poster paints, but they are lively enough
to compete with the pink brushed aluminum. 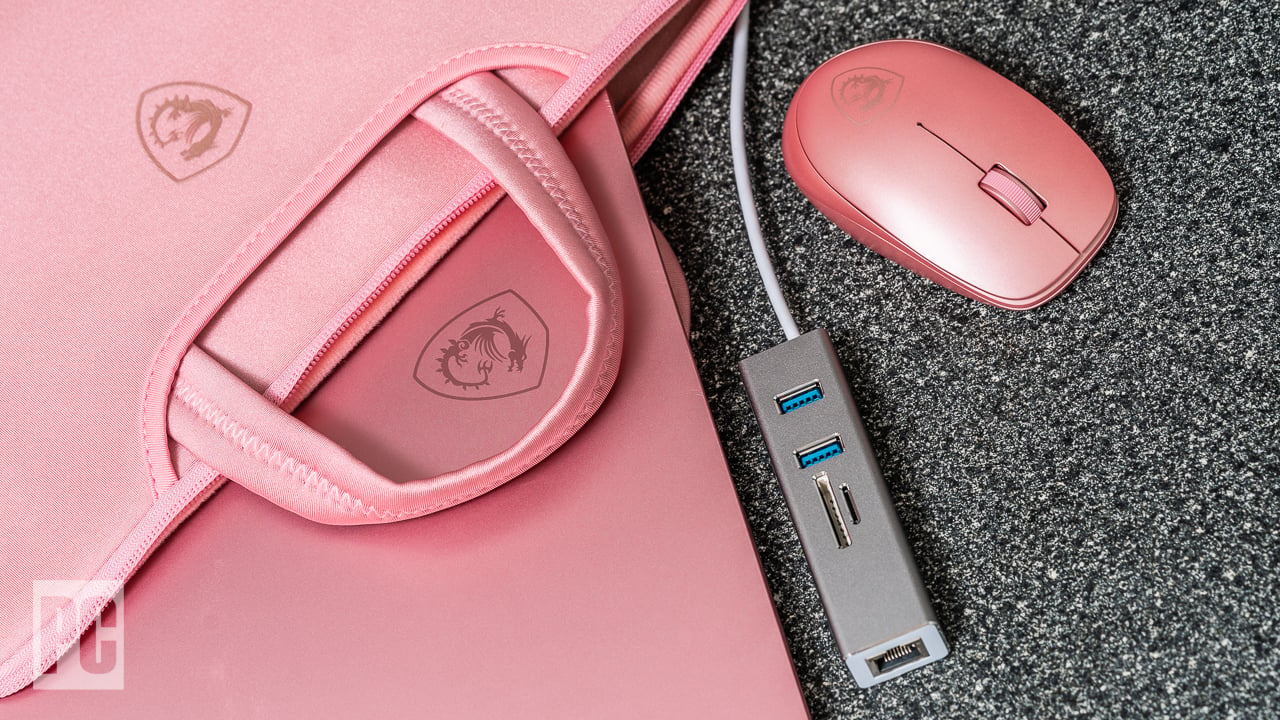 For
our performance benchmark comparison, I pitted the Prestige 14 against four
other ultraportables: two 14-inch models in the Asus ExpertBook B9450 and the Acer Swift 5, and two
elite 13.3-inch machines in the latest Dell XPS 13 and Razer Blade Stealth 13.
The last has the same GeForce GPU as the MSI, but while all have
10th Generation Core i7 chips, only the Prestige has six CPU cores instead of
four, making it the favorite to win our processing benchmarks. 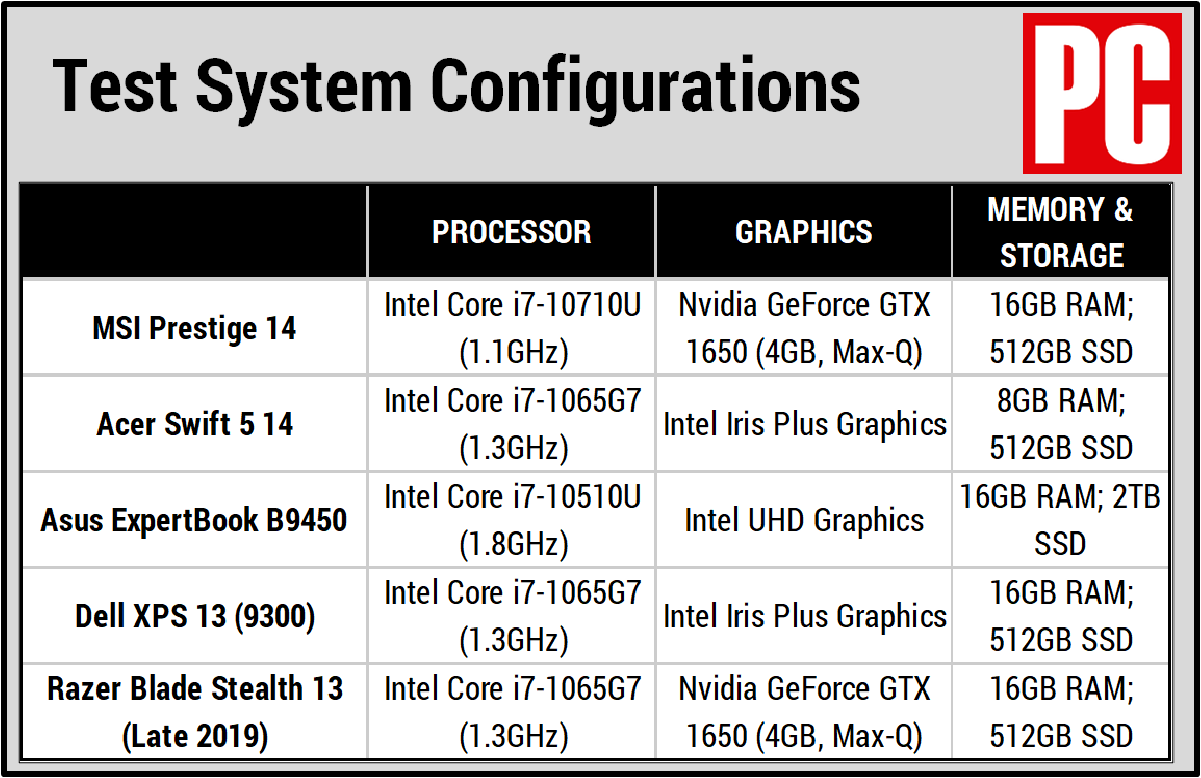 Except for our battery rundown (where I used the Balanced profile), I used Creator
Center’s High Performance profile, which freed the MSI’s cooling fans to make
noticeable noise. The system stayed quiet during everyday usage with less
strenuous apps. (See how we test laptops.)

PCMark
10 and 8 are holistic performance suites developed by the PC benchmark
specialists at UL (formerly Futuremark). The PCMark 10 test we run simulates
different real-world productivity and content-creation workflows. We use it to
assess overall system performance for office-centric tasks such as word
processing, spreadsheeting, Web browsing, and videoconferencing. PCMark 8,
meanwhile, has a storage subtest that we use to assess the speed of the system’s
boot drive. Both yield a proprietary numeric score; higher numbers are better. 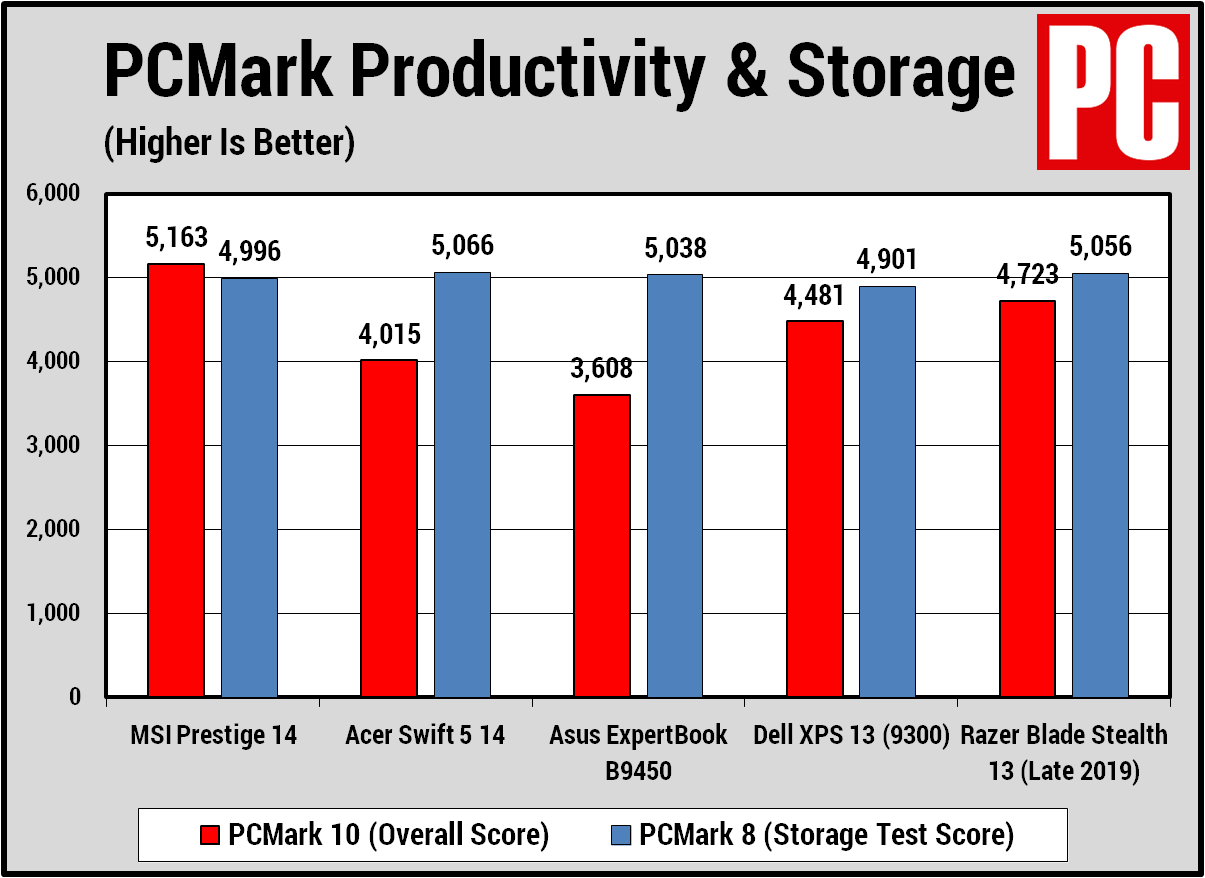 All but the ExpertBook cracked the 4,000-point barrier that indicates excellent
productivity performance, while the Prestige went further with over 5,100
points. The likes of Word, Excel, and PowerPoint hold no terrors for these PCs,
and their speedy SSDs shrugged off PCMark 8’s storage exercise.

Next
is Maxon’s CPU-crunching Cinebench R15 test, which is fully threaded to make
use of all available processor cores and threads. Cinebench stresses the CPU
rather than the GPU to render a complex image. The result is a proprietary
score indicating a PC’s suitability for processor-intensive workloads. 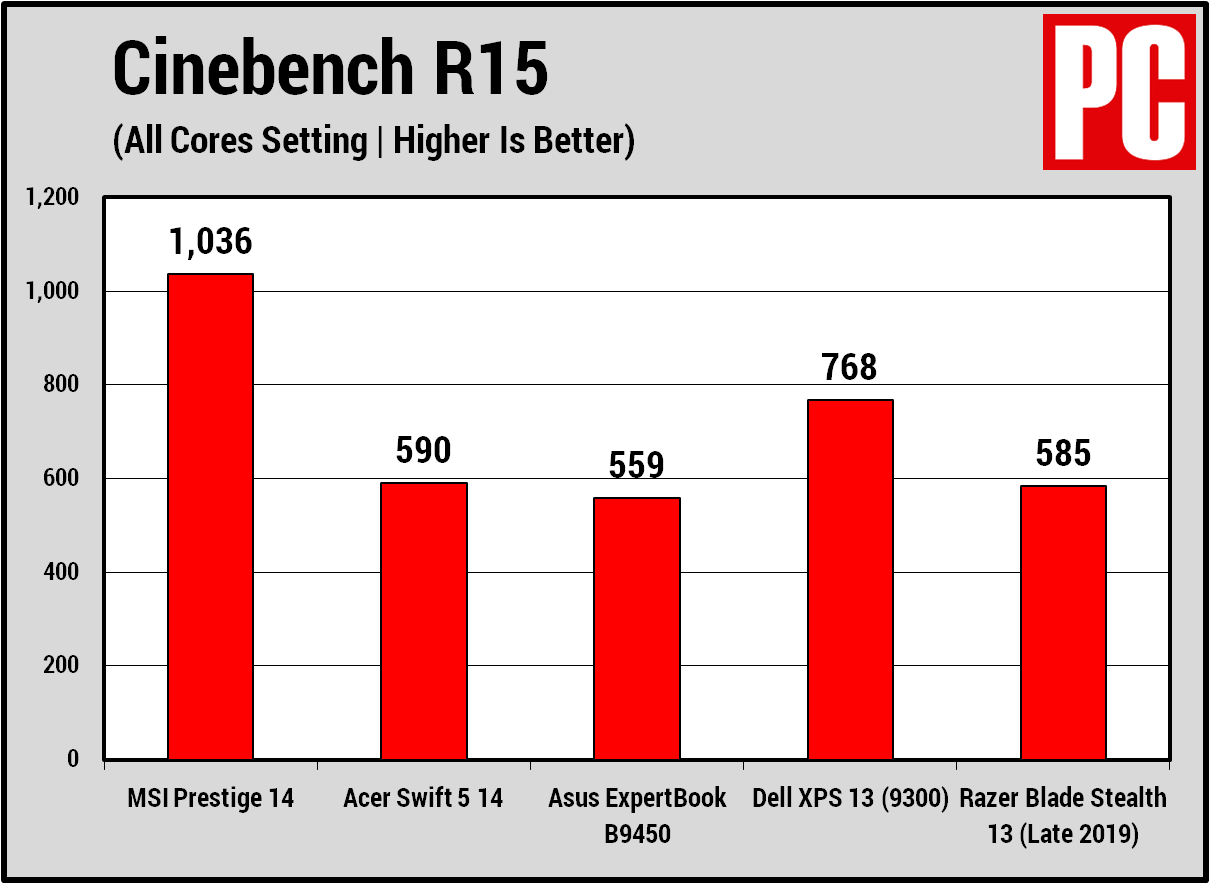 The six-core MSI easily beat its quad-core competition, with the XPS 13 breaking
out of the pack to claim second place.

In
our Handbrake video editing benchmark, we put a stopwatch on systems as they
transcode a brief movie from 4K resolution down to 1080p. It, too, is a tough
test for multi-core, multi-threaded CPUs; lower times are better. 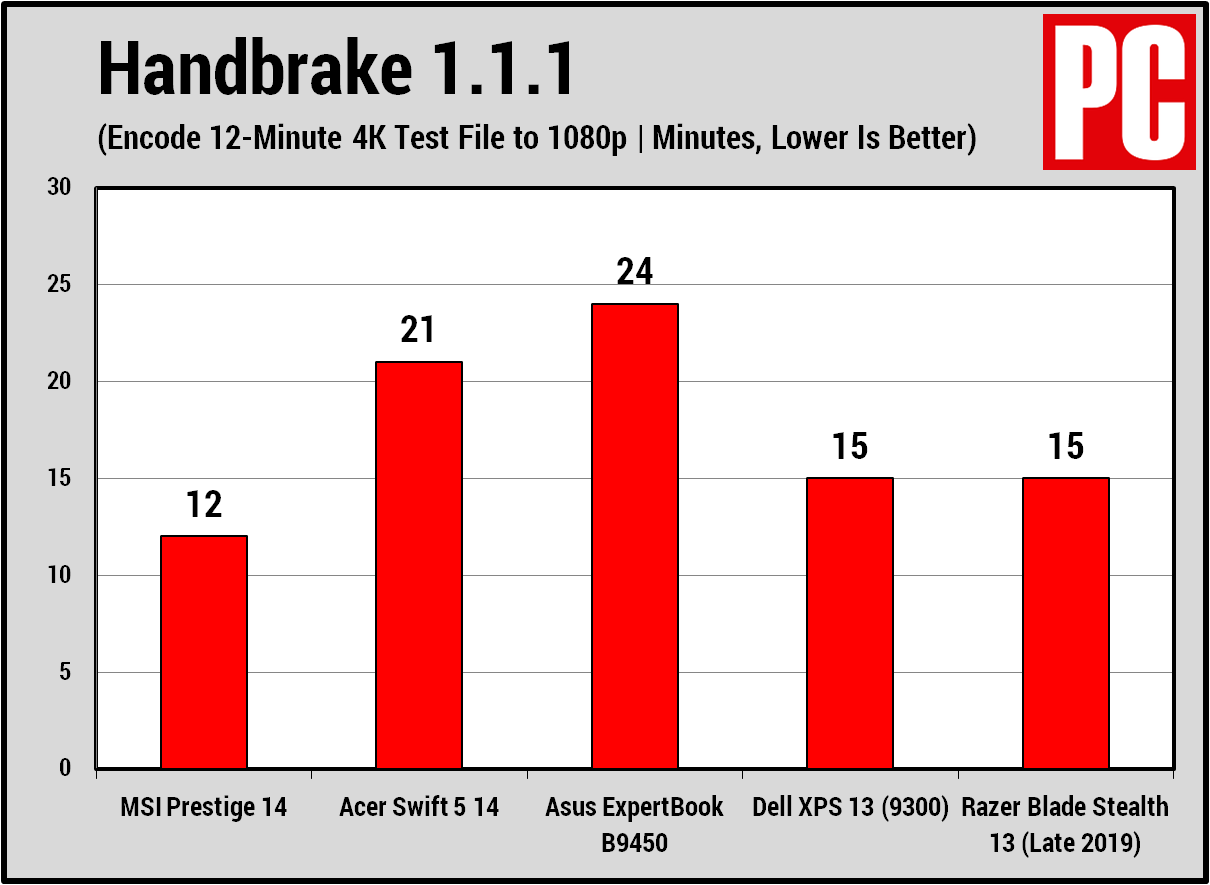 The Dell and Razer did well, but the MSI scored another gold medal. The Asus
cemented its place as the backmarker of the group.

We
also run a custom Adobe Photoshop image-editing benchmark. Using an early 2018
release of the Creative Cloud version of Photoshop, we apply a series of 10
complex filters and effects to a standard JPEG test image. We time each
operation and add up the total (lower times are better). The Photoshop test
stresses the CPU, storage subsystem, and RAM, but it can also take advantage of
most GPUs to speed up the process of applying filters. 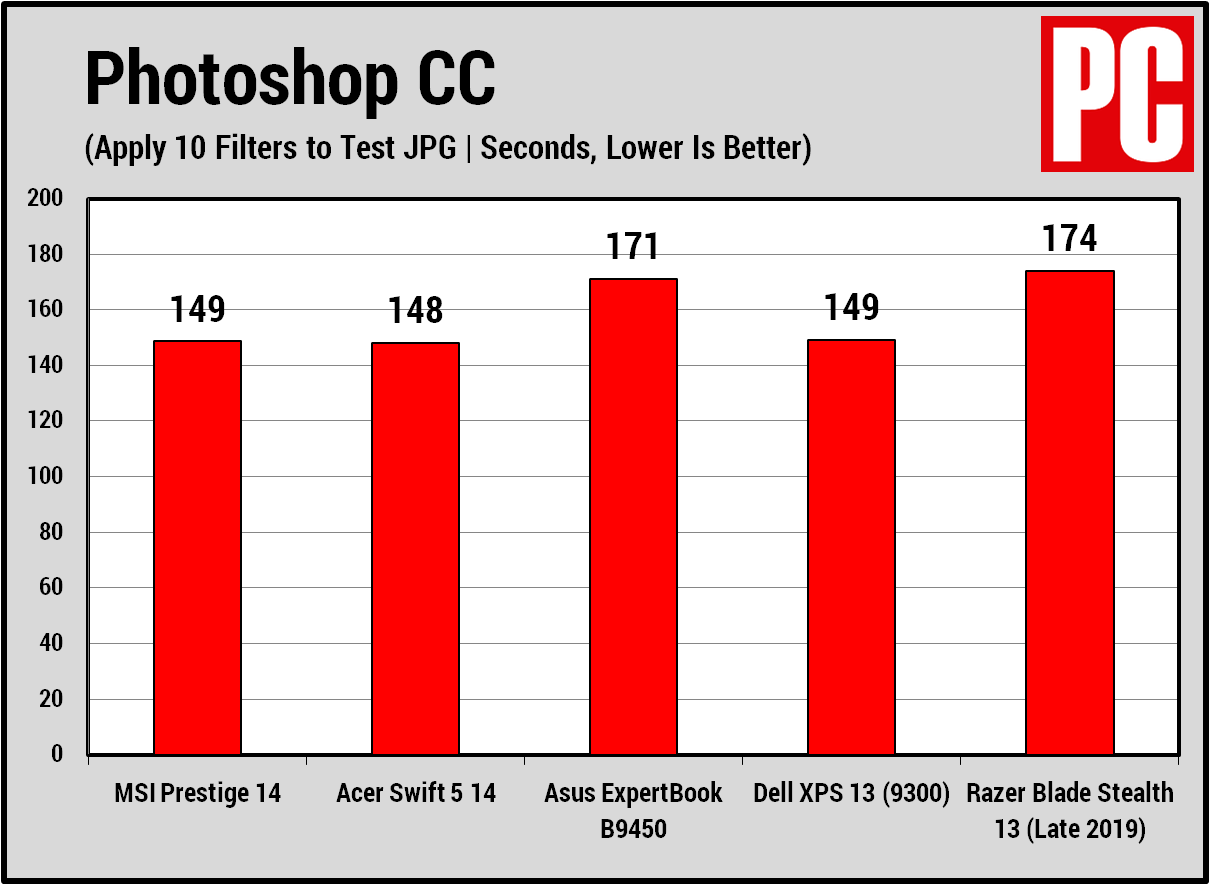 A three-way tie for the win here, with the Stealth taking an uncharacteristic
last place.

The
Razer unfortunately balked at our 3DMark benchmark, which measures relative
graphics muscle by rendering sequences of highly detailed, gaming-style 3D
graphics that emphasize particles and lighting. We run two different 3DMark
subtests; both are DirectX 11 benchmarks, but Sky Diver is more suited to
laptops and midrange PCs, while Fire Strike is more demanding and lets high-end
PCs and gaming rigs strut their stuff. 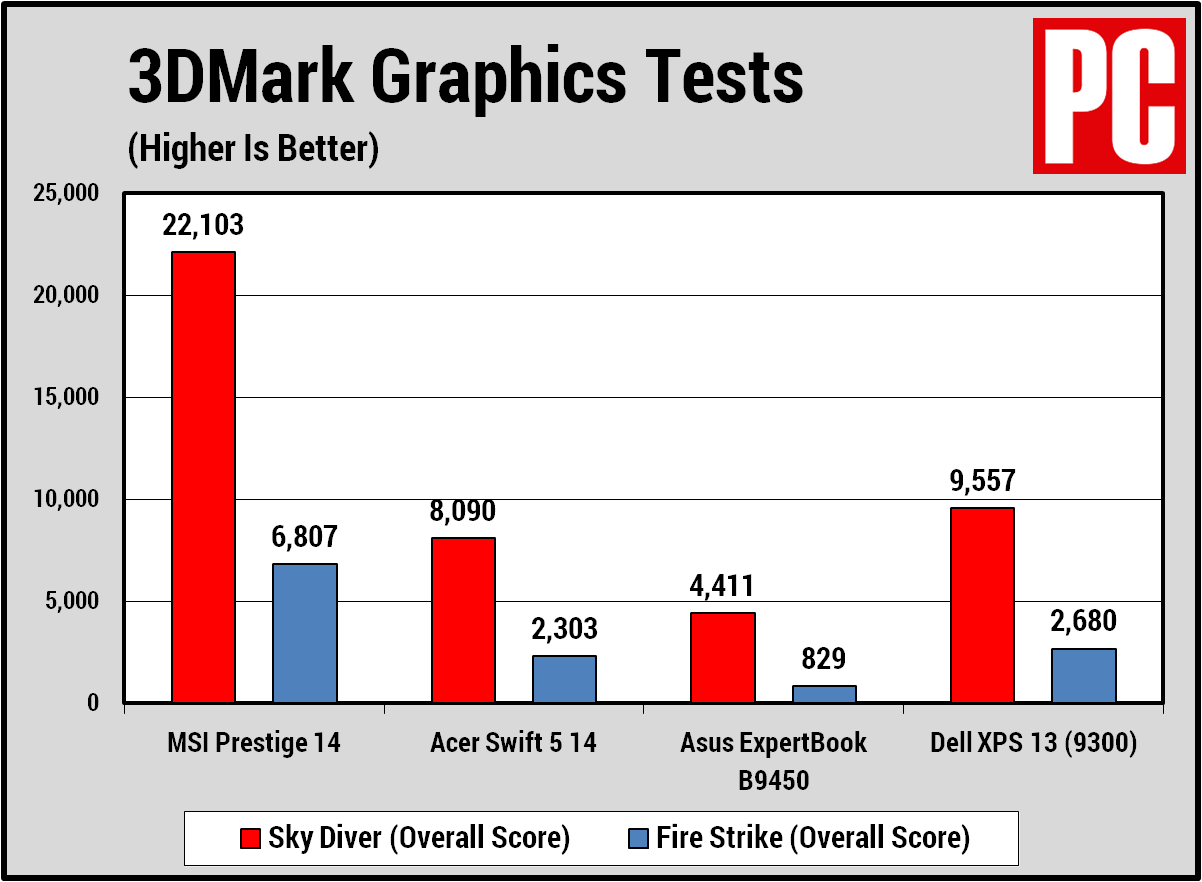 The Razer’s absence let the MSI model dominate this bunch. A full-bore gaming GPU would easily top the MSI’s Max-Q GTX 1650, but the
integrated graphics of the Acer, Asus, and Dell posed no threat to it.

Next
up is another synthetic graphics test, this time from Unigine Corp. Like
3DMark, the Superposition test renders and pans through a detailed 3D scene,
this one rendered in the eponymous Unigine engine for a second opinion on the machine’s
graphical prowess. We present two Superposition results, run at the 720p Low
and 1080p High presets and reported in frames per second (fps), indicating how
smooth the scene looks in motion. For lower-end systems, maintaining at least
30fps is the realistic target, while more powerful computers should ideally
attain at least 60fps at the test resolution. 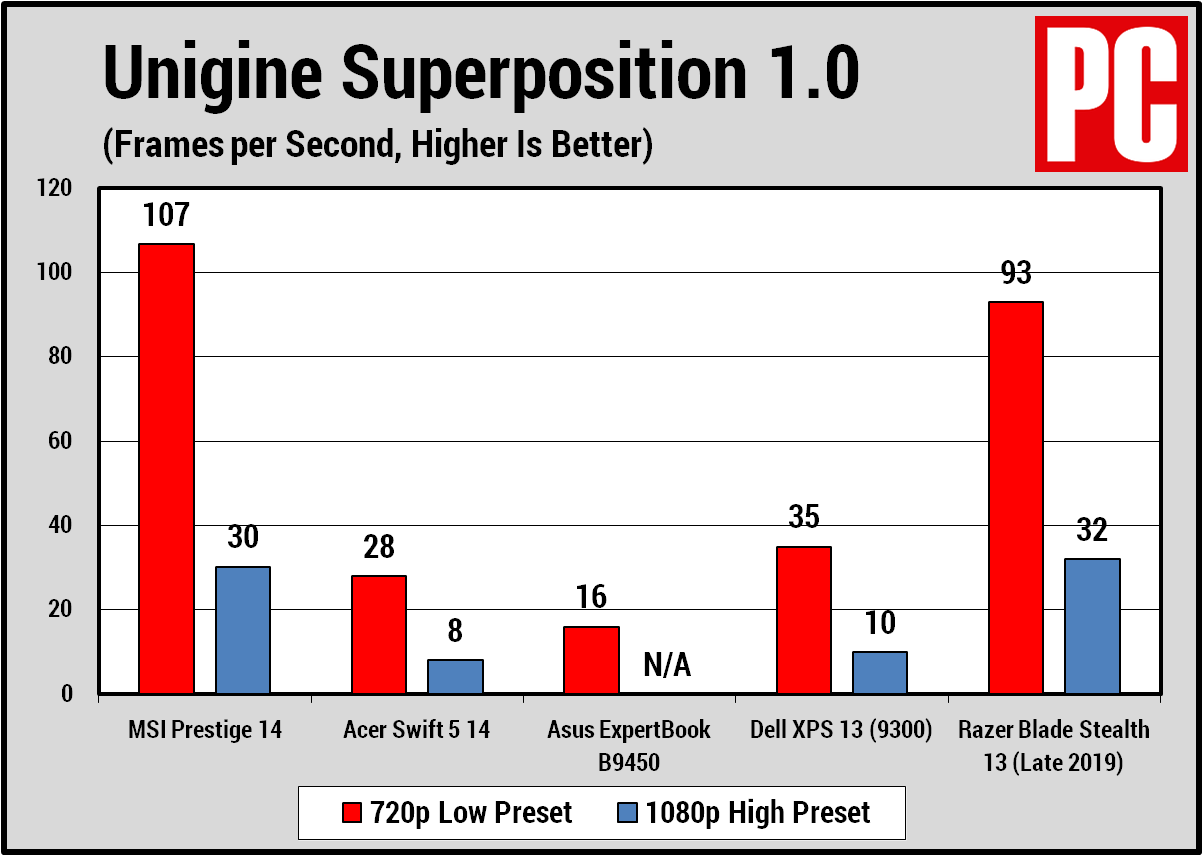 The Prestige 14 slugged it out with the Stealth in this event, but showed again
it’s more suited to light than hardcore gaming. When I sampled the DirectX 12
game Rise of the Tomb Raider at 1080p resolution and its best (Very High) image
quality preset, I didn’t expect the system to reach the 60fps required to
satisfy serious gamers, but was hoping it would do better than its barely
playable result of 34.4fps.

After
fully recharging the laptop, we set up the machine in power-save mode (as
opposed to balanced or high-performance mode) where available and make a few
other battery-conserving tweaks in preparation for our unplugged video rundown
test. (We also turn Wi-Fi off, putting the laptop into airplane mode.) In this
test, we loop a video—a locally stored 720p file of the Blender Foundation
short film Tears of Steel—with screen brightness
set at 50 percent and volume at 100 percent until the system quits. 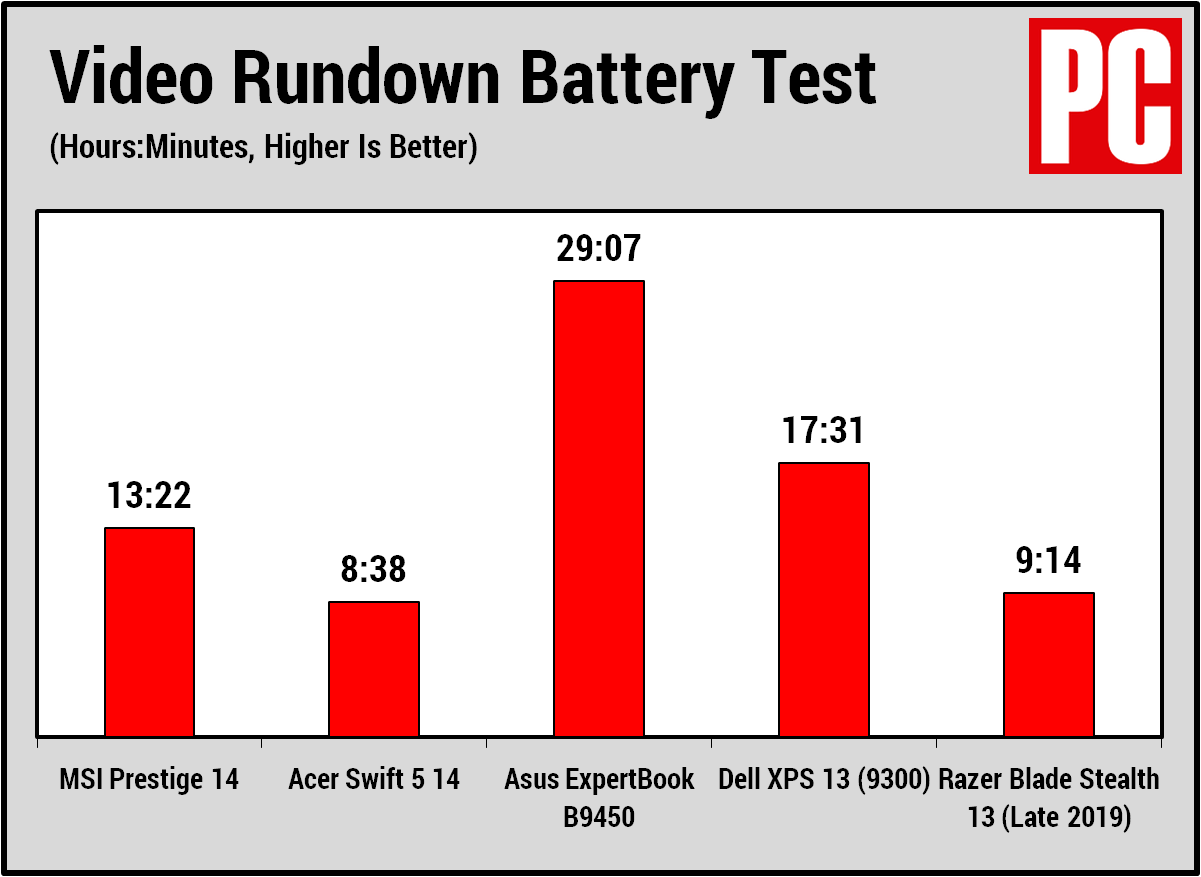 The MSI finished in the middle of the pack with a very respectable 13 and a third
hours of stamina, but the Asus blew the others away with an astonishing 29
hours. Getting through a workday is no problem for most of these machines.

I
suspect the MSI Prestige 14 of throttling back a bit for cooling’s sake,
because its performance and gaming scores are half a step shy of the recently
tested Prestige 15, which has the same CPU and GPU in a more spacious chassis.
But it’s still faster than most ultraportables, as well as offering a handsome,
compact design. 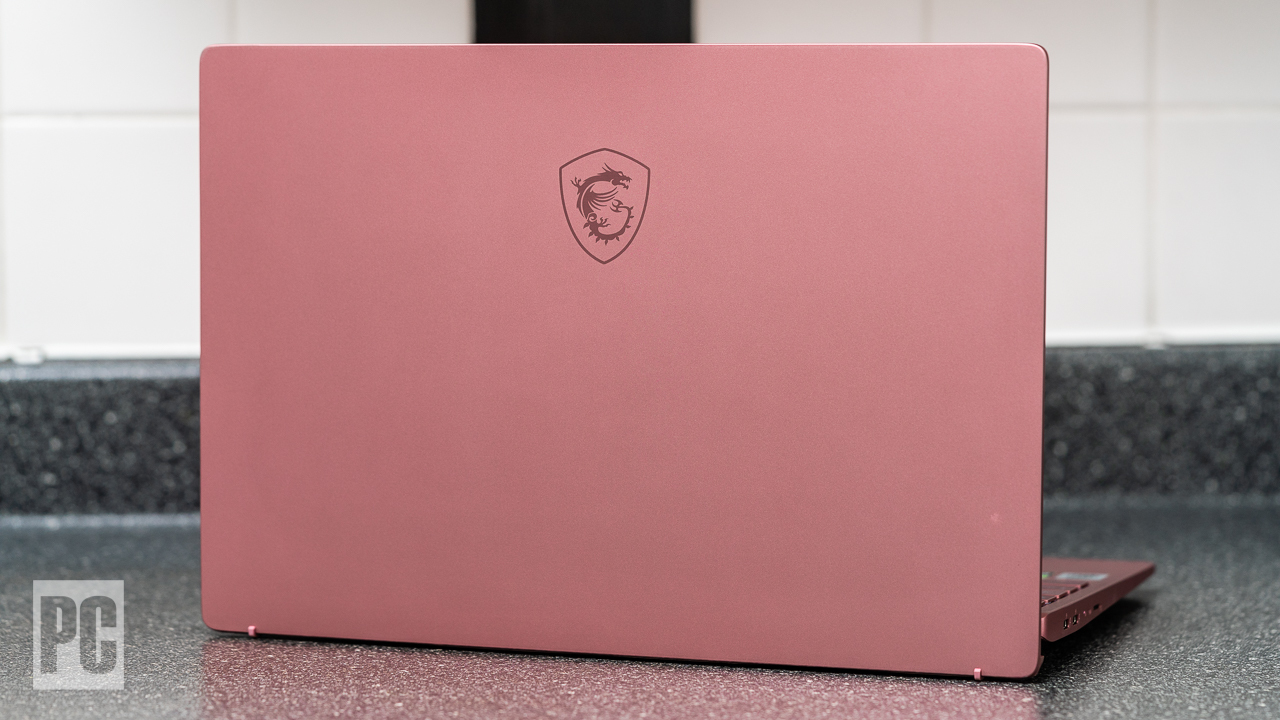 I can grumble about its lack of an HDMI port and last notch worth of screen
brightness, but I appreciate its fitting a 14-inch display into a chassis
barely bigger than many 13.3-inch laptops, and since I haven’t found an
eight-core ultraportable yet its six cores will more than suffice. The Prestige
14 is fairly priced and deserves a spot on your shopping list. 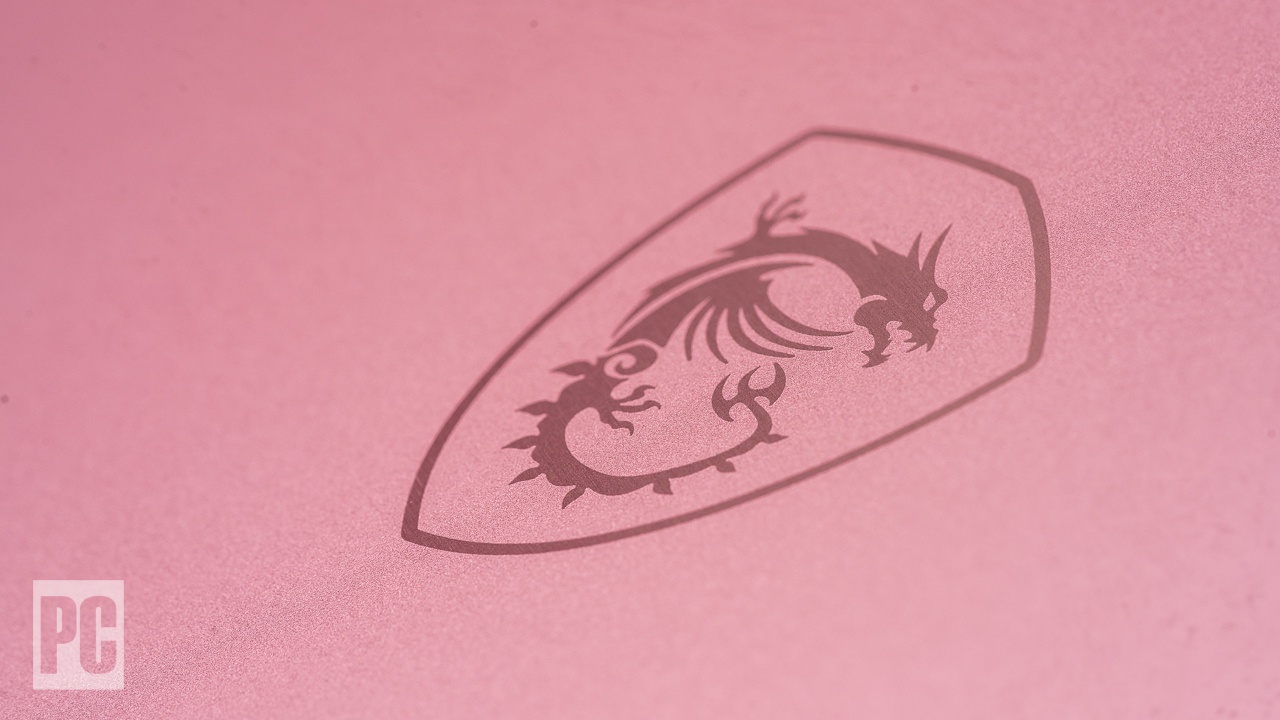