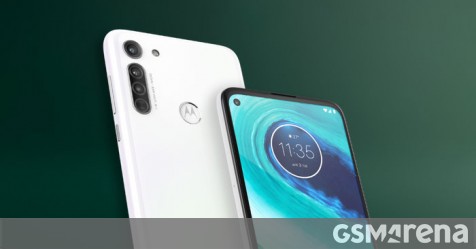 The Moto G8 family just gained another member  and its the Moto G8 that arrives fashionably late to the gathering. Following the launch of the Play, Plus and Power we finally get the vanilla model. Last year, the G7 struck a fine balance between cost and capabilities, but the 2020 successor alters the formula significantly.

The 6.4 display with 720p+ resolution marks a noticeable drop in pixel density (the G7 had a 6.2 1080p+ display). The selfie camera still has an 8MP sensor (1.12µm pixels), but its now inside a punch hole instead of a teardrop notch.

The fourth module is a Laser AF system. The main camera can record 4K video at 30fps, same as before. For comparison, the G7 had a 12MP main cam and 5MP depth sensor, the G8 Plus has a 48MP main and 16MP ultrawide cameras (plus a 1080p+ screen).

The Motorola Moto G8 features a better chipset too, a Snapdragon 665 (also seen in the G8 Plus). The Adreno 600-class GPU is nearly twice as fast as the 500-class GPU on the old model, the CPU is slightly faster too.

The memory configuration is the same as last year, 4GB of RAM and 64GB storage (51GB user available). This is a dual SIM phone, but you can put a microSD card instead instead of a second SIM.

Charging is done over the USB-C port on the bottom, theres also a 3.5mm headphone jack on top. Bluetooth 5.0 is available if you want to listen to music wirelessly. As usual, the Motorola logo on the back of the phone doubles as a fingerprint reader.

The Moto G8 is currently available in Brazil for BRL 1,143 (12% off the MSRP of BRL 1,300). In the UK, the phone will retail for £180 with Amazon, Argos and John Lewis selling it. According to Motorola, the G8 will be expand to the rest of Latin America, Europe, Asia and Australia.

Source (in Portuguese) | Via