Most Popular Work-from-Home Spots in the World: Jakarta, New York City, and London 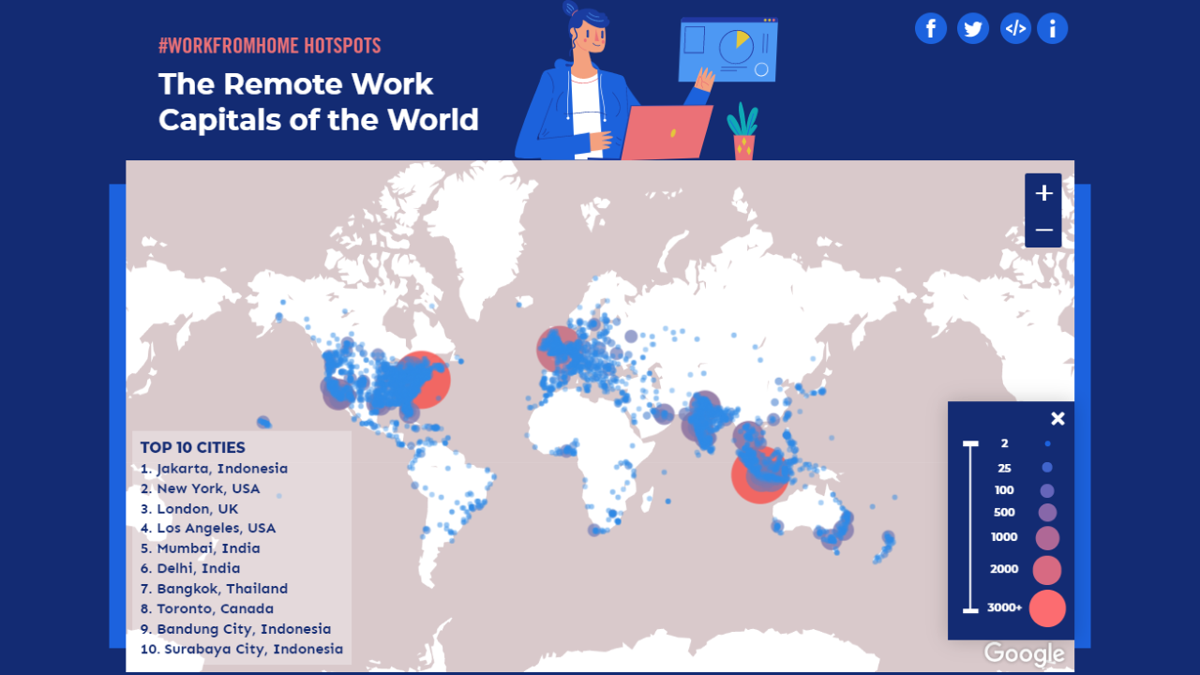 Social influencing on Instagram is so important that we can use it to measure the pure popularity of any concept. That’s the premise behind some research by Headway Capital, a company that does small-business loans: It measured how often the #WorkFromHome hashtag was used over a certain period of time, used the geotags on the hashtags to ID locations, and created a map of the places where WFH is most considered GOAT.

In fact, here’s an interactive version of the map above that lets you zoom in and out. Click Explore to get started.

The data set used for this study was 533,046 Instagram posts made between March 20 and April 4, 2020—the height of the initial coronavirus quarantine in the United States and many other places. Of those posts, 112,865 of them were tagged with a location, which was used to assign a country, city/state, or region.

The top three cities with mentions of #WorkFromHome are clear. Jakarta, Indonesia is the big winner, with 4,783 mentions. (The country had been hit pretty heard by COVID-19 early on, and the president there said in March that everyone who could work from home should do so.) New York City was second, with 3,052. And London, England was third, at 2,289.

The top US cities, in order of most-to-least mentions, were New York, Los Angeles, Chicago, Houston, Atlanta, Miami, San Francisco, San Diego, Austin, and Dallas. But the top state was California at 7,201, to New York state’s 4,181.

Headway also looked at some of the other hashtags used alongside #WorkFromHome and found several of them were COVID-19-related: #stayhome had 78,097, #socialdistancing had 47,275, and #quarantine was mentioned 44,307 times.

You can read the full report at Headway Capital, and check out its infographic below with work-from-home productivity tips.