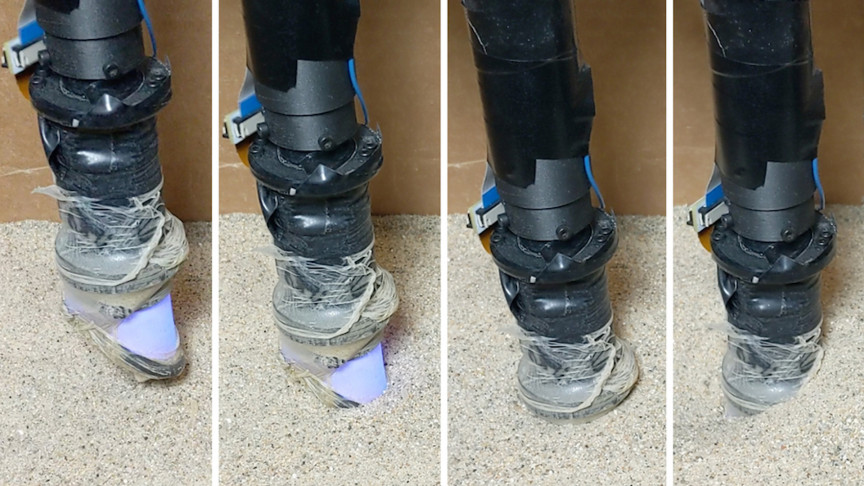 Roboticists from MIT developed a robotic digger finger that burrows below surfaces and senses its surroundings, somewhat like a mole. Their new design is detailed in a paper published in open-access archive arXiv.

MIT’s Digger Finger was designed to discern the shape of objects buried in granular material such as sand and pebbles. In order to do that, they had to develop a robotic hand with slender fingers that could vibrate to dislodge compact sand grains.

“The idea is to make a finger that has a good sense of touch and can distinguish between the various things it’s feeling,” study author Edward Adelson explained in a press statement. “That would be helpful if you’re trying to find and disable buried bombs, for example.”

GelSight consists of a clear gel covered with a reflective membrane and a set of LED lights. The light rays from the LEDs distort as the gel becomes deformed when it comes into contact with objects. The distorted light, in turn, is analyzed by a machine learning algorithm that discerns the 3D shape of the object causing this deformation.

For the new Digger Finger system, the MIT team tweaked that system to make it look somewhat like the hose of a vacuum cleaner — a thin cylindrical design enables it to penetrate the granular material, and two of the three LEDs are replaced with colored fluorescent paint to save space.

The team behind the Digger Finger believes its new development could be used for more accurate subsurface sensing. Typically, researchers would use methods such as Ground Penetrating Radar or ultrasonic vibrations. While these allow for a longer sensory range, these technologies sometimes fail to differentiate different types of materials, such as rocks and bones, for example.

Improving the fields of robotics and artificial touch

The Digger Finger technology joins a whole host of new robotic hand innovations presented over the last few years. The field of soft robotics, in particular, is developing robot hands with an unprecedented capability to hold and sense delicate objects without breaking them.

In 2019, researchers at Harvard’s Wyss Institute for Biologically Inspired Engineering, and Baruch College at CUNY, developed a soft robot gripper capable of holding a jellyfish, which is made of 95 percent water, without damaging the creature. Similarly, OpenAI presented a dexterous human-like robotic hand in 2019 with the capacity to solve a Rubik’s Cube using reinforcement learning.

With MIT’s Digger Finger, the team envisions robotic hands eventually becoming as dexterous as their human equivalent and taking on delicate tasks that would currently only be reserved for human beings specializing in a field, such as a surgeon.

The researchers stated that in the nearer term, the Digger Finger could be used to search for buried bombs or cables in dangerous locations.

Ultimately, the MIT team’s latest work will help to improve the technology of artificial touch, and the team will continue to develop the robotic hand’s ability to accurately focus on specific objects and cancel out unnecessary noise from the subsurface.