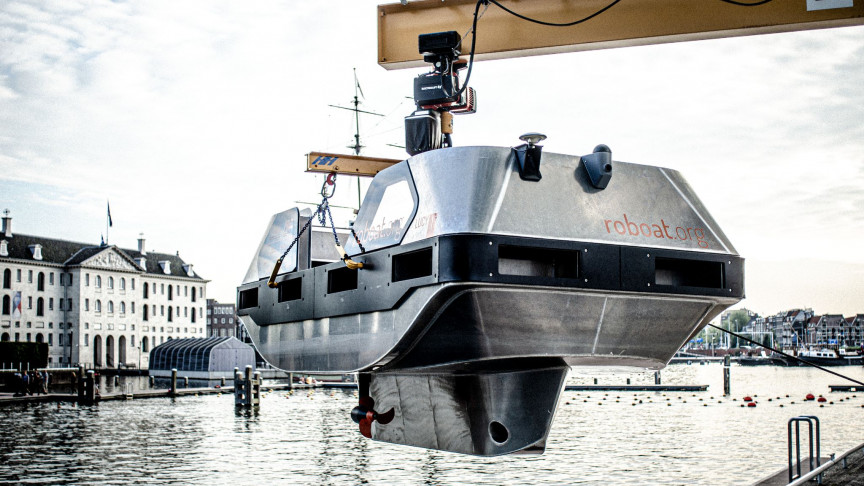 We’ve heard a lot about self-driving vehicles in recent months, though not as much about self-navigating ones. In order to correct the course, so to speak, scientists from MIT CSAIL joined forces with researchers at the Senseable City Laboratory and the Amsterdam Institute for Advanced Metropolitan Solutions (AMS Institute) in the Netherlands to create a full-scale, autonomous robotic boat.

A fleet of the imaginatively-named Roboat is being set loose on the canals of Amsterdam today, October 28, allowing passengers to travel the waters without the need for a captain, a press statement reveals.

The Roboat is the result of six years of development time, during which time MIT has tested several iterations of its self-navigating boat — the latest is called the Roboat III. The finalized version will be capable of carrying up to five passengers, or 3,306 lb (1,500 kg) of cargo, meaning it can deliver goods and transport waste. It is fully electric, has 10 hours of battery life, and can be charged wirelessly.

When the robotic boat gets near to a port or riverbank, it goes into close proximity approach mode, making it easier to dock. The MIT CSAIL team says the sensors and technology featured in Roboat are similar to those used in self-driving cars. The self-navigating vessel uses LIDAR sensors as well as several cameras, allowing for 360-degree vision and crash detection. The Roboat is designed to be fully autonomous, though an onshore operator will make sure that everything is going smoothly from a control center.

“As Roboat can perform its tasks 24/7, and without a skipper on board, it adds great value for a city,” Fabio Duarte, a lead scientist on the project explained. “However, for safety reasons it is questionable if reaching level A autonomy is desirable. Just like a bridge keeper, an onshore operator will monitor Roboat remotely from a control center. One operator can monitor over 50 Roboat units, ensuring smooth operations.”

Amsterdam is a perfect testing ground for AI vessels

The Roboat maximizes seating space with two benches facing each other as no space is needed for a boat wheel or a till. As can be seen in the image and the video (above), Roboat’s creators went for a futuristic gray look. As AMS Institute Director of Innovation Stephan van Dijk puts it, “the historic center of Amsterdam is the perfect place to start, with its capillary network of canals suffering from contemporary challenges, such as mobility and logistics.”

Not only is Amsterdam a good testing ground for autonomous navigation, so are the relatively small vessels that are being unveiled in Amsterdam. Just last month, Orca AI announced that it is trialing a new safety system with a view to eventually enabling massive autonomous cargo ships. If the Suez Canal incident earlier this year taught us anything, it’s that a small malfunction, be it by a human or an AI, could have a knock-on effect that costs the global economy billions of dollars on a daily basis.