Minecraft Dungeons Is Here, But What Is Minecraft Without Building? 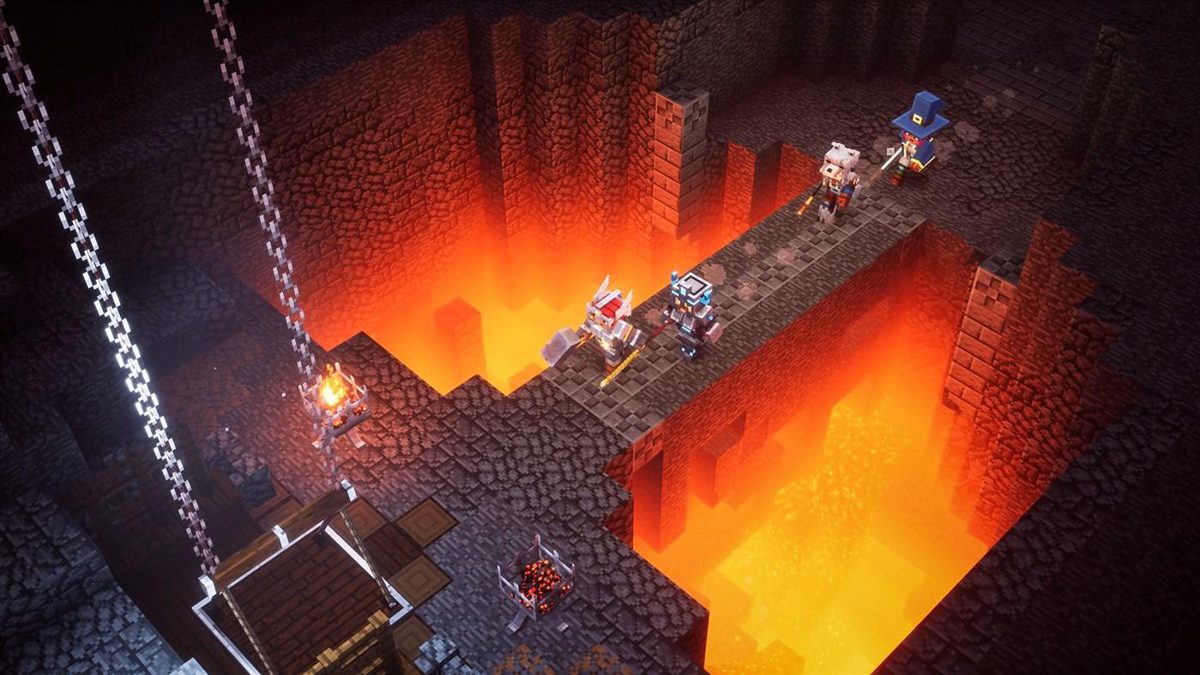 It’s indisputable that Minecraft is one of the greatest gaming success stories of the 21st century. The game started off as a clunky passion project coded mostly over a weekend and released for free on an indie developer forum in 2009. Five years later, it was a worldwide phenomenon and sold to Microsoft for $2.5 billion. This humble digging-and-building title has captivated gamers on seemingly every platform over the last decade.

Mojang continues to update and develop the base game, and will probably do so for many years to come. But it’s also started to branch out and find ways to exploit the IP. We’ve already seen one spin-off courtesy of Telltale Games with Minecraft: Story Mode, as well as the poorly received AR game Minecraft Earths. This is pretty different—a Minecraft with no mining or crafting. Welcome to Minecraft Dungeons.

Here’s the elevator pitch: a great evil is threatening the land with swarms of familiar Minecraft mobs, and a lone hero must battle it back. But instead of the often-awkward first-person perspective of the base game, this time you’re hacking and slashing in isometric third-person.

If you’ve played games like Diablo, you know what you’re in for here. The player ventures through self-contained levels slaying monsters and grabbing treasure to outfit their blocky hero to challenge harder levels, repeating as needed. Bad guys drop gear that can make you a more efficient damage-dealer or a sturdier tank.

Randomly generated levels span nine unique biomes, and once you’ve completed the main campaign—estimated to hit between seven and nine hours—two additional difficulty levels open up. You can also tweak difficulty by individual area to increase the chances of rare loot dropping.

Dungeons capitalizes on one of Minecraft’s most successful, if accidental elements—its lore. Despite not having a canon explanation for how or why you ended up in this world made to be exploited and remade, the creepers, endermen, and other denizens of Mojang’s world have become iconic to gamers of a certain age. You just have to look to the success of the tie-in toys and other merchandise to see how much people care about them.

The biggest problem with Dungeons, though, is depth. Or, rather, the lack of it. The original Minecraft is a game you can play nearly forever, experimenting with a massive sandbox of items and materials that interact in fascinating ways. You can challenge yourself in survival mode, chill out in creative, build and explore with friends or alone—the core experience adapts itself to a variety of interests.

Dungeons strips all of that away. Sure, it has co-op, but it’s not significantly different from the single-player experience. There’s just one thing to do here, which is smash monsters and grab armor, weapons, and other cruft. Despite some fun effects and nice environment design, it gets old pretty quick. It’s amusing to mess around with the artifacts that give you special abilities, like leaving a trail of fire when you run or summoning a helper in battle, but the thrill doesn’t last. The charm of Minecraft’s lore isn’t enough to overcome the limited game loop. 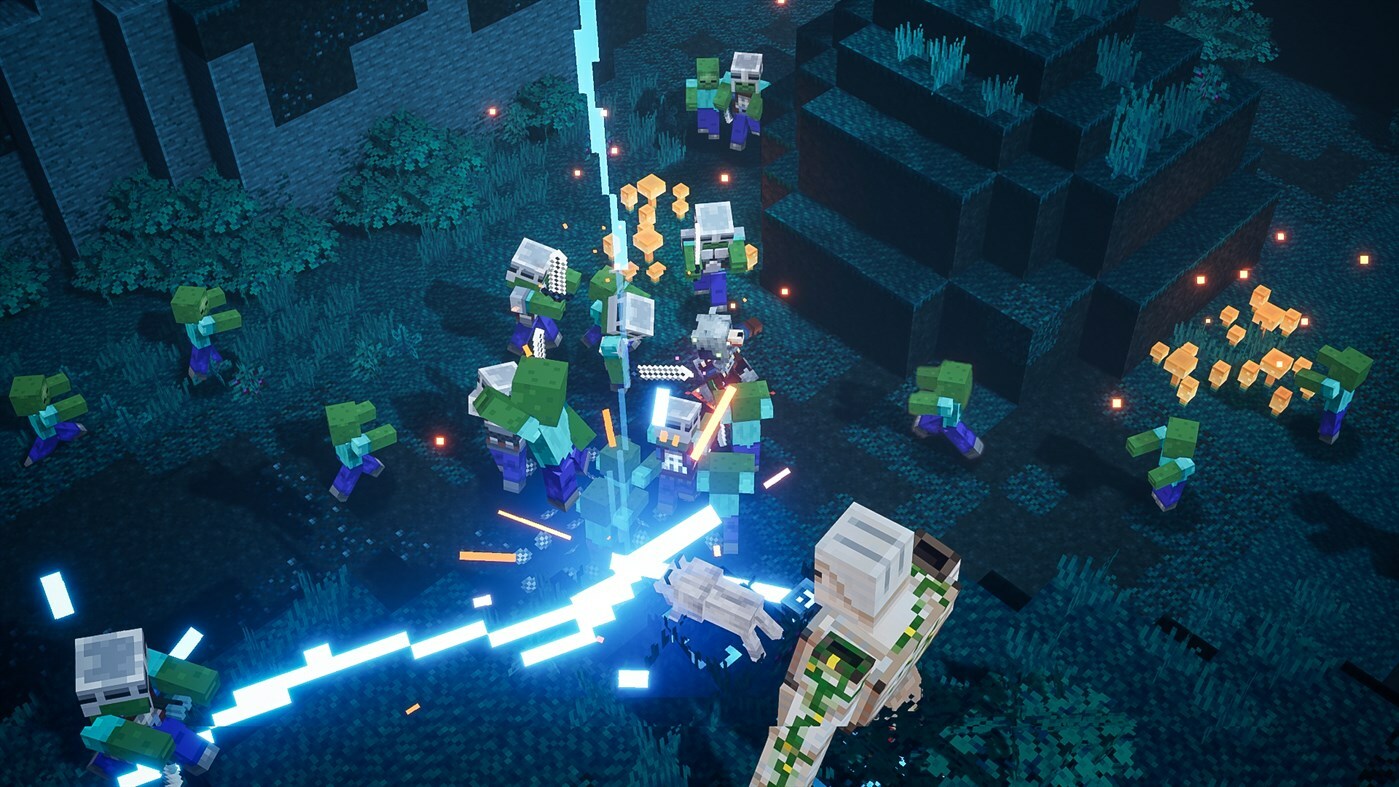 Worse, the deterministic nature of Minecraft’s digging and crafting is replaced by what can seem like an infuriating randomness. Loot drops come with a trio of selectable perks, but often they won’t mesh with the character build you’re working on, and that becomes more and more noticeable as you advance toward the endgame. Instead of giving you the feeling of freedom and creativity, it frustrates.

Mojang is promising updates and patches with new stuff in the future. This might mitigate some of these concerns, but at the end of the day, it’s hard to see Dungeons having a lifespan anywhere near Minecraft itself. It’s a perfectly good game, made with incredible polish, but I can’t help thinking that it would be better without the franchise name.

For better or worse, we come into Minecraft expecting a certain kind of experience. While Dungeons has all of the visual and thematic trappings of Mojang’s generation-defining hit, it lacks the spirit of the thing. It feels like a perfectly fine Diablo clone in Minecraft pajamas.

How would we save Minecraft Dungeons? Look to what made the franchise such a winner in the first place and let players build. While giving your heroes a pickaxe and the ability to deform terrain would be massively unbalancing to the combat-focused levels, it just doesn’t seem like Minecraft without it.

The solution is simple: let players also be the Illager, the evil entity that serves as the final boss of Minecraft Dungeons, setting up their own levels for other players to fight through. Adding that element of creativity could make it actually feel like a legitimate Minecraft game instead of a reskin, and it would also extend the game’s lifespan way beyond the limited content developers can create on their own.

There are obvious precedents for this formula—Nintendo has done it with Super Mario Maker, which drew from the myriad 2D outings of the iconic plumber to let gamers craft levels for others to jump and run through. The relatively straightforward design of Minecraft Dungeons seems like it would be fairly simple to create a level editor for. Mojang could even tie item and enemy unlocks to progress in the main campaign to create an addictive loop of discovering new creative elements and testing them out in the editor.

Think about the incredibly clever contraptions people have made in vanilla Minecraft simply by combining discrete objects with known properties in new ways. Now apply that to the bounce pads, lasers, and other cool stuff that you contend with in Dungeons. Automatically, you’ve got a game that creates its own replayability, which is one of the core tenets of the brand.

Minecraft Dungeons is a perfectly fine game, especially at the $20 price point. However, it feels like a missed opportunity right now. More cynically, it seems like an attempt to capitalize on the massive goodwill the franchise has built up without adding to the world in any meaningful way. We’ll see whether Mojang can make it into something truly special.