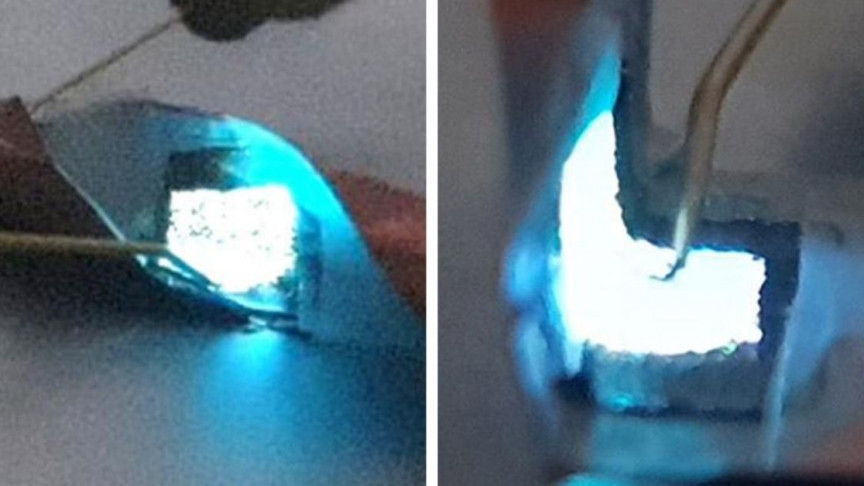 A team of researchers and colleagues abroad developed a new type of micro LEDs people can fold, twist, cut, and stick to disparate surfaces, according to a recent study published in the journal Scientific Advances.

This could open the door to a next-gen era of flexible, wearable technology.

RELATED: A GROWING INDUSTRY: FUTURE OF WEARABLES IN THE TECHNOLOGY SECTOR

Micro-LEDs may transform the future of wearable technology

LEDs are used in a wide range of products, from brake lights to billboards, reports TechXplore. They’re great components for backlighting and displays in electronic devices because they’re thin, energy-efficient, lightweight, and visible in several types of lighting.

Micro LEDs are as small as 2 micrometers and bundled into groups of any size — providing greater resolution than comparable LEDs. Their small size makes them an ideal choice for small devices like smartwatches, but they also work with flat-screen TVs when bundled, in addition to larger visual displays.

However, LEDs of every size are brittle, and usually only work on flat surfaces.

The researchers’ new micro LEDs could fill the demand for wearable electronics capable of bending and contorting to the job at hand.

“The biggest benefit of this research is that we have created a detachable LED that can be attached to almost anything,” said the Louis Beecherl Jr. Distinguished Professor of materials science and engineering Moon Kim of UT Dallas, along with a corresponding study author. “You can transfer it onto your clothing or even rubber — that was the main idea. It can survive even if you wrinkle it. If you cut it, you can use half of the LED.”

The flexible LED was developed in part with help from researchers in the Erik Jonsson School of Engineering and Computer Science, in addition to the School of Natural Sciences and Mathematics — via a technique called remote epitaxy.

Remote epitaxy involves growing a thin layer of LED crystals on the surface of a sapphire wafer of crystal — also called a substrate.

LED typically stay on the wafer. But to make it detachable, the researchers added an extra non-sticking layer to the underlying substrate, which behaves the way parchment paper protecting a baking sheet does — to make removing cookies quick and easy. The extra layer consists of an atom-thick sheet of carbon called graphene, which prevents the new LED-crystal layer from sticking to the wafer.