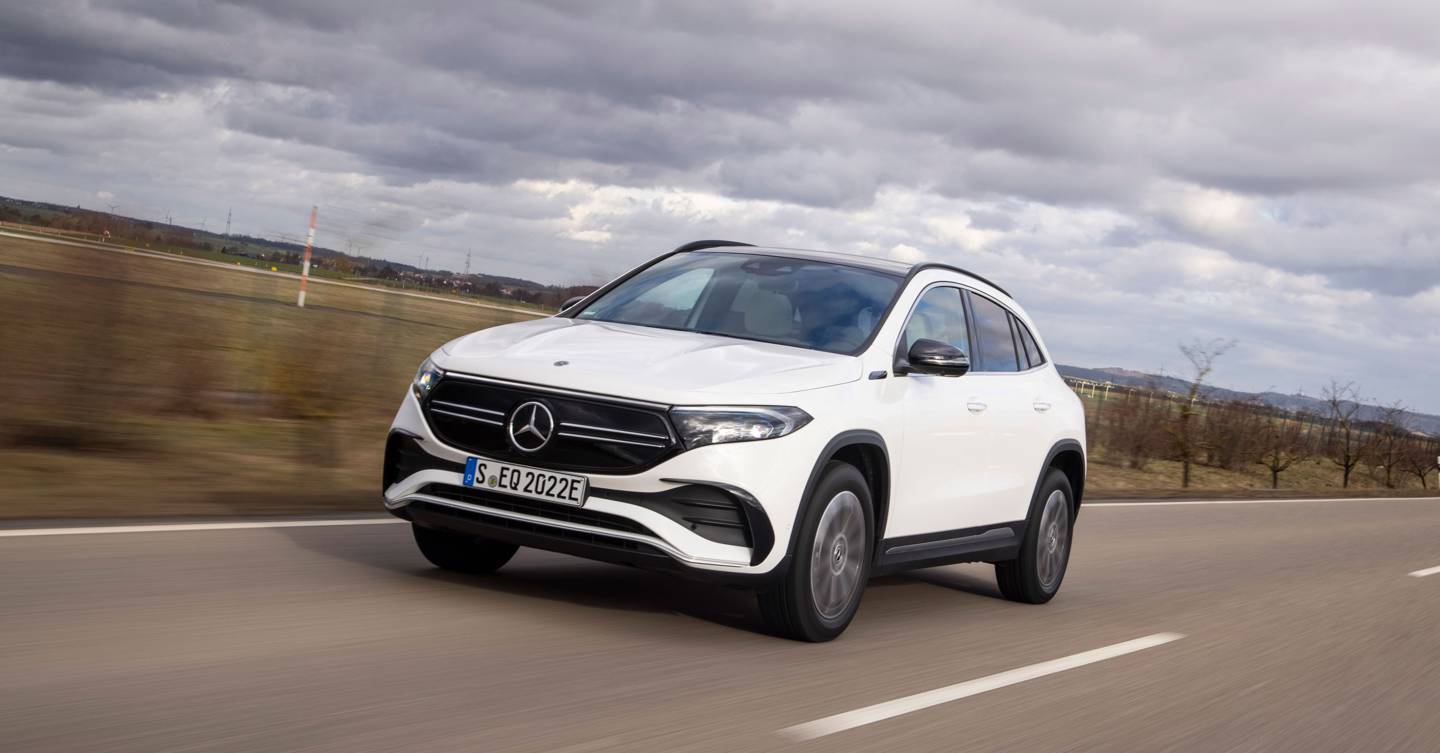 However you want to measure it, Mercedes is currently on the back foot when it comes to electrification. Despite huge success in the hybrid-powered F1 championship and race wins for its newly formed Formula E entry, the three-pointed star lags behind when it comes to all-electric road cars.

The EQA aims to change that. Following the EQC SUV, the new compact SUV is an entry-level gateway into Mercedes’ growing range of EQ electric cars – and it’s arguably the most important.

With a starting price of just £43,000, it undercuts similar models from BMW and Volvo. However, like the XC40 and the iX3, the EQA is based on an existing, conventionally powered car.

Take one look at the EQA and it easy to work out its lineage. Mercedes’ second EV uses an adapted chassis from its GLA crossover, and it doesn’t really hide it. The EQA gets a new grille over the GLA – as the EV doesn’t need as much cooling and it also creates drag – and there’s also different front and rear lights.

It wears a lightbar at the rear, like the Polestar 2, Audi e-Tron GT, Porsche Taycan – and most other EVs seem to in 2021. In some ways the EQA appears as a more futuristic version of the GLA – but a GLA all the same.

It’s a shame as the Concept EQA Mercedes revealed at the 2017 Frankfurt motor show looked significantly different. More A-class in its height and more futuristic in execution, the concept shown four years ago feels a world away from the crossover we’re driving now.

The interior of the EQA should also be familiar to anyone who has previously sat in a GLA or A-class, too – though that’s not necessarily a bad thing. The only real change here is the cockpit dials, which have been reworked for an electric powertrain.

Like the compact and crossover on which its based, the GLA makes use of Mercedes’ MBUX platform, and it’s still impressive compared to the competition.

Unlike other systems, MBUX doesn’t force you to use a touchscreen – though it has one – and instead keeps most of controls on the transmission tunnel – exactly where your hand naturally falls. It’s easy to swipe between songs and menus using a raised touchpad, and gestures such as pinch-to-zoom quickly become second nature.

The EQA’s setup may not look as innovative as the multiple touchscreen setups you’ll find in more expensive cars, but it’s certainly easy to use – especially while driving. Mercedes even provides a wrist support, so it’s comfortable, too.

A 10-inch touchscreen is the main source information for the driver, and it packs in a range of useful features. Mercedes’ sat-nav augmented reality function uses a camera and bold graphics to place floating directions above real-world roads, and it genuinely comes in handy.

Remember to say ‘hey Mercedes’ instead of ‘hey Siri’ or ‘hey Google’ and you’ll also unlock other functions; adding ‘I’m cold’ will make the GLA up the heating, while saying ‘take me to’ along with destination will summon the sat-nav. In practice it’s one of the better voice command-based systems – and because it’s subject to over-the-air updates, it’ll only improve.

If the above sounds a little too much to learn, the EQA includes Apple CarPlay and Android Auto. Using either means the Mercedes’ UI will make way for Google or Apple’s, and although the MBUX interface is easy to get on with, it’s nice to have the option.

Less impressive, but still useful, is the EQA’s adaptive cruise control which can be easily configured via buttons on the wheel. It’s the same system you’ll find on other Mercedes cars, and it plays to this car’s comfort-orientated strengths.

What really sets the EQA apart from the GLA then, is what’s under the bonnet – or rather what’s not. The EQA 250 we drove uses a single electric motor with 187bhp, and pairs it with a 66.5kWh battery pack. Range stretches to a competitive 249 to 263 miles, putting it in the same neighbourhood as the iX3 and the midrange iD3.

Those who want more speed and range will need to wait; the 250 is the entry-level model, and it’ll be joined by higher-spec EQAs in the future – some with more than one motor for a significant increase in power. But in practice, you’ll rarely need more juice.

Driving the EQA involves a steep learning curve for the first few miles, and it can feel somewhat confusing to the new driver – especially one without EV experience.

Like many EVs, the EQA offers the instant torque to 30mph as you’d hope for – and it does the 0-62mph dash in just 8.9 seconds – but it initially feels mismatched when paired with the comfortable, un-dynamic chassis of the Mercedes crossover.

It starts off a little jerky, as you get used to the instant power delivery, but you soon change your inputs. After a while you’ll find yourself rolling on the throttle, easing on the brakes and generally being more composed. Rather than changing the acceleration of the car, Mercedes wants you to feel the EV’s quick response, and adapt to it.

The EQA treats regeneration differently, though, and in this area it’s more like a conventional car. It’s only when using the paddles or changing the mode to Eco-comfort that the car more aggressively hoovers up excess energy.

But one-pedal driving in the EQA feels counterintuitive; rather than coasting and using light regen, heavier regeneration modes force you to reapply the throttle – likely using more energy on balance.

But get going and the EQA offers a comfortable ride that’s quiet and smooth on motorways and equally relaxed around town. Familiarise yourself with Mercedes’ power delivery, and the EQA demonstrates the peaceful benefits of a largely silent, emission-less powertrain.

So, the EQA is proficient without being game-changing. Reheated looks and an adapted chassis aren’t the best combination on paper, but the result is an EV that does the job inside and out, if comfort is high on your agenda. And at around £44,000, it could prove more popular than its EQC sibling – as well as pricey rivals such as the BMW iX3.