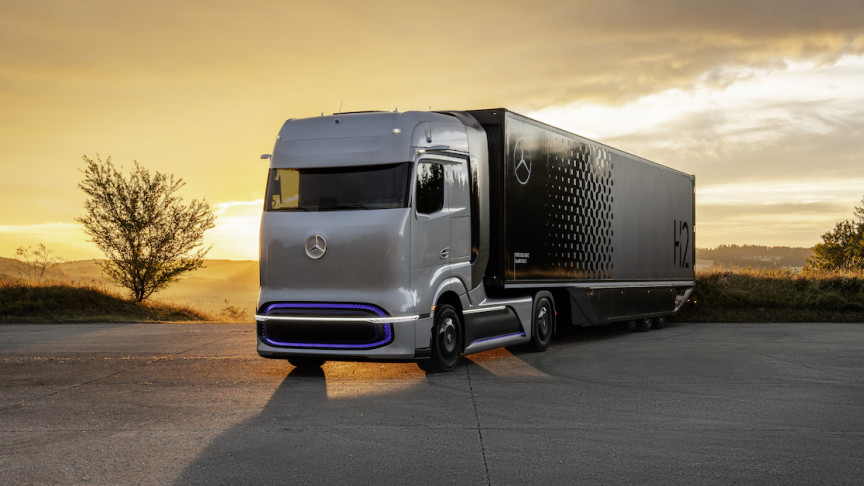 Daimler Trucks, the commercial truck division of Mercedez-Benz, unveiled three trucks alongside its “technology strategy for the electrification of its vehicles,” yesterday.

The German firm revealed two battery-electric truck, the eActros, the eActros LongHaul, as well as the GenH2, a new concept fuel cell truck that will have “a range of up to 620 miles (1,000 kilometers).”

RELATED: VOLVO AND DAIMLER TO JOIN FORCES TO PRODUCE FUEL CELL FOR TRUCKS

The Mercedes-Benz GenH2 Truck is a fuel-cell truck with a range of “up to 620 miles (1,000 kilometers) and more,” Daimler explains in a press statement. The truck will come with a battery system as well as hydrogen fuel cells.

Daimler says the electric-fuel cell truck should start customer trials by 2023, however, production is not expected to start until the second half of this decade.

“In the series version of the GenH2 Truck, the fuel-cell system is to supply 2 x150 kilowatts and the battery is to provide an additional 400 kW temporarily,” the company’s statement reads.

“At 70 kWh, the storage capacity of the battery is relatively low, as it is not intended to meet energy needs, but mainly to be switched on to provide situational power support for the fuel cell, for example during peak loads while accelerating or while driving uphill fully loaded.”

The new eActros LongHaul truck, an electric battery vehicle, will have a range of “about 310 miles (500 km),” Daimler says. The company expects the new electric truck to be “ready for series production in 2024.”

The smaller eActros, meanwhile, has “a range of well over 125 miles (200 kilometers)” which makes it ideal “for heavy urban distribution,” Daimler says. The company says it plans for the shorter-range vehicle to go into series production in 2021.

All of this is part of Daimler and Mercedes-Benz’s sustainability strategy, detailed in the press statement, in which the company highlights that hydrogen vehicles will form an integral part of its future plans.

“We need zero-carbon goods vehicles on our roads,” explained Andreas Scheuer, Federal Minister of Transport and Digital Infrastructure, following the unveiling of Daimler’s plans. “These include hydrogen fuel cell trucks. There is huge potential inherent in hydrogen for the protection of our environment and a strong economy,” he continued.