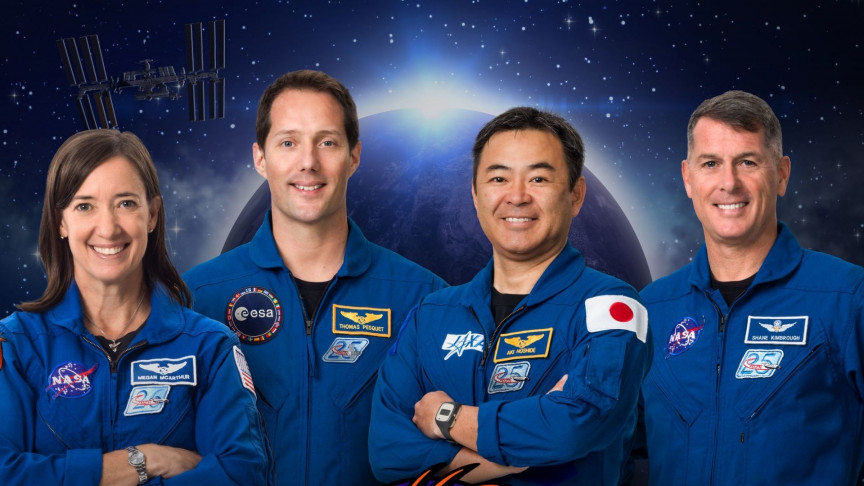 SpaceX’s upcoming Crew-2 flight is slated for an April 20 launch, courtesy of the company’s Crew Dragon spacecraft atop a Falcon 9 rocket.

As the second crewed mission for SpaceX since the Crew-1 launch in November 2020, it’s tempting to think the Crew-2 mission will be a cakewalk — but even after the astronauts arrive for their six-month stay aboard the International Space Station, the work ahead of them will be, as always, daunting.

“We don’t have much free time,” said Astronaut Thomas Pesquet of the European Space Agency (ESA) — one of four on the Crew-2 mission — during an interview with Interesting Engineering. “We work twelve-and-a-half hours per day, starting at 7:30 AM, and finish at 8:00 [PM].”

Pesquet is a mission specialist for SpaceX’s Crew-2 mission, and once aboard the ISS, he and other astronauts will execute “hundreds of experiments. Some of the science we’re doing is unbelievable,” he told Interesting Engineering (IE).

“Nowadays we’re doing tissue engineering, trying to build artificial retinas for people with eyesight pathologies,” explained Pesquet. The “reason we’re doing it is because those techniques involve mechanical processes at the cell level that are influenced by gravity.”

Another experiment involves contained crystal growth, which is what drugs are made from, according to Pesquet. “[P]roteins and crystals have irregular shapes” because they “collapse under gravity — but on the space station we can have almost perfect crystal shapes,” which can advance pharmaceutical research in ways no one on Earth can.

With such a heavy interdisciplinary workload, it’s tempting to think astronauts are all polymaths — experts with doctoral degrees in multiple disciplines who could teach quantum physics in their sleep.

Not so, according to Pesquet.

“We’re not experts on all the fields — there’s fundamental physics, engineering, tech,” and more, Pesquet told IE. “We don’t get a Ph.D. in every single discipline.” Although astronauts can train for 10 or 20 hours on a subject related to science missions, they phone in for help.

“Once you’re on board [the ISS], the experts are on the ground, thousands of them tell you what to do,” Pesquet said. “Sometimes you get to talk with them with a camera over your shoulder — you’re the hands and they’re the brains.”

Luckily for the astronauts, it’s not all work and no play on the ISS. Outside of the roughly 12-hour workday (which sounds grueling) “there’s meals involved, [and] downtime to check your email or watch a movie,” said NASA Astronaut and Spacecraft Commander Shane Kimbrough in another interview with IE. “It’s pretty tight quarters, I’ve done it a few times — [and] know what to expect.”

Kimbrough also mentioned that this mission will be NASA Astronaut K. Megan McArthur’s first time on the ISS. McArthur is the fourth crew member of Crew-2, and was not able to speak with IE. But all astronauts will have downtime to relax. “We get together on the weekends to watch movies together,” said Kimbrough.

The menu on ISS is better than most would imagine. Instead of Army rations in packets like the old days of NASA’s initial Mercury missions, modern-day astronauts can bring exquisite cuisine from their home countries. “One thing I’m looking forward to is sharing curry and rice with astronauts on mission,” said JAXA Astronaut and Mission Specialist Aki Hoshide, in a third interview with IE. Sharing Japanese food “has been a tradition since the first JAXA mission to the ISS.”

Obviously, spending six months cooped up in a proverbial tin can — regardless of the ISS’ relatively large size — can leave people feeling a little homesick. This is why there’s a room that gives astronauts what is arguably the best view of Earth in the universe. Called the Cupola module, this section of the ISS has “windows to look at Earth all the time,” said Kimbrough, referring to a module featuring seven windows and shaped like a dome, which was built by the ESA and installed in 2010. “It’s a cool place to watch the Earth as it goes by in literally 90 minutes.”

And the astronauts will also go outside. “Currently there are four spacewalks planned while we’re on board,” said Kimbrough to IE. “Going outside is absolutely spectacular — incredibly hard work, it’s a long day.” Typically we associate weightlessness with effortlessness, but nothing could be further from the truth when it comes to a real spacewalk.

“It looks effortless and smooth and great, but we are working really hard every time we’re moving our hand or installing something,” Kimbrough explained to IE. It’s a “very hard challenge mentally as well as physically,” since, in outer space, “you know the stakes are high.”

Spacewalks last six or seven hours, but “you go into spacesuits three or four hours early,” which means astronauts may spend up to 10 hours inside one. To prepare for prolonged physical exertion, astronauts train underwater.

JAXA astronaut Hoshide led a mission called NEEMO 18 to the Aquarius underwater base, off the coast of Florida. “[W]e did a ‘spacewalk’ out in the ocean … it’s dangerous because you might float up and get into a dangerous situation,” he told IE. “Just like a spacewalk in that respect.”

Aquarius base is not very large, but since it’s effectively isolated from the world, it also prepares astronauts for the realities of living in space, where, sometimes, things go wrong.

“Any time you have people in a small space with long periods of time,” there is the possibility of personality issues, Kimbrough said. While every astronaut undergoes serious psychological evaluations, emergent issues can lead to possible schisms while aboard — even without a crisis like a possible system failure. “Any expedition that has explored things beyond planet Earth, I’m sure they run into it eventually,” he added.

However, Kimbrough doesn’t expect any issues with Crew-2’s personnel. “Looking forward to this crew.”

“Some of the experiments and tech we’re working on is really meant to be used on the moon and Mars,” said Pesquet to IE. “And we’re using the space station as a test-bed for the technology.”

“This will open more space for private projects and stations, like private hotels in space,” added Pesquet. And, as joint projects between several space agencies and entities — including NASA, the ESA, JAXA, SpaceX, and more — begin construction of the Lunar Gateway in the next decade, present-day astronauts might find themselves stepping off a spacecraft not onto a station, or the Earth — but the moon itself.

It’s “certainly an exciting time right now with the commercialization of low-Earth orbit and Artemis program kicking-in,” said Hoshide to IE. “I would definitely be interested in going to the moon. Mars is a little out of reach — [it’s] for the next generation. But the moon would be wonderful for me.”

Some may remember a final gesture from SpaceX’s Crew-1 before launch — holding up one finger, to say: “One for all.” According to Hoshide, Crew-2’s hand signal will be two fingers, instead of one. Whether this is for peace or victory, we can’t say. But wonders await the intrepid and international crew ready for six months of working and living in space.