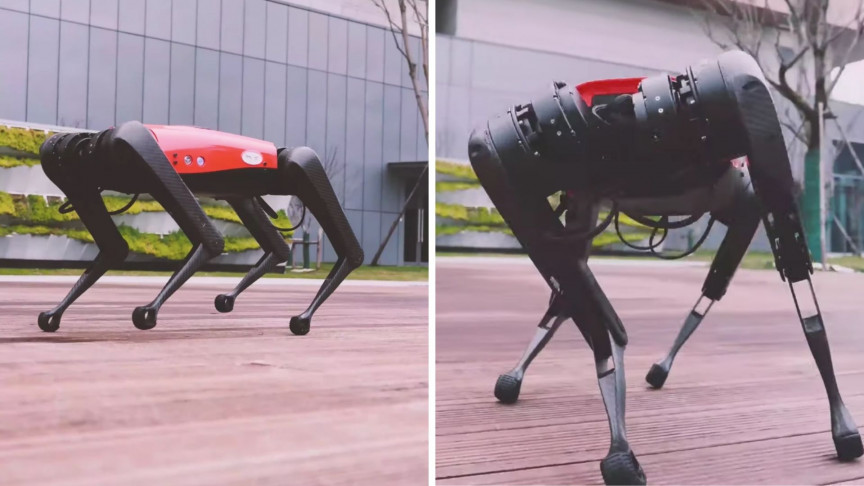 Though AlphaDog’s design is very similar to that of Boston Dynamics’ Spot robot — and it even has the same name as an early Boston Dynamics prototype — the Chinese firm’s four-legged machine is aimed squarely at the commercial market, rather than businesses.

The developers of AlphaDog say the robot, which moves at a speed of almost 9 mph (15 km/h), is the fastest robot on the market.

In a similar fashion to those viral Boston Dynamics videos, demonstrations of AlphaDog see it keep its balance after being kicked by its human creators.

“It can predict the friction and height of the ground (to) adjust its height, adjust the stride frequency, and adapt to the environment,” Ma Jie said.

AlphpaDog’s creators are using 5G technology to make the robot operate autonomously. Ma, who studied reinforcement learning at the University of Oxford, says he has used the knowledge gained during his studies to inform how the AI dog mimics the behavior of real canines.

“Orders are mostly from computer developers, tech geeks, and also kids, who really seem to like it,” said Ma.

Though AlphaDog doesn’t currently come with the feature, Weilan developers hope that it will eventually be able to help to guide the visually impaired. They aren’t the only group developing such a technology — researchers from the University of California, Berkeley, are working on a GPS and laser-enabled robodog for the same purpose.

“To help the disabled is an important developing direction for us,” Ma explained. “When the robot dog has the function of vision, hearing, and dialogue too, it can easily interact with disabled people, and lead them to the supermarket or the bus.”

Weilan also has a larger “enterprise” dog model for industrial inspection and maintenance of machinery. However, it is seemingly focused on setting itself apart from the competition by offering a commercially available robodog.

Future software updates for the mechanical mutt will include the dog “barking,” and, eventually, a human voice function to allow conversations and commands between robopet and owner.