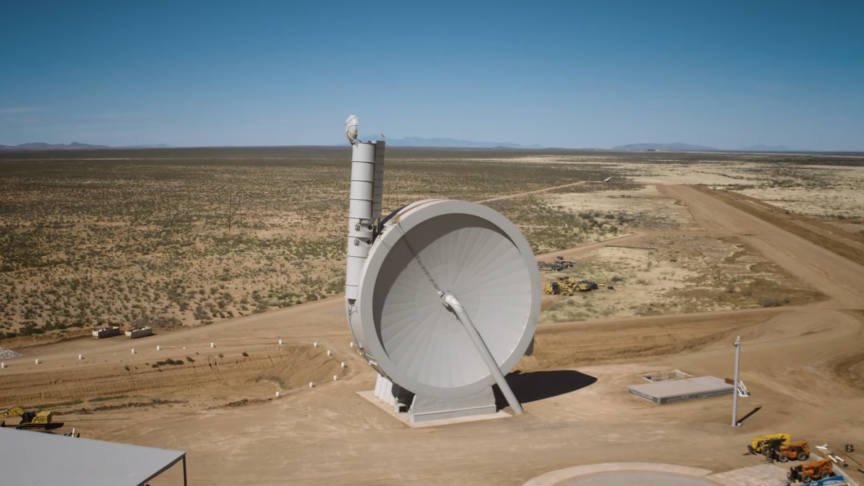 Why use unsustainable rocket propellants for small satellite launches when you could just catapult them into space?

It might sound like a mad proposition, but a California-based startup, SpinLaunch, is actually developing an alternative rocket launch technology that spins a vacuum-sealed centrifuge at several times the speed of sound before releasing the payload, launching it like a catapult up into orbit.

According to a report by CNBC, SpinLaunch conducted the first test flight using its prototype electric launch system last month, October 22, at Spaceport America in New Mexico. The company not only aims to provide a more sustainable launch system, but it also aims to provide satellite launch services “at the lowest cost in the industry,” SpinLaunch CEO Jonathan Yaney explained in an interview with CNBC.

Rocket launches are bad for the environment, as one launch generates several hundred tons of CO2, uses thousands of gallons of water, and also releases harmful nitrous oxides into the atmosphere — though the space industry’s carbon footprint does pale in comparison to that of passenger airliners. With its launch system, called the Suborbital Accelerator, SpinLaunch would provide a vastly more sustainable launch process that is reliant on electricity and kinetic energy.

An ‘audacious and crazy’ space project

SpinLaunch was founded in 2014 and has remained under the radar, with Yaney telling CNBC that “the more audacious and crazy the project is, the better off you are just working on it – rather than being out there talking about it.” The company has raised $110 million to date and it has so far built a one-third scale version of its launch system which it used for the recent successful test flight. Even at a third of the scale, it’s worth noting that it still reaches a height of 165 feet (50 meters), meaning that the final model would be roughly the same height as the Eiffel Tower.

For the system, SpinLaunch has to develop and test incredibly precise release mechanisms as well as projectiles that can reach speeds of thousands of miles per hour after being catapulted into the air. The company says that its test flight in October was conducted at approximately 20 percent of its prototype system’s full power. Though it hasn’t released exact figures, it says the projectile, which stands in for a satellite payload, reached an altitude “in the tens of thousands of feet.”

SpinLaunch aims to recover its systems after launch, and it eventually wants to add rocket engines that would only be utilized once the projectiles have already reached suborbital space. The private space enterprise says it will eventually be able to send about 440 lbs (200 kg) of payload to orbit at a fraction of the cost of other satellite launch services. Over the next eight months, SpinLaunch will conduct roughly 30 suborbital test flights from Spaceport America. Stay posted for more updates on this crazy technology that may just change the small satellite launch industry for good.