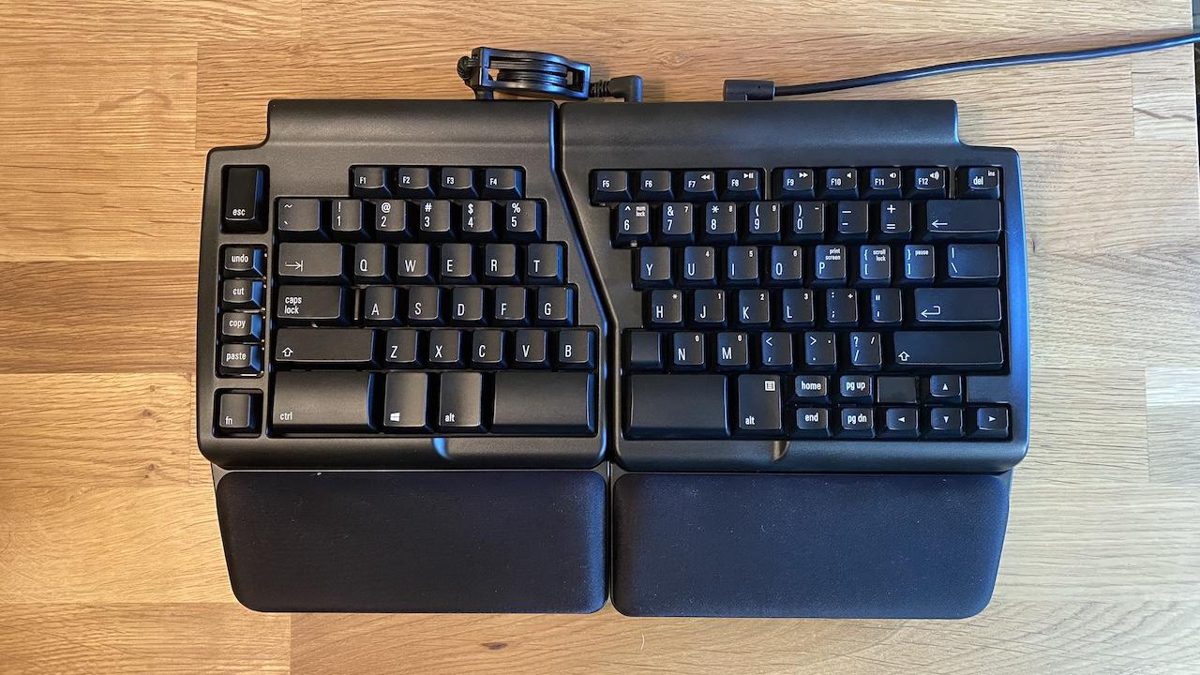 If you’re on your PC all the time—for hours each day—you will eventually want to consider switching to a split keyboard. The odd-looking two-piece typing gizmo, which breaks up the keys in half so you don’t have to squeeze your arms in front of your body and twist your wrists flat, can help minimize pain for people with repetitive stress injuries (RSIs) and possibly help to slow the onset of such disorders in PC power users. Matias, a small but longstanding player in the ergonomic keyboard space, recently updated its Ergo Pro keyboard ($220 for the programmable version), adding software-free key remapping and macro support on a limited number of keys. Though the 2020 model represents a relatively minor upgrade that likely should have happened years ago, the Matias Ergo Pro still nails the core proficiencies of a split mechanical keyboard with a comfortable typing feel, strong ergonomic features, and a couple of technical flourishes you won’t find anywhere else.

If the Matias Ergo Pro wasn’t split in two, it could easily pass for a generic office keyboard. The 87-key tenkeyless board is encased in thick, black plastic and features black keycaps with laser-etched white legends. There’s no backlighting, no logo, nothing unnecessary. The focus is on function, which makes sense for an ergo keyboard.

As a split keyboard, though, the Ergo Pro is anything but generic. The keys are spread across two similarly sized chassis which are connected by a bridge cable. The inner edge zig-zags to compensate for the uneven break between the two sets of keys, giving the two sides odd but complementary shapes. (You can push them together if you’re so inclined, though the cases still create a small gap between the left- and right-hand keys.) 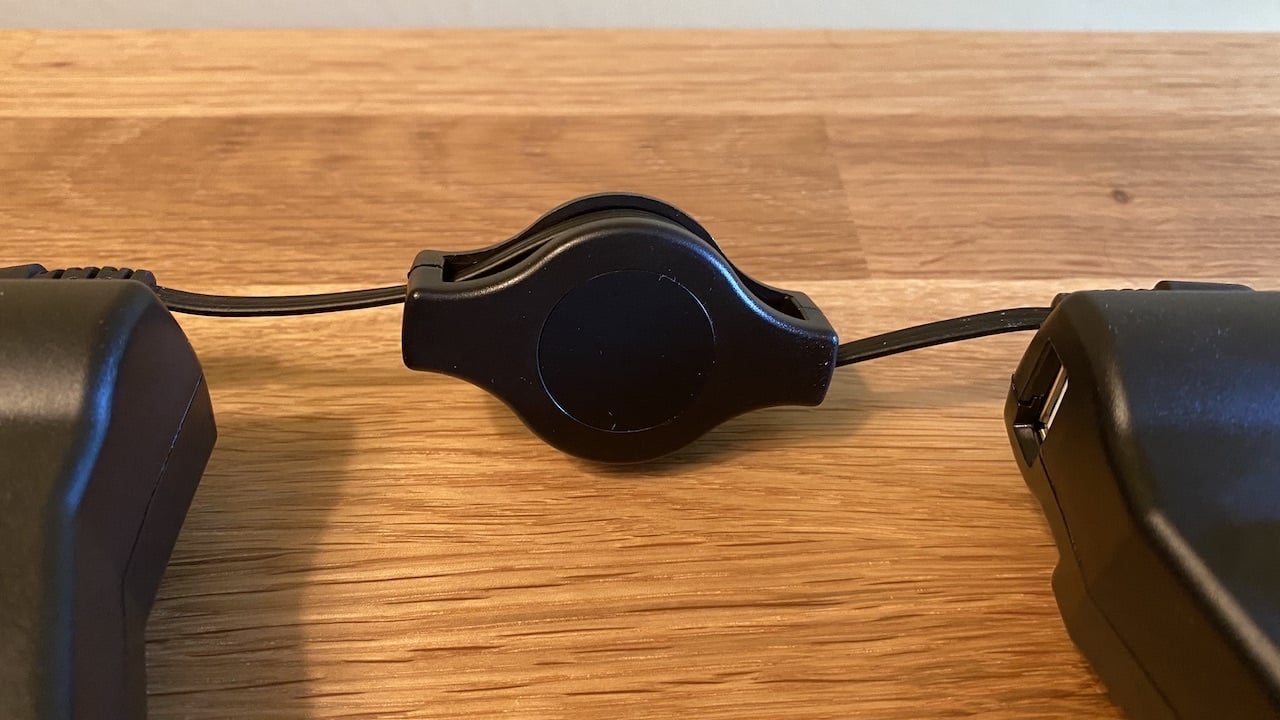 Though the Matias comes with multiple options, you’ll likely want to use the longer retractable bridge cable, which you can extend and set to the perfect length. Having a bridge cable that snaps into place is a small but important touch: When the cable’s too long, it tends to snag on items from your desk. When it’s too short, you not only fail to take full advantage of the split keyboard, but tense wire can feel like a constraint.

And it is crucial that you aren’t constrained when using a split keyboard. In fact, using one should be the most comfortable typing experience you’ve ever had, ignoring the fact that you may not be able to find your fingering. Splitting a keyboard in two gives each user the ability to adjust the width of the keyboard to fit. Ideally, you want the halves separate so you can type without pulling your arms in toward the center of your body. You also want to tilt them so your arm and wrist don’t need to twist to line up with the typing surface.

These motions, which you take and hold whenever you use a keyboard, can lead to repetitive stress injuries, which cause pain and numbness in your hands, among other things. Simply by using the split form factor, the Matias Ergo Pro accomplishes its primary goal, giving you the opportunity to set up your keyboard in a way that will minimize long-term damage and avoid pain if you already have a problem. 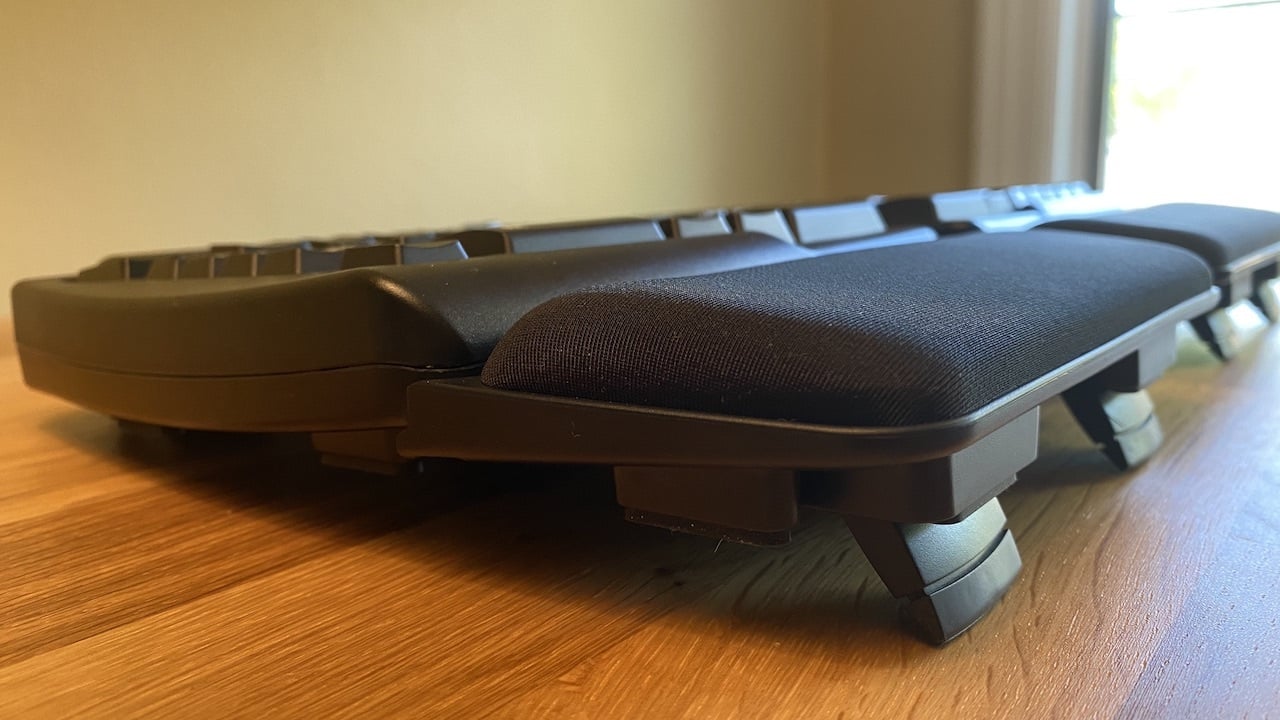 Of course, there is more to it than that. If you flip the keyboard halves over, you’ll see the Ergo Pro has six adjustable feet instead of the usual two. Positioned on three of the four corners of each keyboard half, the feet give you the ability to reverse tilt, raising the front of the keyboard by up to 4.5 degrees to support your wrists, or tent, raising the middle by up to 9 degrees to minimize wrist twisting. Both modes raise the firm but well-padded detachable wrist rest to a point where your arms feel supported.

That said, using the same paddle-style feet found on most keyboards limits your capacity to fine-tune them. In theory, you can tilt the feet at different angles to lift the keyboard at a steeper or shallower incline, but the feet only stay in a few positions. Any attempt to fine-tune to an intermediate tilt or tenting angle will put your keyboard in a shaky position, prone to slip out of place. More important, the feet don’t feature any way to help you determine the incline or set the same angle across all the feet. It isn’t too hard to get the keyboard feet pointing at roughly the same angle, but perfection isn’t a given. It would be helpful to have a way to quickly and accurately adjust these settings. 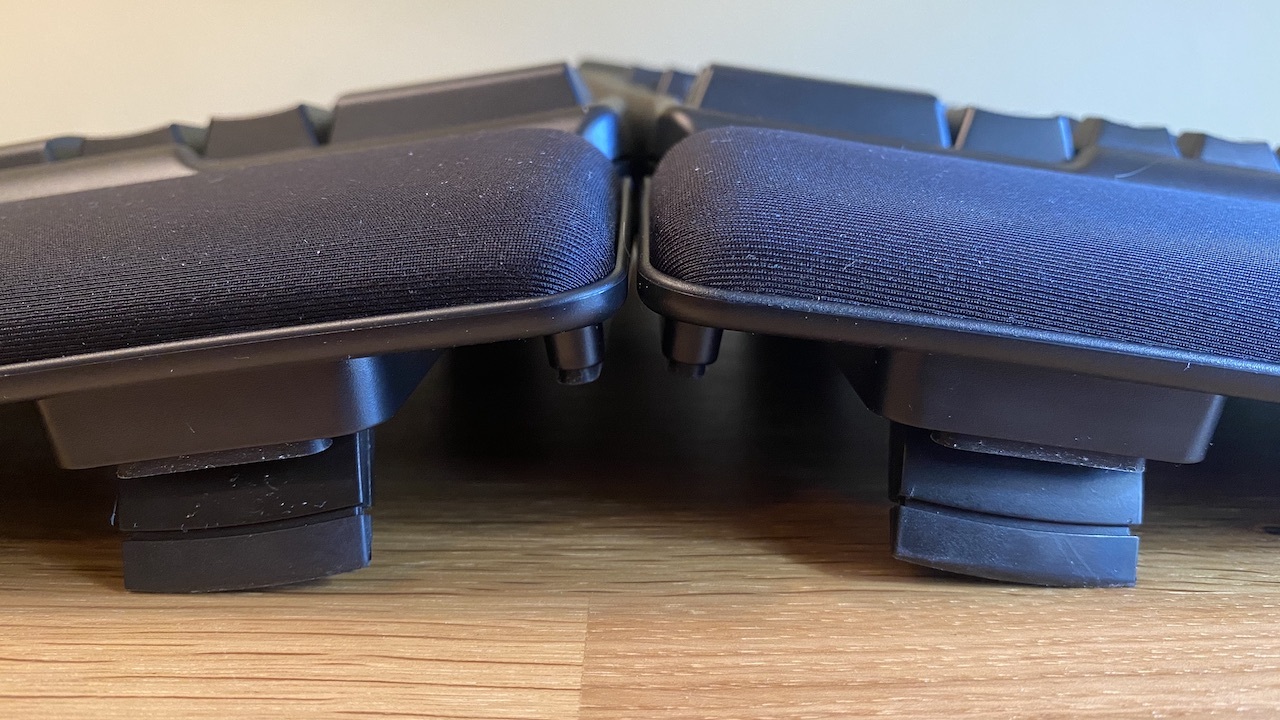 Even the key layout has been adjusted in a few small ways to minimize stressful wrist and finger moves. On the left-hand side, there’s a column of six keys offset from the left edge. Two of these, Fn and Escape, are simply further off the left edge than usual, but the other four—Undo, Cut, Copy, and Paste—are all dedicated shortcut keys. Though they require a little bit of reaching with your pinky, having these keys cuts down on bending your finger back to hit the Ctrl key. 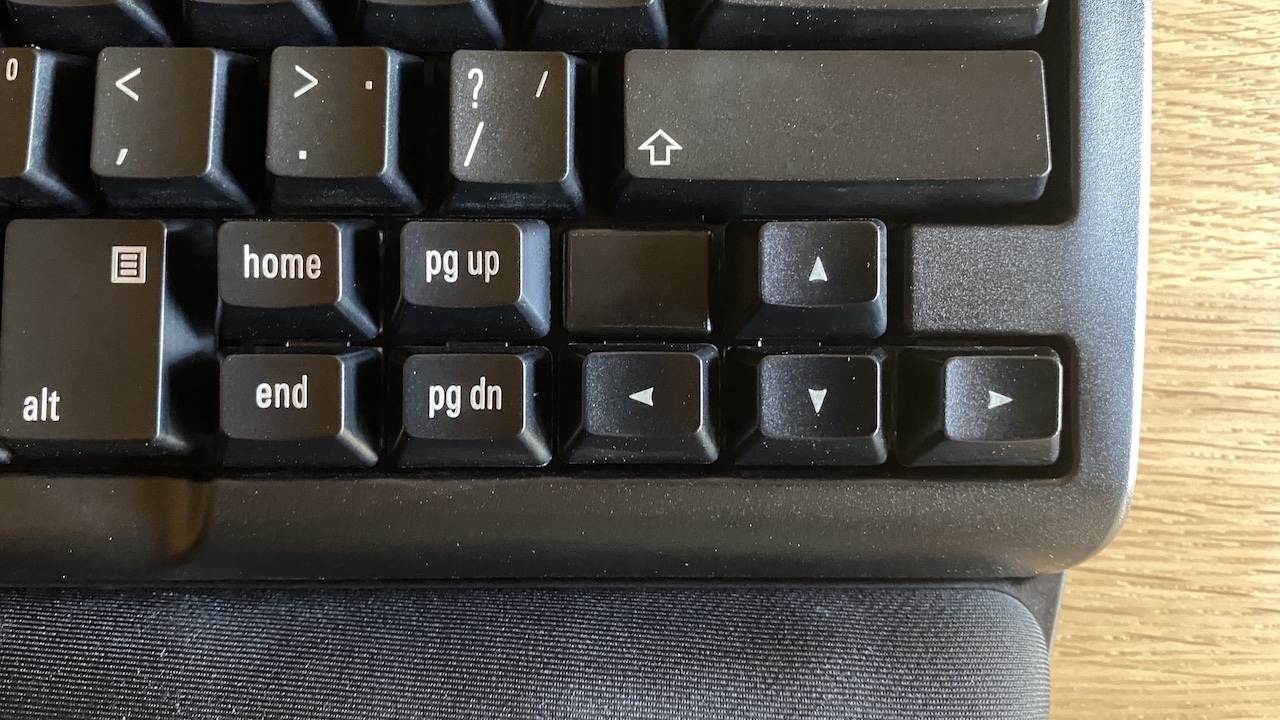 On the right half, Matias has jammed Page Up, Page Down, Home, End, and the cursor arrow keys into the bottom right corner, replacing the right Fn key, the menu key, and right Ctrl. (The menu key is now a shortcut—Fn+Right Alt.) Most tenkeyless keyboards have these keys set off in their own column to the right. Condensing them here dramatically reduces the amount of lateral movement you make with your wrists and fingers, which is a key ergonomic concern.

If you’d rather use the shortcut keys to do something a little more complicated, the four left-side “macro” keys (Undo, Cut, Copy, and Paste) are all remappable. Matias took a conservative approach to adding programmable keys on the Ergo Pro. Only 19 keys can be changed: The four left-hand shortcut keys; a single, blank-capped macro key on the right-hand side; F1 through F12; and the two spacebar keys. That’s less customization than you get from most premium keyboards, but that extra malleability is not something most work-focused users are likely to miss. (Admittedly, full customization is usually a gaming-oriented feature.) 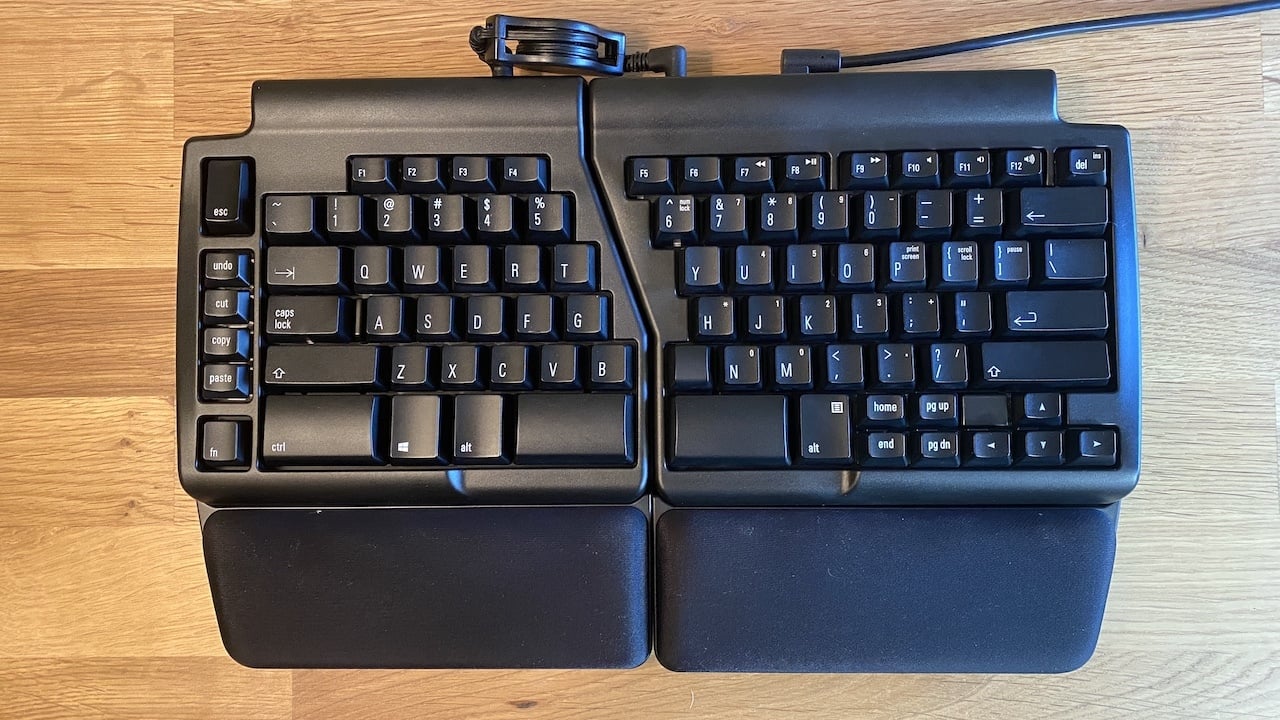 The Ergo Pro does not come with a configuration app, so you set macros manually using a set of programming hotkeys. Setting up and removing a new function is easy: Simply press Escape, plus the key you want to reset. It’s easy to tell when you’re in programming mode, thanks to a blinking light beneath Caps Lock. I’m generally not a fan of software-free key remapping—it’s relatively easy to make a mistake and hard to catch it when you do. Plus, there’s no way to create profiles or rotate macros in and out. This system is as simple and easy to use as any I’ve seen, which is great, but its utility is still limited.

It helps that the Ergo Pro feels comfortable to type on in the traditional sense, as well. Matias makes its own “Quiet Click” switches, a tactile model comparable to Cherry MX Browns. While they aren’t silent, they are relatively quiet and quite comfortable. They require a firm press to actuate, but that’s a good thing, especially for newer users. When switching to an ergo keyboard, especially a split design, you can expect typing speed and accuracy to drop off for a while. Typing quickly and well depends on muscle memory, and a tilted keyboard with new and shifted keys renders that muscle memory obsolete. As a repeat ergo keyboard user, I found I was able to adjust pretty well, but not completely, in five or six days. A new user should expect to spend at least two weeks onboarding. 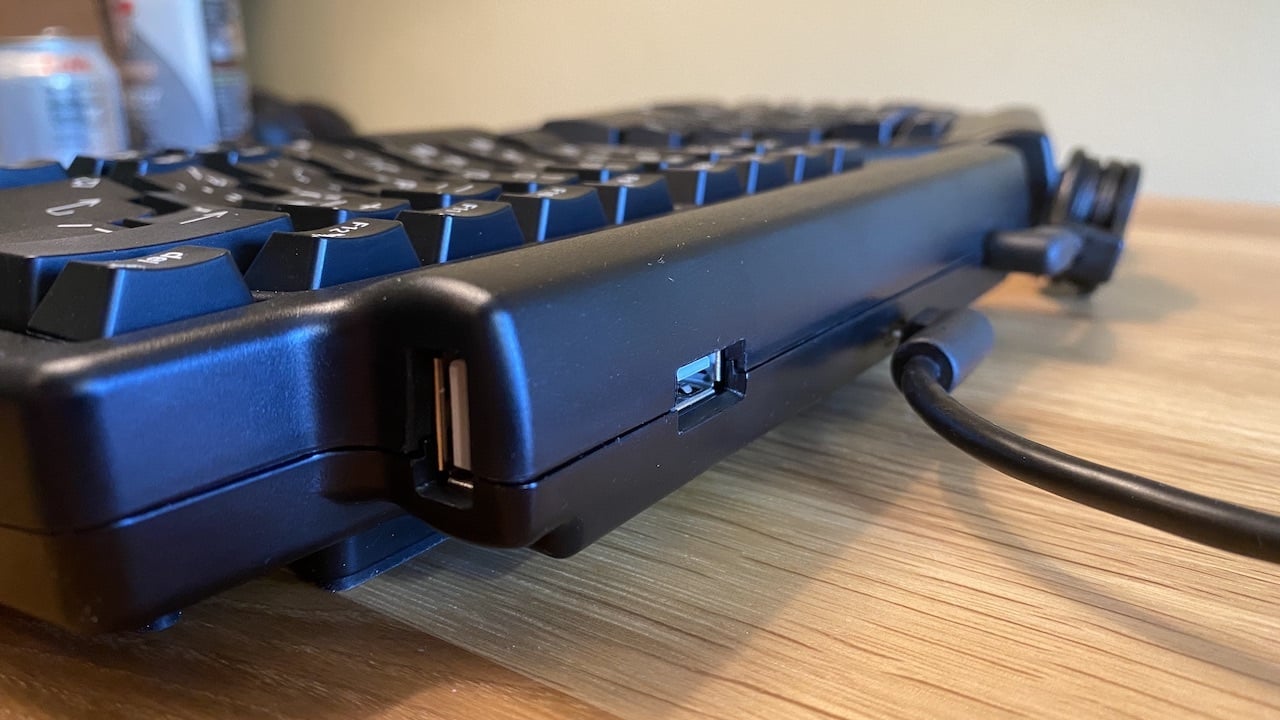 Last but not least, the Ergo Pro’s wildest feature isn’t related to ergonomics at all. Along the far edge of the right-hand keys, you’ll find no fewer than three USB 2.0 pass-through ports. There’s one on the back of the keyboard, near the micro-USB port for the cable that connects to your PC; the other two are at the far corners of the right half, pointing to either side. You don’t need to plug in an extra USB cable on your PC to power these ports (probably because the Ergo Pro doesn’t need extra power for backlighting)—plug in one port on your PC, and you get three in return. It’s an awesome addition: A single USB pass-through port is common but not guaranteed on premium keyboards; two is very rare; and three is all but unheard of.

The Matias Ergo Pro is a very well-made if unassuming split keyboard. It looks generic, but its design defies that expectation and then some. 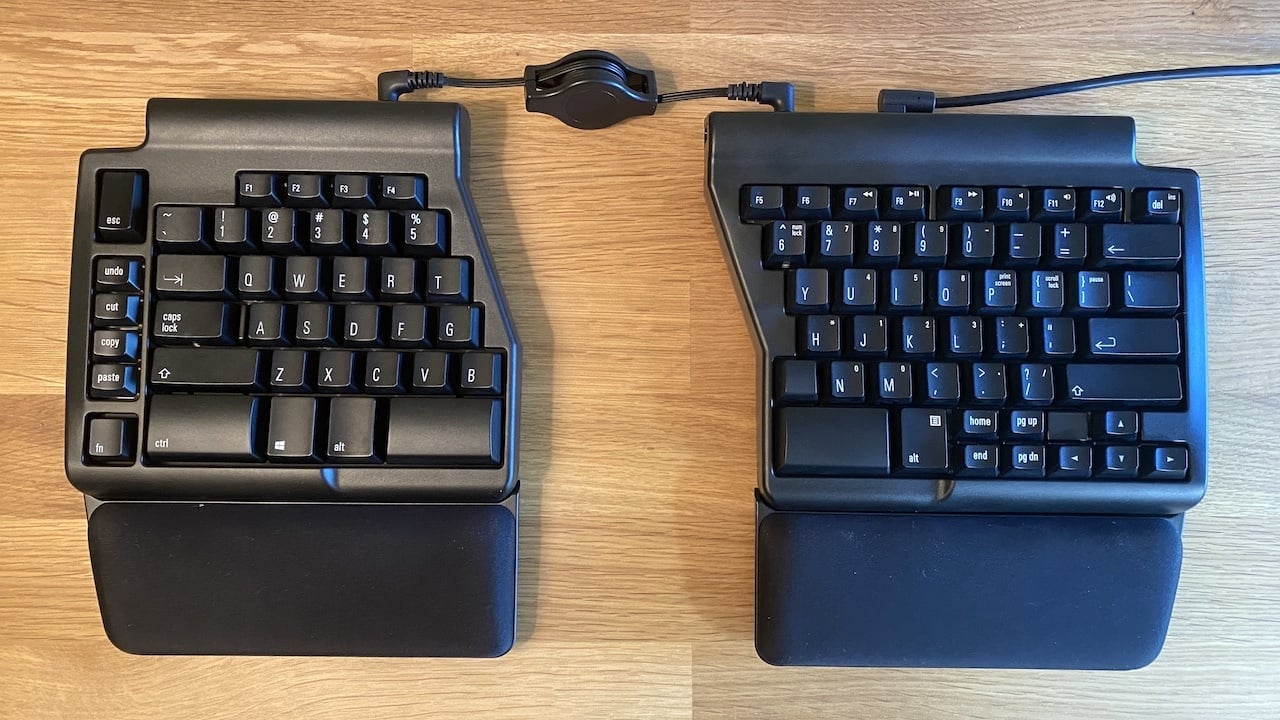 There’s a part of me, though that wished Matias did more to match the features found in conventional premium keyboards. As a productivity-focused device, gaming-style RGB lighting would be out of place, but standard white LED-backlit keys would be nice, as would premium features like dedicated media keys and a volume roller. For a steep $220, it’s not churlish to say that features are missing from a keyboard, even if most split keyboards start between $200 (the price of the non-programmable Matias) and $250.

Still, if you’re in pain or worried about RSIs down the line, a few dollars up or down, in the big picture, shouldn’t matter much versus your comfort and health. The Ergo Pro will let you work hard, without making it hard to work.