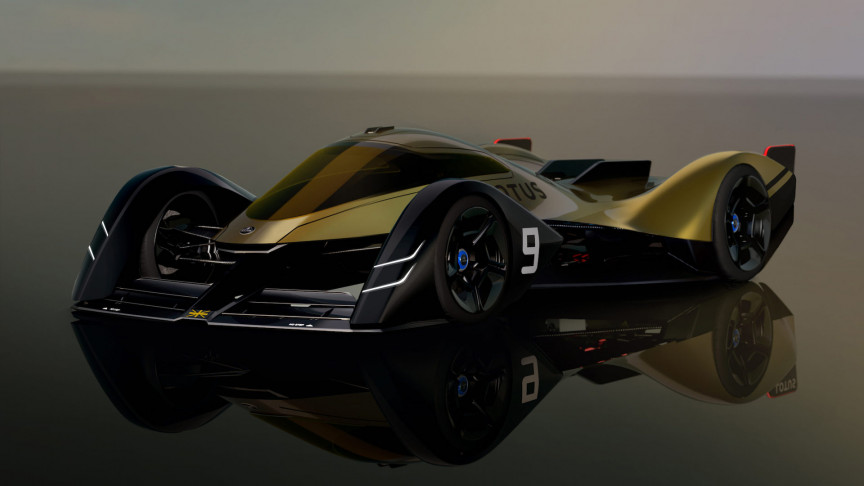 Finished in black and gold as a nod to Lotus’ Formula 1 motorsport heritage, the vehicle could hit the electric race tracks by 2030, the company stated in an accompanying press statement.

The car features “morphing” body panels as well as vertically mounted control surfaces that assist with high-speed cornering. The EV’s sleek canopy bears a striking resemblance to a fighter jet and is mounted in a delta-wing upper body.

In fact, the design results in the E-R9 being “partly driven like a car and partly flown like a jet fighter”, says Richard Hill, chief aerodynamicist at Lotus.

The E-R9 was developed by Lotus’ Engineering division, which delivers projects for external clients: the concept is a showcase for the division’s design philosophy and innovative spirit in the fields of electric powertrains and aerodynamics.

E-R stands for ‘endurance racer’, while the 9 is a tribute to the company’s MkIX, the car Lotus used for its debut at the Le Mans 24 Hours in 1955.

“What we’ve tried to do is to push the boundaries of where we are technically today and extrapolate into the future,” Richard Hill explains. “The Lotus E-R9 incorporates technologies which we fully expect to develop and be practical. Lotus has an amazing history of developing unique solutions, and we’ve done it many times in motorsport and with our road cars.”

Perhaps the most important innovation for the E-R9 is represented by the vehicle’s “morphing” panels. The feature — which can be triggered manually by the driver or set to adapt automatically via sensors — allows the car’s delta-wing profile to change shape so as to deliver minimum drag on straights and maximum downforce at corners.

Each of the E-R9’s wheels is powered independently by its own electric drivetrain via a manually controllable system that is enhanced with torque-vectoring. The feature is inspired by technology already available on the Lotus Evija electric hypercar.

“Battery energy density and power density are developing significantly year on year,” explains Louis Kerr, vehicle architect at Lotus. “Before 2030, we’ll have mixed cell chemistry batteries that give the best of both worlds, as well as the ability to ‘hot-swap’ batteries during pitstops.”

As AutoSport points out, the presentation of the E-R9 comes hot on the heels of Group Lotus and Renault’s Alpine announcing that they will co-operate on a potential future team entry for Formula E.

Formula 1, meanwhile, aims to crank up the production of more sustainable engines in a bid to prevent it from being left behind by the innovations increasingly showcased on the Formula E race circuits.