Living with a Galaxy XCover Pro 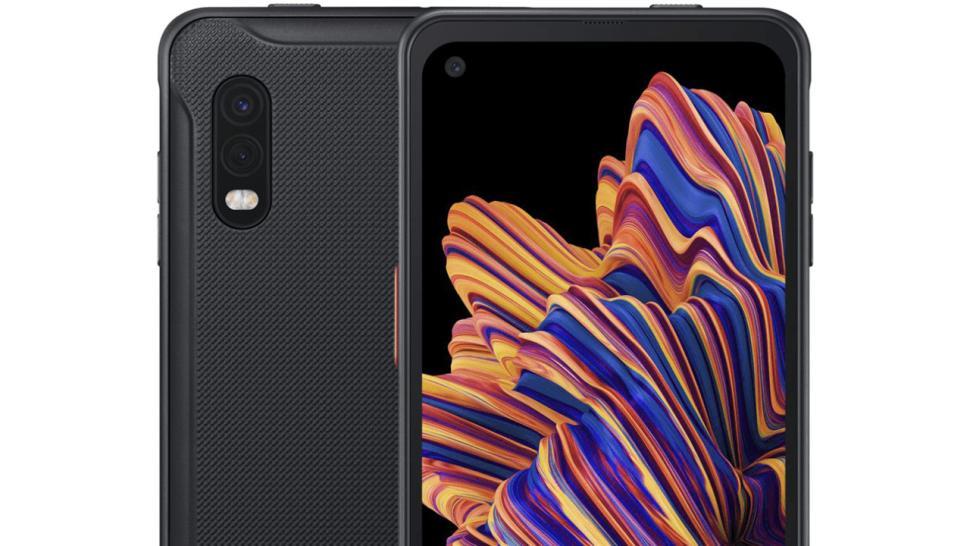 I’m not the target audience for Samsung’s Galaxy XCover Pro. The ruggedized phone is really aimed at frontline workers, ranging from retail store employees to outdoor workers. While it’s not the kind of phone you’re likely to buy for yourself, it fills an important niche for organizations that need devices that will get a lot of use, particularly in challenging environments.

When you look at XCover Pro, it looks pretty much like a standard modern Android phone, with a 6.3-inch AMOLED FHD+ (1080-by-2340 pixel) screen that takes up the large majority of the front, with no buttons and what Samsung calls an “infinity” display with a little cut out in the upper left hand corner for the front facing camera.

It measures 6.30 x 3.02 x 0.39 inches (HWD) and weighs 7.7 ounces (218 g), making it a bit wider and thicker than the smallest Galaxy S20 phone with its 6.2-inch screen (think of it as having a rugged case built in) but about the same width and weight as the Galaxy S20 Ultra (with its much larger 6.9-inch screen). There is software for one-handed use which shrinks the display to a corner of the screen, but for general tasks, you’ll probably want to stick with two-handed operation.

It feels very solid, with ruggedized material surrounding the phone, and Corning Gorilla Glass 5 to protect the screen. It is certified to military spec MIL-STD-810G1 and rated IP-68, meaning it should be sand, dust, and dirt resistant, and theoretically capable of surviving 30 minutes in 1.5 meters of water. (Note though, that the main Galaxy S and Note line is also rated IP-68). It is meant to withstand drops from 1.5 meters, though of course none of this is covered by the warranty.

Samsung says it is designed for extreme weather conditions including high altitude or humidity. The phone is also equipped with a “glove mode” so you can use it in rain or snow while wearing gloves. I wasn’t able to test it in any of these environments other than rain, but it worked just fine.

The phone is powered by a Samsung Exynos 9611 processor with four 2.3GHz ARM Cortex-A-73 cores and four 1.7GHz ARM Cortex-A53 cores and Mali-G72 graphics. The unit I used had 4GB of RAM and 64 GB. You can add a microSD card up to expand storage to 512 GB. In use, it will feel very familiar to anyone who has used a Samsung (or indeed, any Android) phone in the past few years. It runs Android 10 with the Samsung One UI 2, a fairly unobtrusive skin.

The XCover Pro has a couple of features you don’t see much in phones these days that I really like. It has a removable back so you can get to the replaceable 4050 mAh battery, dual SIM card slots and microSD card. It has a traditional headphone jack. Generally, I found the battery life to be quite good – more than good enough to get through a normal day. In a field-use situation, you might need more, so the removable battery and support for both fast charging through the USB-C port (with a 15-watt charger included) or via Pogo charging makes sense.

It has two programmable buttons. A large one on the left side is designed to be used for push-to-talk applications – essentially setting it up as a walkie-talkie. This is really important in applications with a dispatcher or anywhere where a worker regularly needs to keep in touch with a central office and doesn’t want to launch an application or unlock the device to do so. In the US, the Verizon version of the phone, which I tried, comes pre-installed with Verizon PTT, which lets you have up to 250 people in each talking group. Samsung and Microsoft also sell an unlocked version, and Samsung promises to integrate Microsoft Teams later this year.

A second programmable button is on the top and can be used with any application, and you can choose to allow this when the phone is locked. There are a number of APIs for connecting to scanning software, and it’s designed to work well with things such as bar code scanning for retail inventory or (with a sled and a card reader) for point-of-sale. Since I don’t have such an application, I mapped it to launch the camera app.

Speaking of the camera, it has two rear-facing cameras—an 8-megapixel ultrawide version and a 25-megapixel main camera—and a 13-megapixel front-facing one. These work fine, but they don’t at all match up to the cameras in premium or flagship phones. The rear-facing camera is capable of a 4.0x zoom and FHD (1920-by 1080) video resolution (though it can also do 2336-by-1080 or 1440-by-1440 video) and includes some video stabilization.

The camera application is similar to what you’d find on a Galaxy S phone, with the main menu giving you just live focus, photo and video, plus a More choice that brings you to a screen with the other common options: slow motion (240 fps), super low motion (960 fps), hyperlapse, night mode and pro. I didn’t find the night mode to be as good as on the latest higher-end cameras, otherwise both videos and still photography looked perfectly fine. Still, the pictures aren’t quite as good as in the newer phones, but I can certainly see cases where a better zoom in particularly would be nice for the intended audience. It’s a testament to how far phone cameras have come in past few years that this now seems a bit outdated.

The phone offers face recognition, but that isn’t considered particularly secure. It also has a fingerprint reader integrated into the power button on the right side, just below volume keys. I found the fingerprint reader worked fine, but often the phone simply wanted me to enter the PIN.

With a list price of $499, the Galaxy XCover Pro is well priced, much less than today’s flagship phones, but with a decent amount of power. Still, most consumers will likely choose a higher-end phone with more processing power and better cameras; or a less expensive device. The XCover Pro makes the most sense for enterprise buyers who are looking to outfit a fleet of workers with a rugged device that is still very familiar, easy to carry, and powerful enough – and one that has special features like Pogo Charging and the dedicated PTT button.