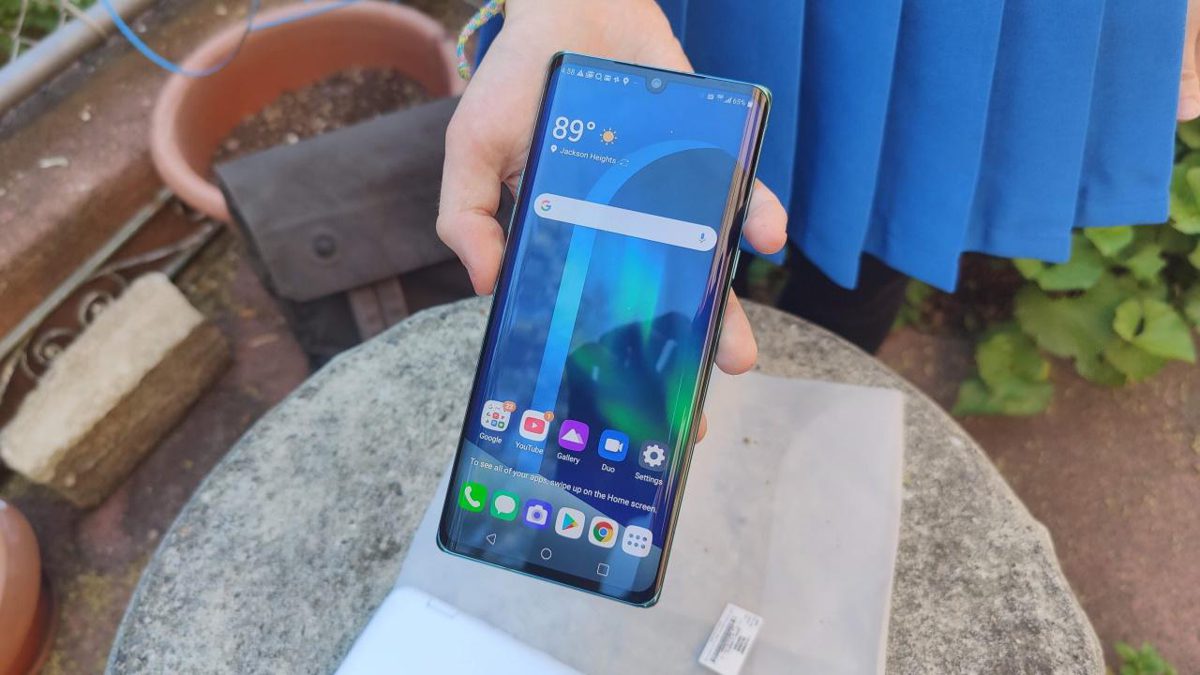 Once the reliable third-place smartphone company in the US, LG has struggled to find its feet in recent years. The company hasn’t gotten much credit for the innovations it’s brought in, like wide-angle cameras and high-quality audio, and it’s received a lot of side-eye for oddball features like a veer into modularity with the LG G5 and, more recently, its dual-screen case strategy. According to the company, its latest phone, the midrange LG Velvet, ushers in “era of new elegance” with a move to a far more liquid look—wide, flat, tapered, and shimmery. It’s undoubtedly gorgeous, but LG needs to get price right if it hopes to recapture the public’s interest. We’re taking a first look at the phone ahead of its availability in the US.

As promised, the Velvet is a new design language for LG. It’s bigger, more tapered, and it feels more modern than the G series, with its three cameras and flash in a vertical series of circles down the shimmery green back panel. The front glass is severely curved at the edges, coming to pinched sides, but the bottom still has room for a 3.5mm headphone jack. The whole approach is a little Samsung, a little Sony.

The gorgeous, shimmery back panel is one of the Velvet’s selling points

The 6.8-inch, 2,460-by-1,080 screen is gorgeous, and bright enough to see in sunlight. LG plays around with the screen’s amped-up colors by throwing a lot of translucency into the UI, so your experience with the Velvet feels like it involves a lot of shifting clouds of color; it’s all very pretty.

The in-display fingerprint sensor works well. I wasn’t frustrated by it, and I like how the UI gives you a nice big touch target on the lock screen. 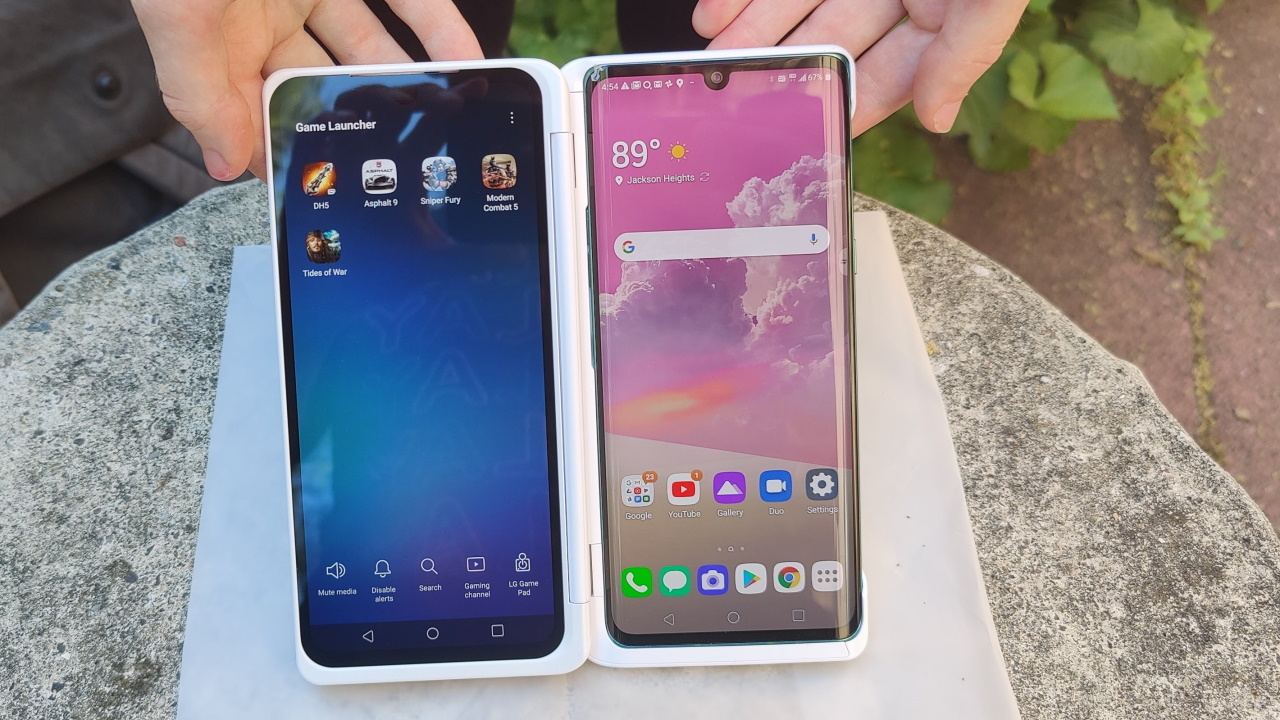 The phone works with LG’s dual-screen case, and LG sent me one with the Velvet. The case protects the phone and offers an entire second screen, to the left of the main screen, which you can multitask applications on. It’s kind of clumsy. As my colleague Steven Winkelman said in his LG V60 review: “The Second Display Case is great in theory, but after using it on the V60 and the G8X, it’s hard to see its utility. It makes the phone much bulkier, and seriously takes a toll on battery life. And if you’re annoyed with the crease in folding phones, it’s a near guarantee you’ll never get used to seeing a giant bezel in the middle of apps in Wide View mode.” 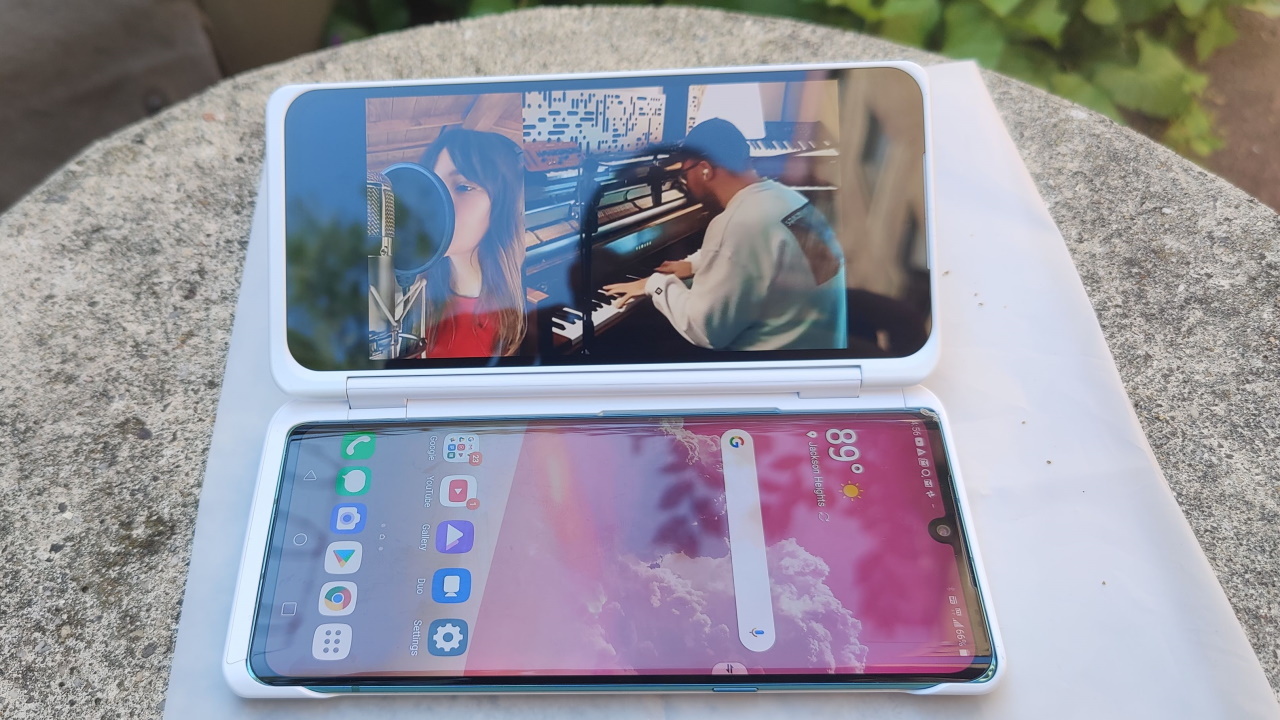 The Velvet also works with an active stylus, like the Samsung Galaxy Note series does, but one wasn’t included with my review unit so I couldn’t test that function. The phone doesn’t include a place to store the stylus, unlike the Galaxy Note.

In addition to not knowing the price, I’m not yet rating the LG Velvet because the Korean model I received for testing is very different from the US version in terms of radio and software.

When it comes to the radio, this phone lacks T-Mobile’s band 71 and any US 5G bands. LG tends to make custom versions of its phones for every US carrier, and this one will probably be no different, with various carrier models rather than a universal, unlocked phone. The fact that this model doesn’t have a US radio means we’re going to have to wait for call quality results, too.

In terms of software, the phone has a Korean-language-only AI assistant called Qstory, LG’s own payment system, and a perpetual alert notice telling me not to remove the phone’s battery. The phone’s battery is not removable, making that one even weirder. I assume all of that will get fixed and changed in the US model. 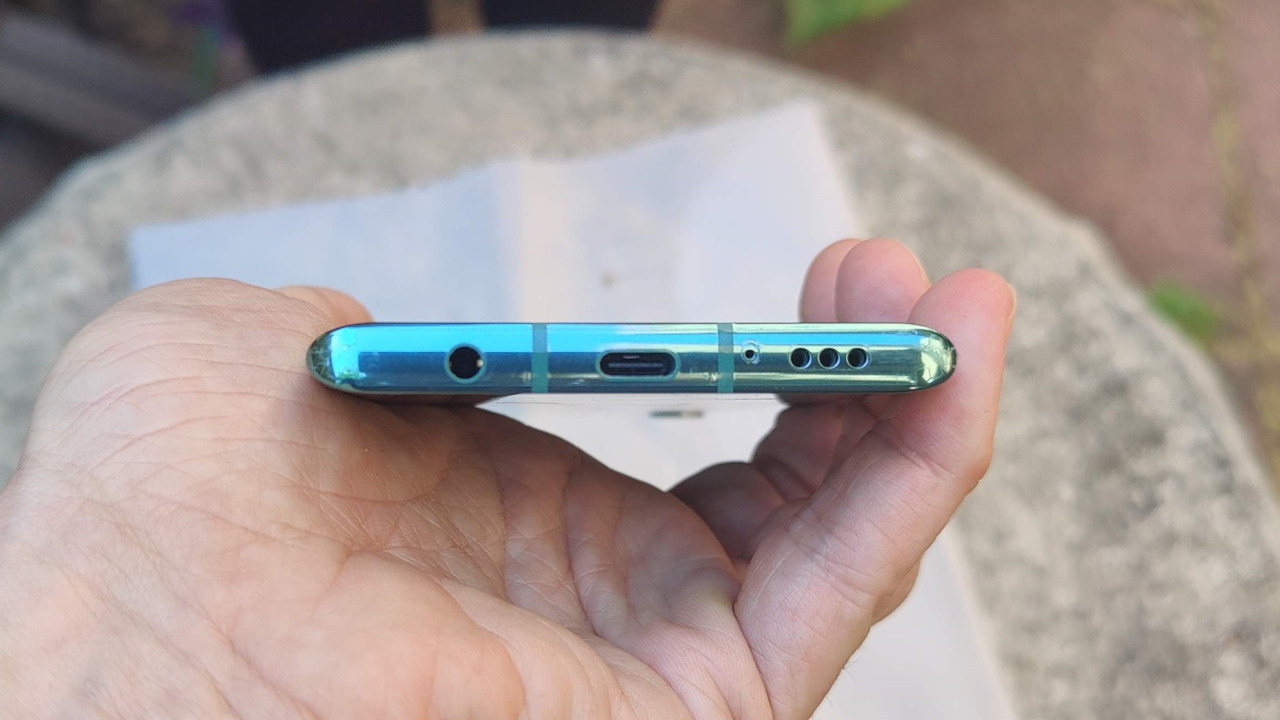 LG has always had a niche in high-quality audio, and the Velvet lives up to that legacy. For one thing, this phone has a 3.5mm headphone jack. You can’t assume that on phones any longer; the Samsung Galaxy A71 has one, but the OnePlus 8 doesn’t. The Velvet doesn’t appear to have the distinct quad DAC that older LG phones have, but sound through the headphone jack is rich and gorgeous.

I was impressed by the High-Quality Bluetooth option, which lets you toggle the Apt-X Lossless codec to trade between super-high-quality audio and better error correction. The video camera mode, meanwhile, has the now-trendy audio zoom, which focuses in on conversations when you zoom your camera in. The full audio package really satisfies.

The phone has a 48MP main camera that mostly takes 12MP photos, but can simulate a 2x zoom; an 8MP ultra-wide camera; a 16MP front-facing camera; and a 5MP depth sensor for bokeh and the like. Colors in the shots I took felt super punchy, similar to the Velvet’s glowing OLED screen.

I took photos outside on a blazingly sunny day, and they’re wonderfully sharp. But that’s never a real test for decent mobile phone cameras these days; it’s table stakes. 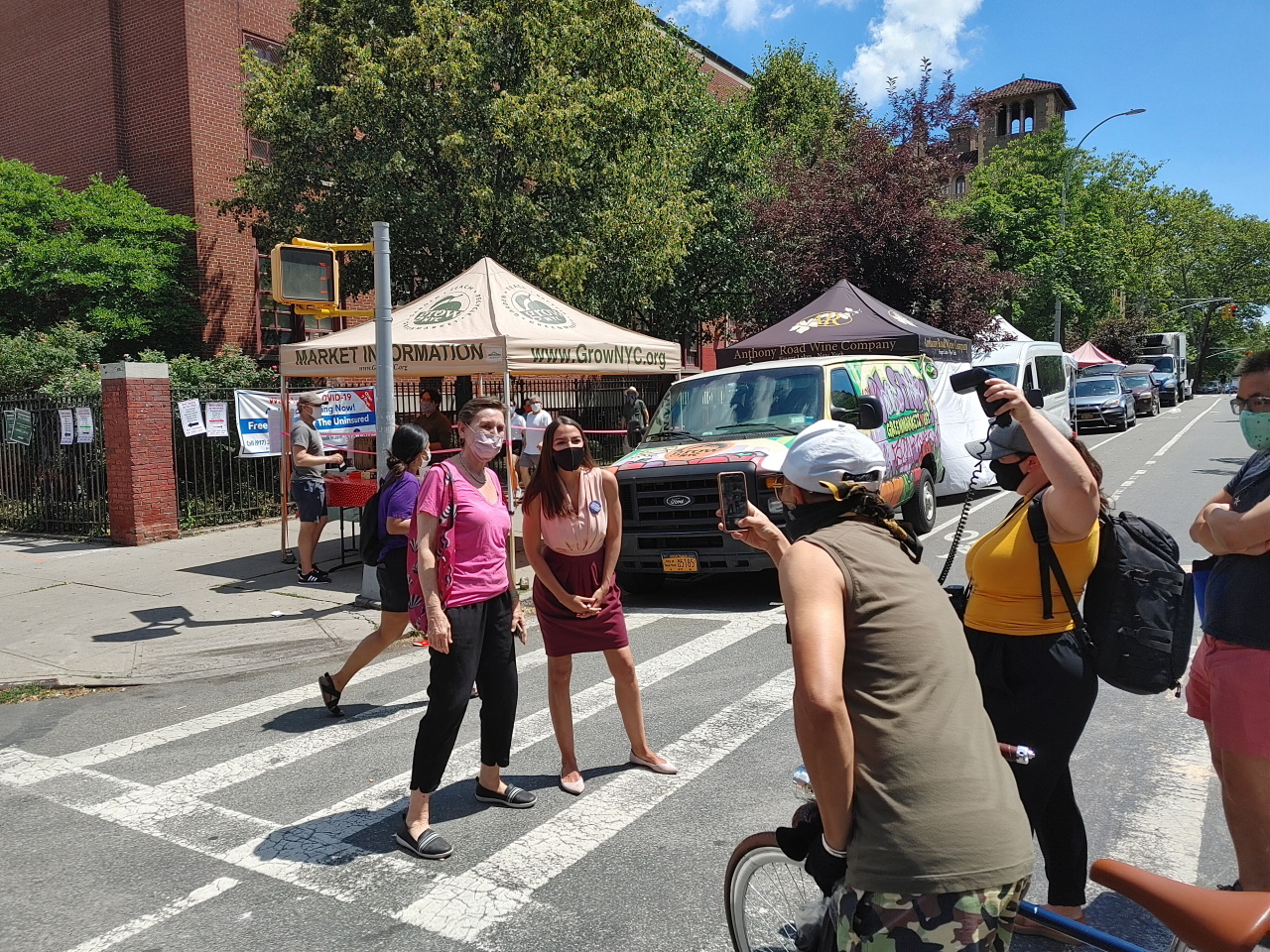 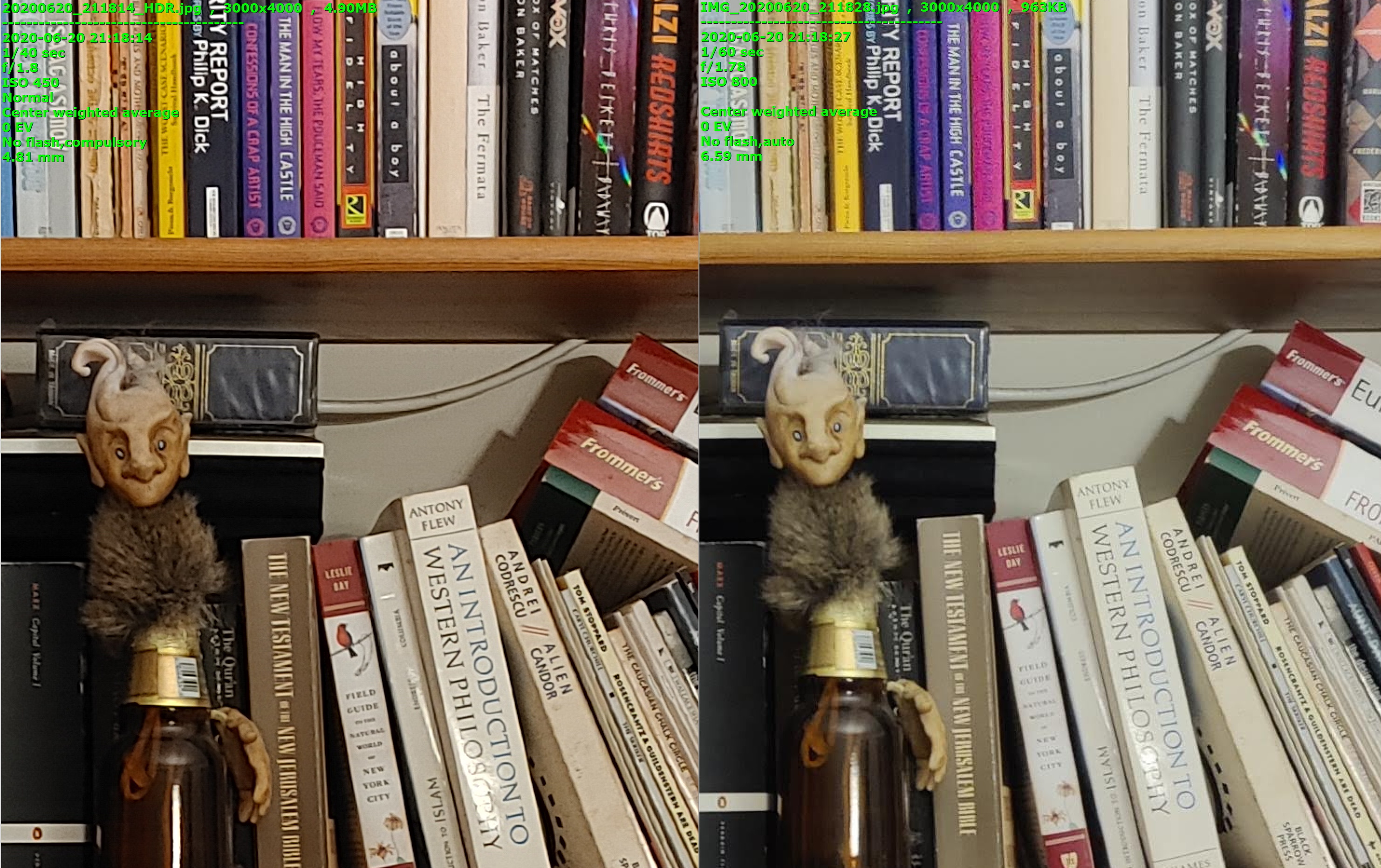 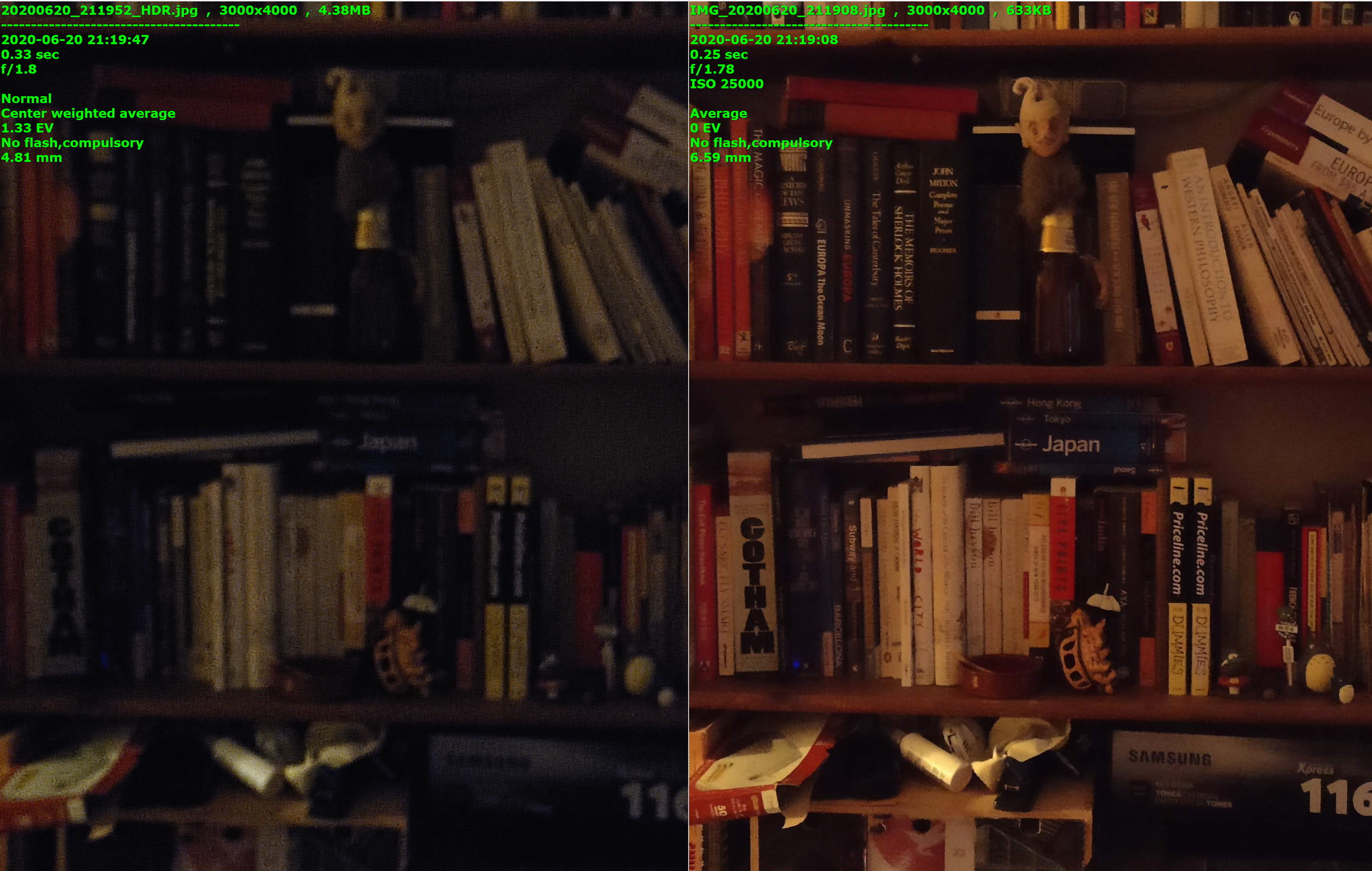 Look closer at indoor shots, and they don’t measure up to the finest cameras on the market. I compared the Velvet primarily with a OnePlus 8 Pro. At 2x zoom with moderate indoor light, the Velvet’s pictures are significantly noisier than the OnePlus shots. The Velvet’s 0.5x wide-angle is a little softer than the OnePlus’ 0.6x. And the OnePlus night mode, powered by a beefier AI engine on its Snapdragon 865 processor, is much better than the Velvet’s. 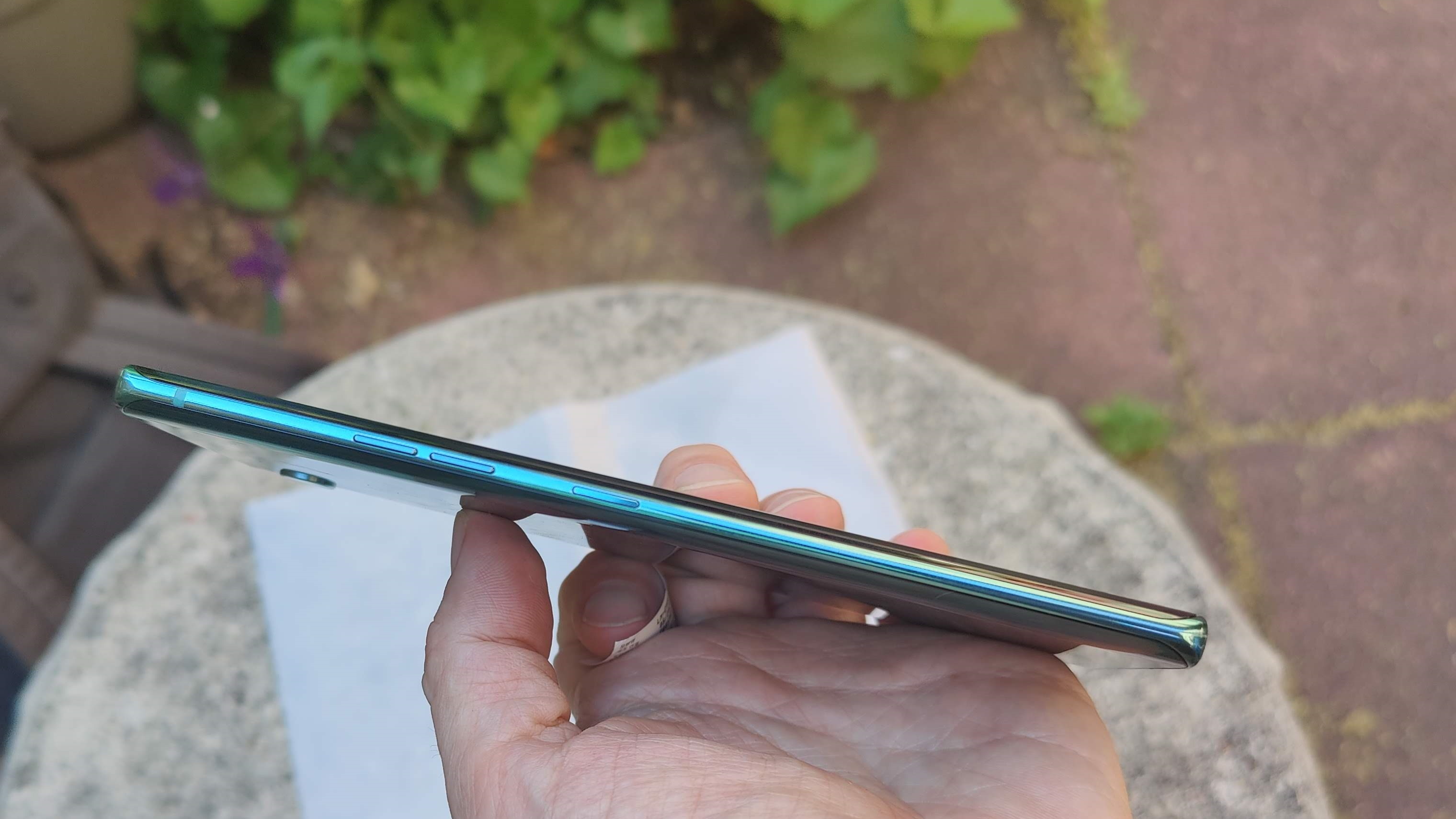 The Velvet is heavily tapered on the sides, coming to a near point

The Velvet is the first Qualcomm Snapdragon 765 phone I’ve personally tested. It’ll probably be the second mainstream one in the US, after the Samsung Galaxy A71. I’m not deeply moved by its performance on benchmarks. The 765 is billed as a midrange-to-high-end chip, not a flagship, and it delivers what’s promised, no more.

The phone runs a highly LG-modified version of Android 10, which is likely in the US to become a more carrier-modified version. There are a few good touches in terms of colorful, translucent backgrounds and a shifting image on the lock screen, and I’m not too offended by LG’s included bloatware. It has a high-quality voice recorder, a memo pad program, a fitness tracker, and a bunch of sample dual-screen games, all of which can be uninstalled.

I got 8061 on the PCMark Work benchmark, as well as 583 single-core and 1876 multi-core on the Geekbench benchmark. This outpaces the Motorola Razr with its Snapdragon 710, but doesn’t measure up to phones with Snapdragon 855 and 865 chips. In daily usage, I mostly felt the difference in the camera UI and features. The phone seems a little slower to snap HDR shots than the 865-based OnePlus 8 Pro, as well as slightly slower to switch between its 1x, 2x, and 0.5x lens modes.

The Velvet got 19fps on the GFXBench Car Chase Offscreen benchmark and 86fps on the T-Rex Offscreen benchmark, which doesn’t measure up even to last year’s 855 chip (29fps and 115fps on the LG V50). That said, it’s far better than the Snapdragon 710 in the Motorola Razr (13fps and 66fps).

Battery life is good. I got ten and a half hours of video playback with the screen on full brightness, although I could tell that the phone spent a good half of that in a low-power mode, so you’ll get less battery life if you’re gaming. The second-screen attachment will also draw a significant amount of power, of course. 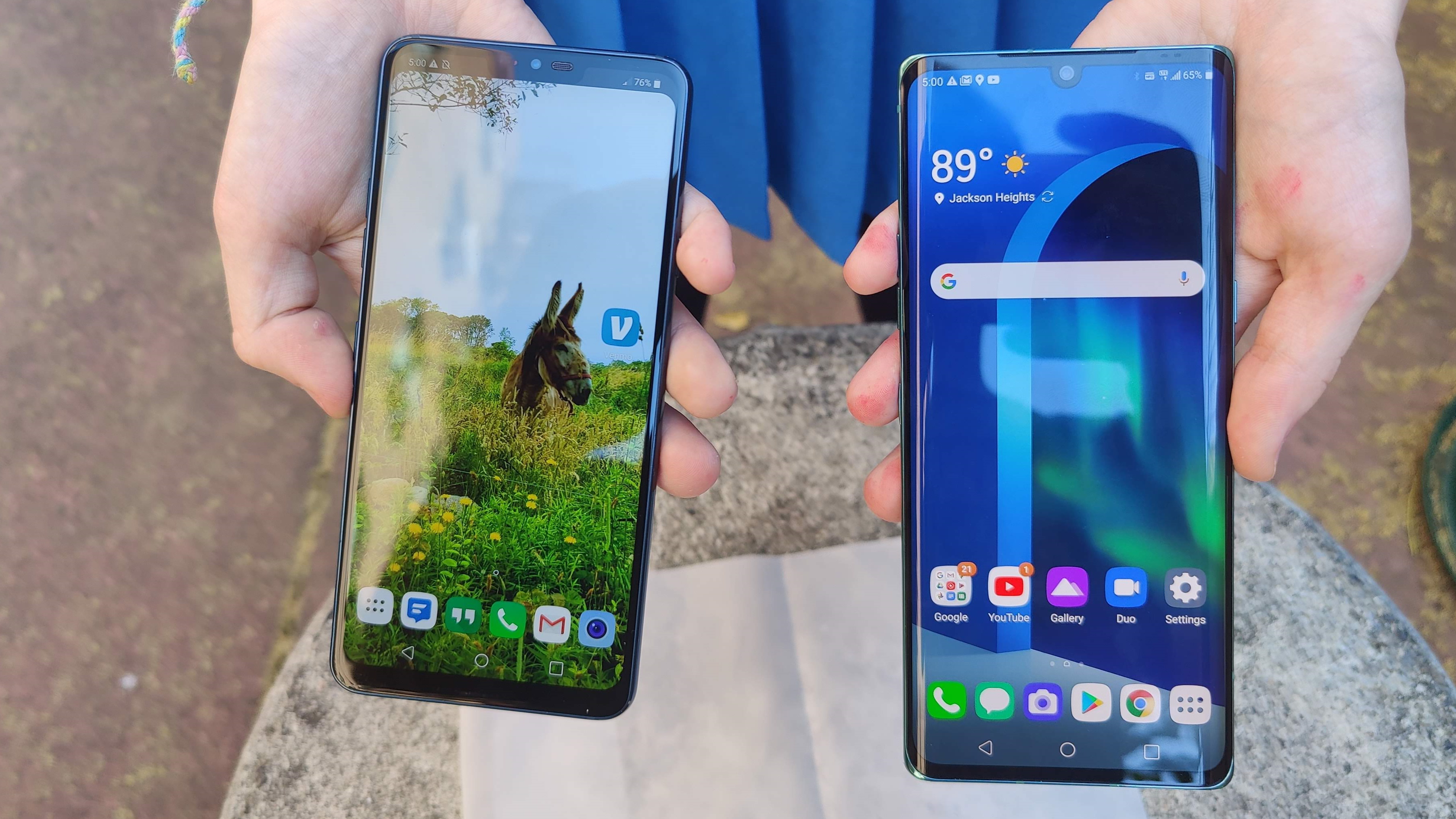 Compared with the LG G7 (left), the Velvet (right) is an entirely new look

It Comes Down to Price

Ultimately, the Velvet’s most important feature is going to be one that LG hasn’t told us about yet: price. LG needs to take itself down a notch and understand that it’s now a bit of an underdog brand, and that it needs to start charging an underdog price. When we looked at the LG V60, it was a good phone that cost too much, at $900.

That leaves the LG Velvet falling back on LG’s core audio audience. It’s great that the phone has excellent Bluetooth sound quality, top-notch sound recording, and a regular 3.5mm headphone jack, even if it doesn’t have the proprietary quad DAC that LG used to pride itself on. But with Chinese manufacturers like TCL coming from below, and Apple and Samsung with solid positions above in the market, it’ll take more than good sound and a strong design for the Velvet to make a splash.