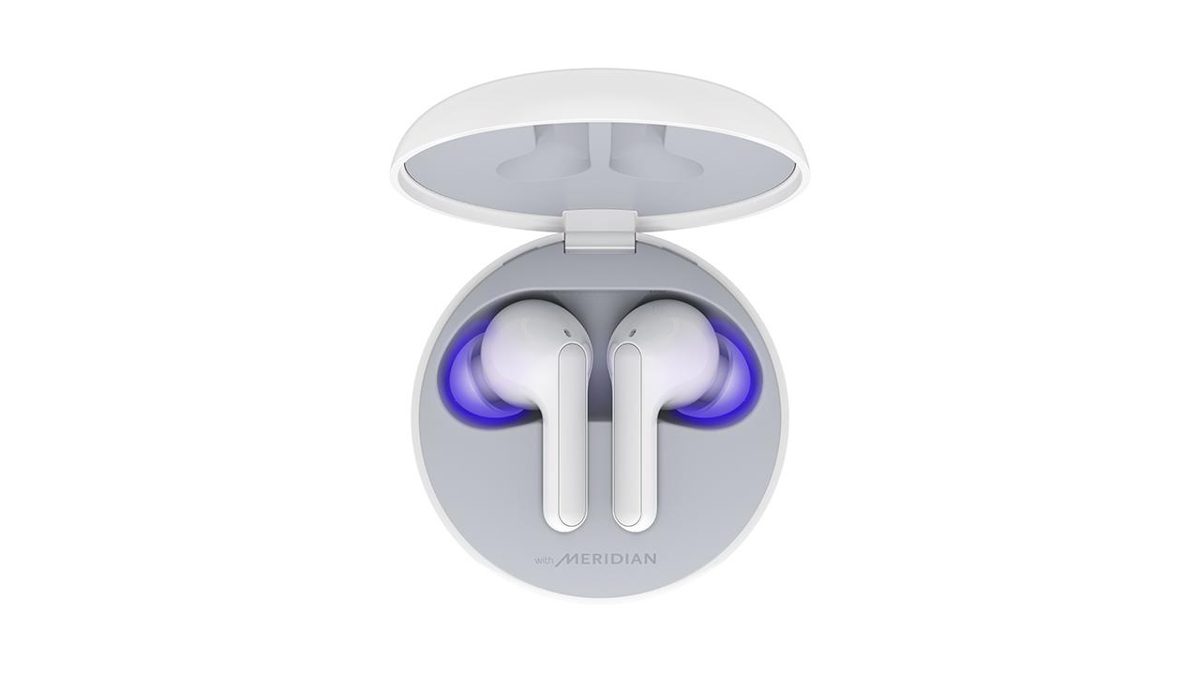 The LG Tone Free HBS-FN6 are simple, stylish true wireless earphones. At $150, they’re priced to compete with many of our favorites in the category, and offer some unique selling points, such as a UVnano case that kills germs on the earpieces while they recharge. The drivers can reproduce some serious bass depth, but they’re at the mercy of a sound signature that doesn’t highlight their strengths by default. Thankfully, a companion app has customizable EQ so you can tailor the audio to your liking and coax the best out of the drivers. That said, this is a very crowded field, and when it comes to audio performance, these in-ears don’t quite stand out.

Available in black or white models, the Tone Free HBS-FN6 earpieces are AirPod-like stems with capacitive touch controls on each ear. They ship with three pairs of hypoallergenic silicone eartips (in S, M, and L), and the fit is quite secure.

A USB-C charging cable of generous length is included and connects to the back of the small, circular charging case. The case has a flip-up lid and internal blue “mood lighting” (the manual’s wording). The interior is also armed with UVnano technology to kill germs while the earphones charge—a unique feature indeed.

An IPX4 rating is decent, but not impressive. It means the earpieces can withstand light splashes and perhaps a wipe-down with a damp cloth, but exposing them to heavy rain or pressure from a faucet could spell trouble.

The on-ear controls are responsive, and are sensibly divided ear to ear. (You can also change what’s assigned to each ear in the app.) In default mode, a single tap on either ear plays/pauses/answers or ends calls. A double tap on the left ear lowers volume or raises it on the right. A triple tap on either skips forward a track, but you can assign the left to navigate backward. A long press enters or exits Ambient listening mode, which can be controlled with a fader in the app to mix in the sounds of your surroundings, allowing for easy conversation without removing the earpieces.

The LG Tone Free app is available for Android and iOS devices. In addition to the Ambient Sound fader, the app has multiple EQ presets designed by Meridian (the British luxury audio manufacturer), as well as user-customizable EQ presets with eight bands available to boost or cut, and then save. The earphones are compatible with Bluetooth 5.0 and support AAC and SBC codecs.

LG estimates battery life to be roughly 6 hours, with 12 additional hours of charge in the case, but your results will vary with your volume levels.

For our audio testing, we switched the earphones to a user-customizable EQ preset, then set all eight bands to zero for the flattest response possible. We also tested using various EQ presets, like Bass Boost and Natural. Bass Boost sounds…odd. The bass is boosted, as is the treble, but Meridian is also doing something with the stereo image here—there are perhaps spatial effects being added. The same goes for Immersive mode. You might hear it a little bit on certain songs, while it can completely change the mix on others. Except for perhaps Natural mode, none of these modes sound realistic. 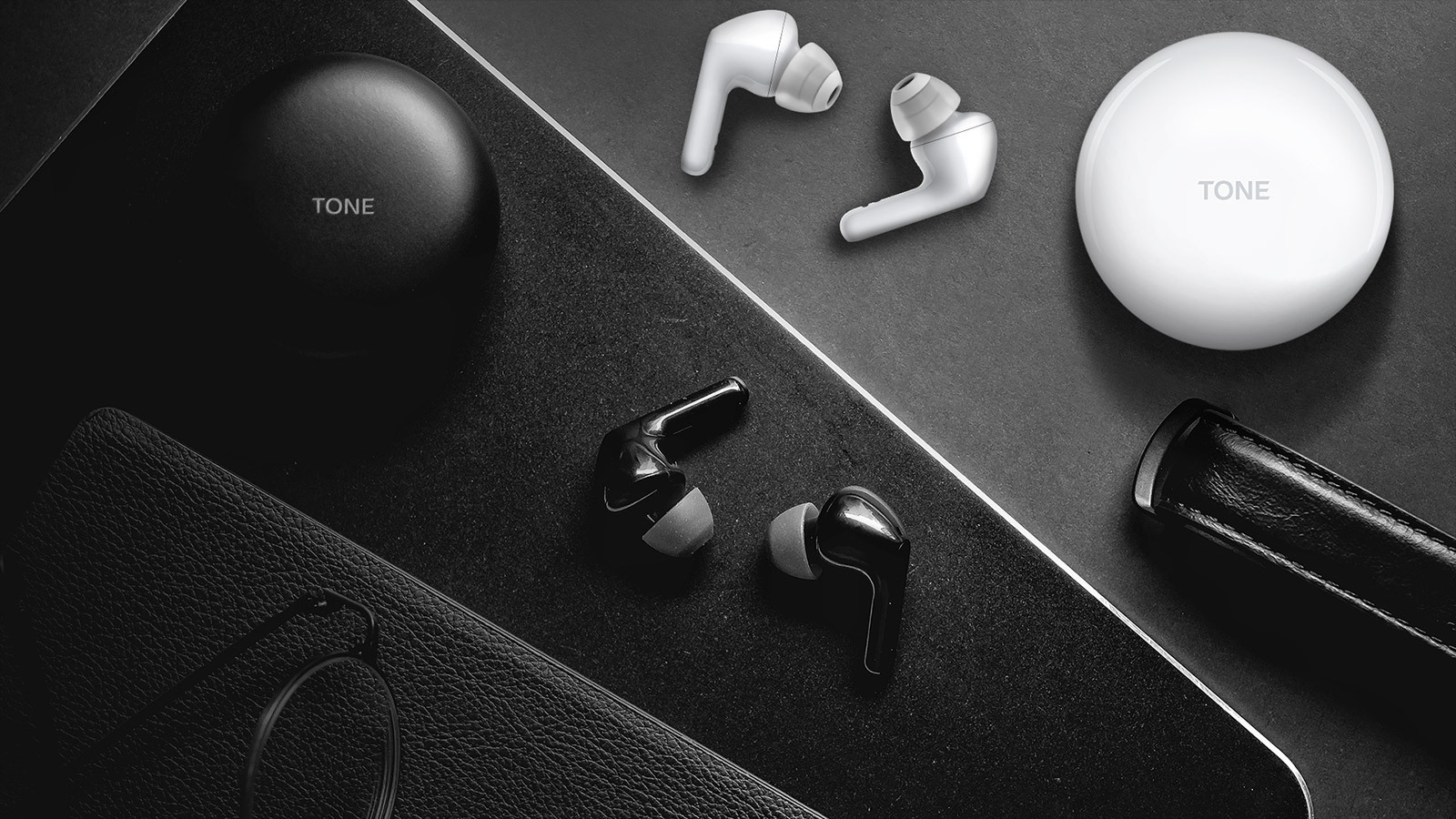 What’s odd is how wildly different Natural mode sounds from the flat default preset you get with all of the EQ faders set at zero. In this case the mix sounds muffled compared with the Natural preset, so no matter what, to get the best out of the drivers, you need to mess around with the EQ a little.

Bill Callahan’s “Drover,” a track with far less deep bass in the mix, gives us a better sense of the Tone Free HBS-FN6’s general sound signature. With no bass boosted, the drums on this track sound relatively tame—not thin, but certainly not thunderous. Callahan’s baritone vocals have some added low-mid richness, but there’s also plenty of high-mid presence. Generally speaking, this is a balanced sound signature, giving as much attention to brighter elements like the acoustic strums as the lower-register aspects of the mix, with perhaps a lean toward the lows without things getting intensely bass-forward. The highs are notably boosted, so the tape hiss and bright percussive hits take a slight step forward in the mix.

On Jay-Z and Kanye West’s “No Church in the Wild,” the kick drum loop receives less high-mid presence than we’re used to hearing, dampening the punchiness of its attack. The vinyl crackle and hiss in the background steps forward, however, so there’s definitely some pinpoint sculpting happening in the highs. The sub-bass synth hits that punctuate the beat are delivered with solid thump in flat mode. Switching to Bass Boost mode does so many ridiculous things to this mix, it’s odd that it’s simply called Bass Boost. And the bass actually sounds better with it off, even if you like some extra low-end.

Orchestral tracks, like the opening scene from John Adams’ The Gospel According to the Other Mary, sound a bit bass-boosted and muffled in flat mode. This seems to be a trend across the board, so my recommendation is to make a custom EQ preset in the app that boosts the high-mids a bit, and the deep bass if you want some extra sub-bass sound. Ultimately, no matter what mode you’re in, there’s plenty of DSP (digital signal processing) happening, and tweaking things in one of the non-Meridian EQ presets is your best bet for getting a somewhat realistic-sounding mix. The drivers are certainly capable of delivering deep bass and crisp highs and various blends in between—it’s just up to you to make it happen.

The mic offers average intelligibility. Using the Voice Memos app on an iPhone 8, we could understand every word we recorded, but there was typical Bluetooth distortion adding fuzz to the edges of words, and the mic signal sounded a little faint. This is typical of true wireless in-ear mics, and while it may not be a selling point, the mic clarity is good enough for phone calls.

For the price, LG’s Tone Free HBS-FN6 earphones offer an elegant design and some unique features, notably a germ-killing charging case. But the audio experience is a little strange, with presets that often sound a bit off, and a default sound signature that isn’t ideal. Some EQ tweaks can achieve much better audio performance, but it requires some work on your end. For a similar price, we prefer the sound of the $150 JBL UA True Wireless Flash and the $180 Jaybird Vista, both of which are also fully waterproof. For more money, we like the $200 Jabra Elite Active 75t, while Anker’s Soundcore Liberty Air earphones deliver no frills but solid audio for just $80.