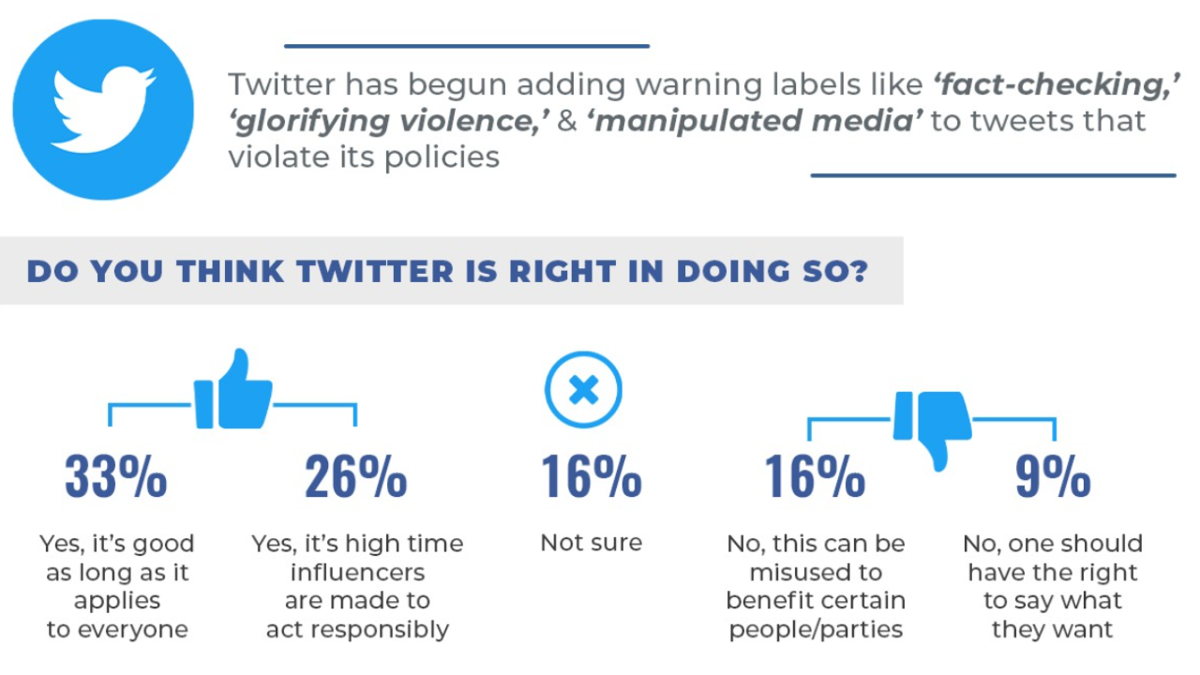 Before everyone gets their feathers ruffled, this is a story about two social media giants and their differing styles. It’s not about the politics (though, really, what isn’t about politics these days?). Piplsay, a consumer insights analysis firm, simply wanted to know what people think of the approach to labeling problematic posts now taken by Twitter and Facebook, the two 800-pound gorillas of social media. It released survey results in a June 9th report, via infographic (below).

The background you probably don’t need: Twitter decided in May to start applying labels to tweets that could use a little more rigorous fact-checking and/or that incite violence. A couple of those labels were stuck on tweets made by the commander-in-chief himself. (The aftermath is ongoing.) Facebook took another approach and said it wouldn’t do that, ever, and gave Twitter a lot of flack for trying to be the “arbiter of truth.” (The aftermath of that is also playing out, at least internally at Facebook.)

So which company got it right? Piplsay talked to 20,313 Americans ages18 and older via Market Cube over the weekend of June 6 and 7, 2020, to find out. First question: is Twitter right? 33 percent said yes, if the labeling program applies to all, and another 26 said yes, especially if the labels are used on “influencers.” Combined, that’s a 59 percent majority of people saying yes.

In both cases, plenty of people had no opinion or weren’t sure yet how it should go—16 percent on Twitter’s actions and 22 percent on Facebook’s response.

What will come next now that Twitter has pushed over one domino? Forty-six percent of respondents think it will encourage other platforms to regulate or verify content “in a good way.” 14 percent thing it’ll happen “in a bad way.” And another 14 percent said it won’t do much to encourage anyone else at all. Probably not until the President of the United States make his big leap to Instagram or Reddit, I suppose.

Here’s the full infographic below from Piplsay.