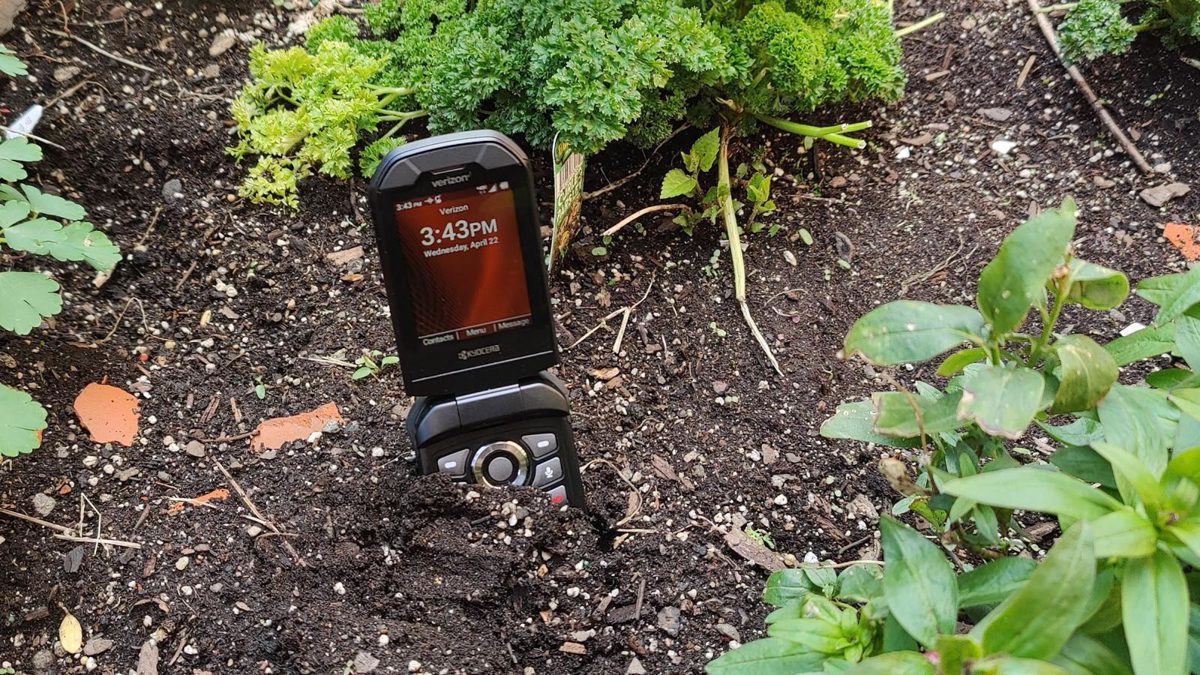 If you have an older voice phone, you’re going to need to replace it soon whether you want to or not. Verizon is turning its old 2G/3G network off at the end of this year, meaning only 4G phones with VoLTE, or voice-over-LTE, will work on its network. VoLTE phones tend to have better voice call quality, but are more expensive and have shorter battery life than older 2G/3G phones. The Kyocera DuraXV Extreme is a solid choice for a new Verizon voice phone—literally. This super-tough, very traditional flip phone offers only the basics, but it does them well. At $240, it’s not cheap, but it will keep you connected for years, and that makes it an Editors’ Choice.

The DuraXV Extreme is a big, chunky phone made of smooth black plastic with rubber bumpers. It doesn’t need a case; it is its case. It measures 4.36 by 2.22 by 1.07 inches (HWD) and weighs a hefty 6.8 ounces. 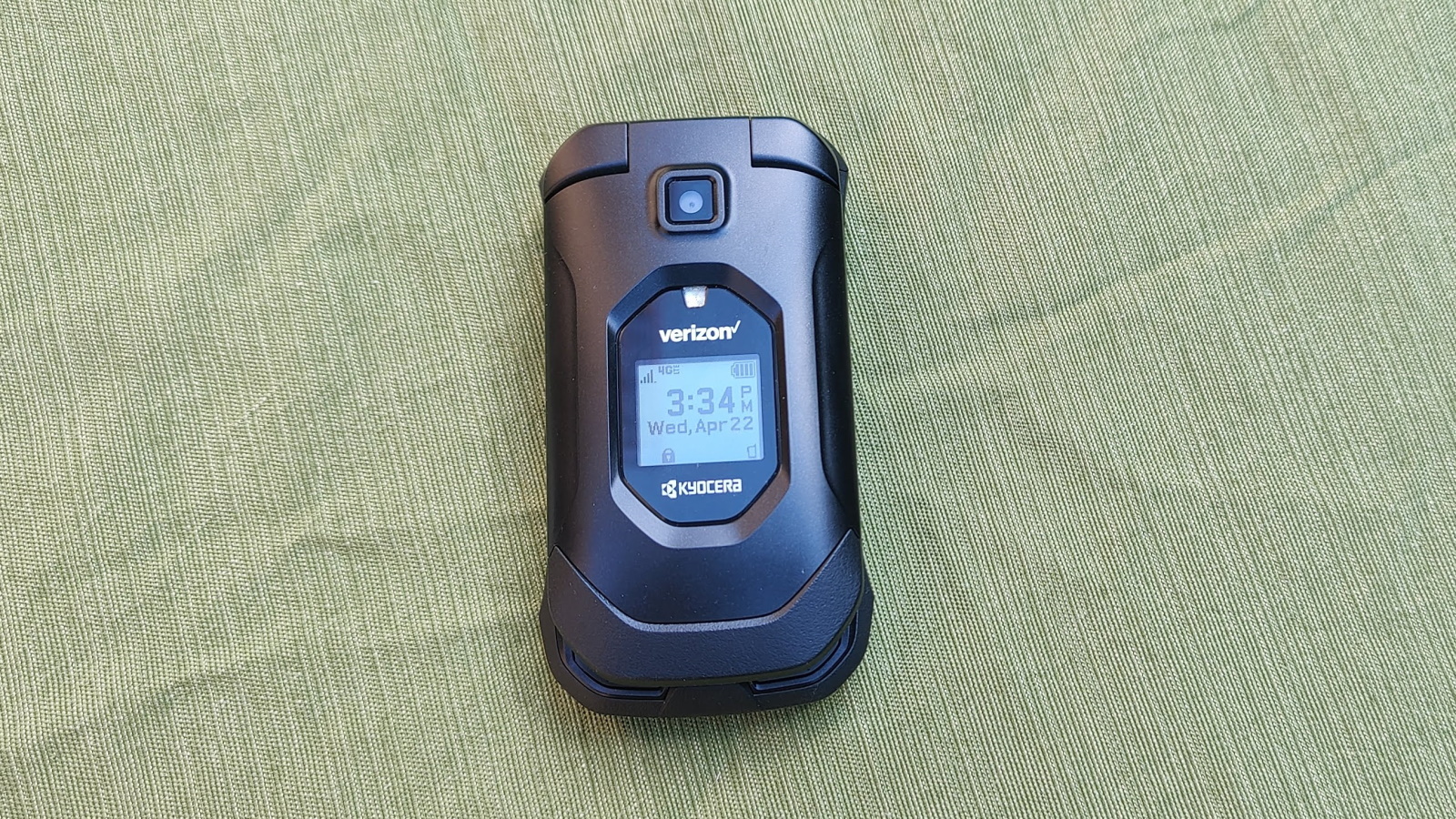 On the outside, there’s a bright, monochrome 1-inch, 102-by-90-pixel screen showing the time, date, battery level, signal strength, and caller ID information. There are four dedicated, programmable hardware buttons distributed around the body; although they’re set by default to control push-to-talk operations and the speakerphone, you can change them to activate any app on the device. The USB-C charge/sync port and 3.5mm headphone jack are both covered with rubber plugs. 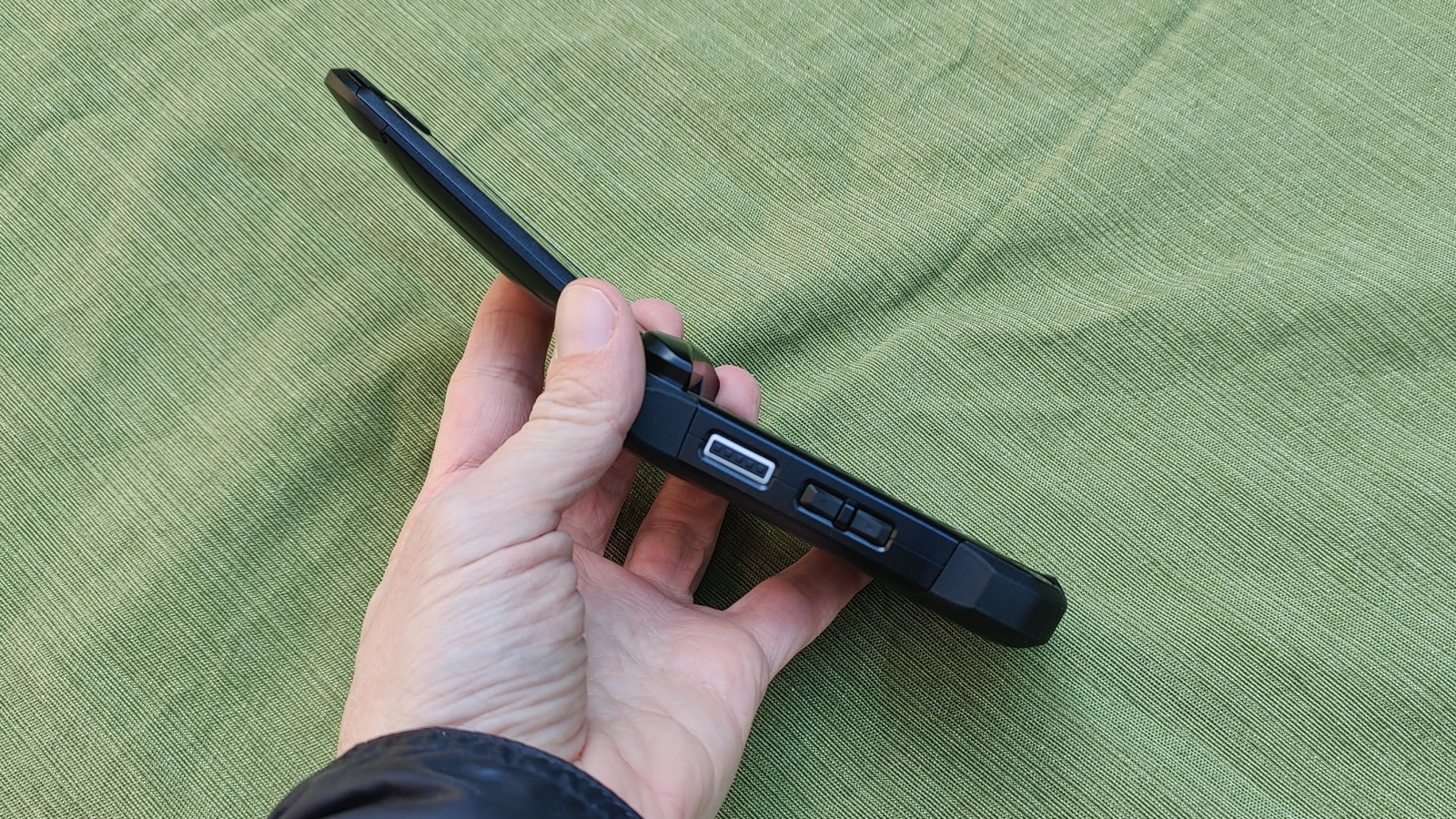 There’s a big, reprogrammable PTT button on the side

It’s easy to flip the phone open and closed with one hand; the hinge has just the right amount of spring to it. Open the phone and you get nicely separated and clicky physical keys, along with a powerful dual-driver speakerphone at the bottom. The 2.6-inch, 320-by-240 screen is just fine. There are dedicated hardware keys for the camera and for the basic voice dialing system.

The DuraXV is rated for military spec 810G. It operates at temperatures from -4 to 104 degrees Fahrenheit. It resists water, dust, heat, and shock, and you can scrub the COVID-19 right off of it. You think I’m joking about that last one? Kyocera suggests you wash your phone with dish soap, which, we know, kills the virus. Kyocera doesn’t suggest using bleach-based cleaners (which can degrade rubber seals) or power-washing the phone, but I did that anyway to make a point, as you can see in the video below.

Tossing the phone onto concrete will only scuff the case. Getting the phone soaking wet reduces the speakerphone volume and quality, at least until the phone dries out. Mine sounded a bit strangled until a few hours later, after which point it sounded fine.

The DuraXV uses a Qualcomm Snapdragon 215 chipset. This is the first low-end Qualcomm chipset to support EVS, or Ultra HD voice, the best voice quality mode available right now. Verizon customers only get HD or Ultra HD voice when calling another phone that supports it on Verizon or AT&T, but it’s worth it when you do; HD Voice calls sound much richer and easier to understand than old 2G or 3G calls. The phone also supports Wi-Fi calling where you don’t have a Verizon signal. 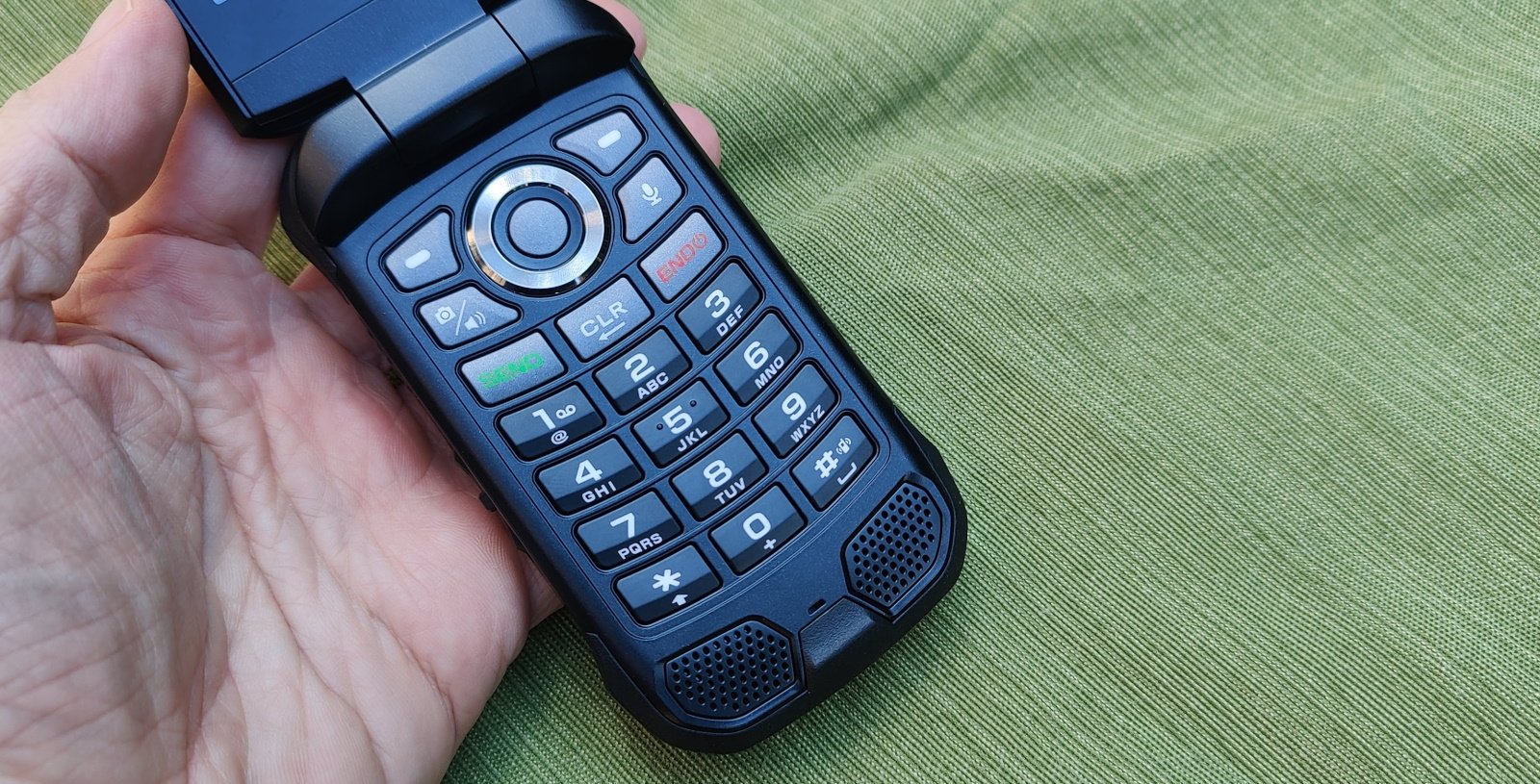 As you’d expect from a phone like this, the speakerphone is super loud. It blasts through outdoor noise, no problem. The earpiece is also loud, and noise cancellation through the microphone is pleasantly aggressive. The phone supports Bluetooth 4.2 and had no problems connecting to my Plantronics Voyager Focus UC headset. Pressing the headset’s action button triggered the phone’s voice dialing system.

Verizon’s push-to-talk is an app-based system designed for fleet communication in enterprise contexts. It gets middling reviews online, mostly because of perceived unreliability in the servers that connect and route calls; I wouldn’t consider it to be a major factor in your purchase, because consumers will likely never use it. Reprogram the button for something else, like the flashlight or the FM radio.

The DuraXV gets decent LTE reception. It’s a category 4 LTE device on bands 2/4/5/12/13, with 3G GSM for international voice roaming. While it works as a Wi-Fi hotspot for up to 10 devices, don’t expect to get great speeds. 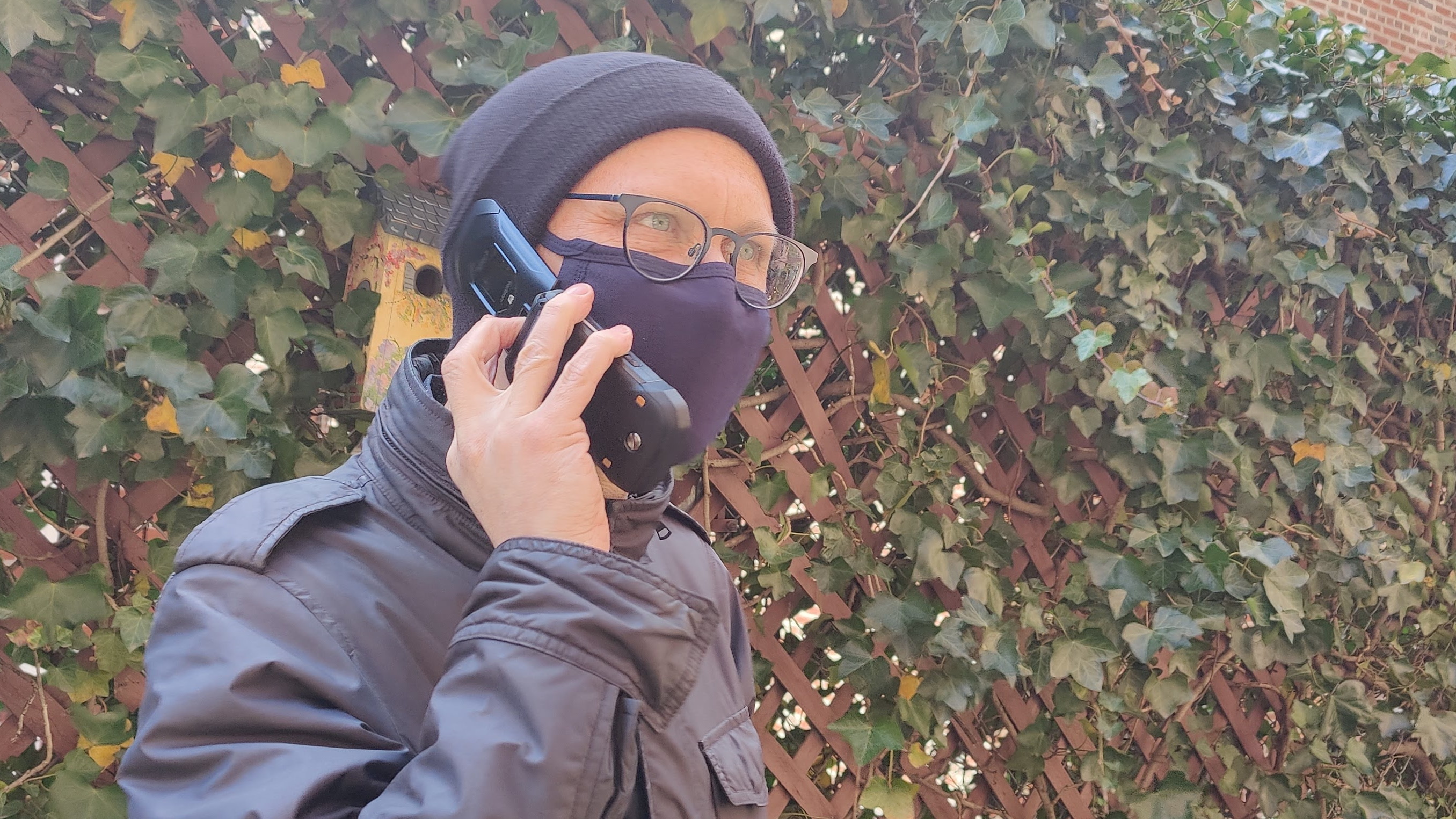 This is a comfortable phone to talk on

I got 7 hours, 3 minutes of talk time on the phone’s 1,770mAh battery. That’s less than the promised 9.5 hours. Kyocera says the phone has up to 18 days of standby time.

Like on a lot of similar phones, the DuraXV’s operating system is Android-based, but designed to work as much like a 2004-era flip phone as possible. There’s a browser, a basic email app, and old-school tools including a calculator, calendar, alarm clock, voice recorder, flashlight, and stopwatch. The phone will play music and video files from its internal memory or a microSD card. 2GB of RAM means the menus and applications zip along, but there are no games and there’s no way to download additional applications. 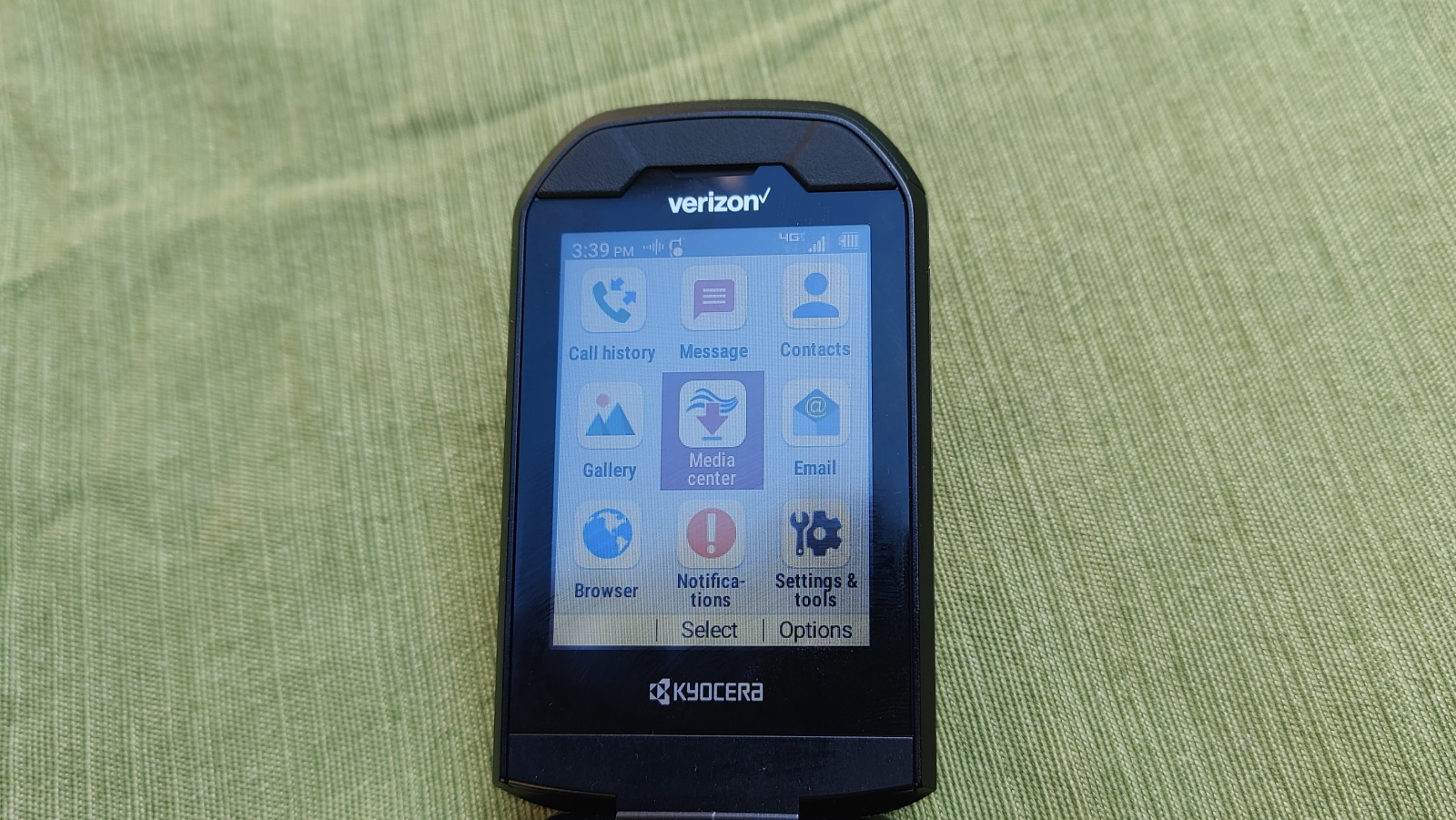 The menu system is extremely basic

The DuraXV has one tremendously helpful 2020-era advance: If you hook up an AOL, Microsoft, or Yahoo! account, it will automatically sync your contacts and calendar events. It’s worth setting up one of these for free, because it lets you get around having to set up and sync contacts by hand. The phone doesn’t work nearly as well with Gmail, which threw a two-factor authentication error every time I tried to set it up.

You’re still stuck in 2004 with things like messaging and navigation. There are no messaging apps other than SMS, and no mapping app. The texting app supports sending and receiving picture and video messages, as well as receiving emoji. You can save pictures and video to the phone. Text entry is via triple-tapping or XT9 predictive text; there is also a limited set of emoji for your use, mostly different smileys.

The phone has 38 loud ringtones and five vibration patterns, which you can assign by contact, but you can’t easily assign the same ringtone to all contacts in a group. You can turn your own MP3s into ringtones by dropping them into the right folder.

There’s 10.3GB of available storage, plus a slot under the battery for a microSD card. The phone has a single, 5MP camera that takes dim photos and jittery 720p videos. Cameras on these flip phones are never very good. This one follows suit, with dark, smeary, and soft images, with serious focus problems. 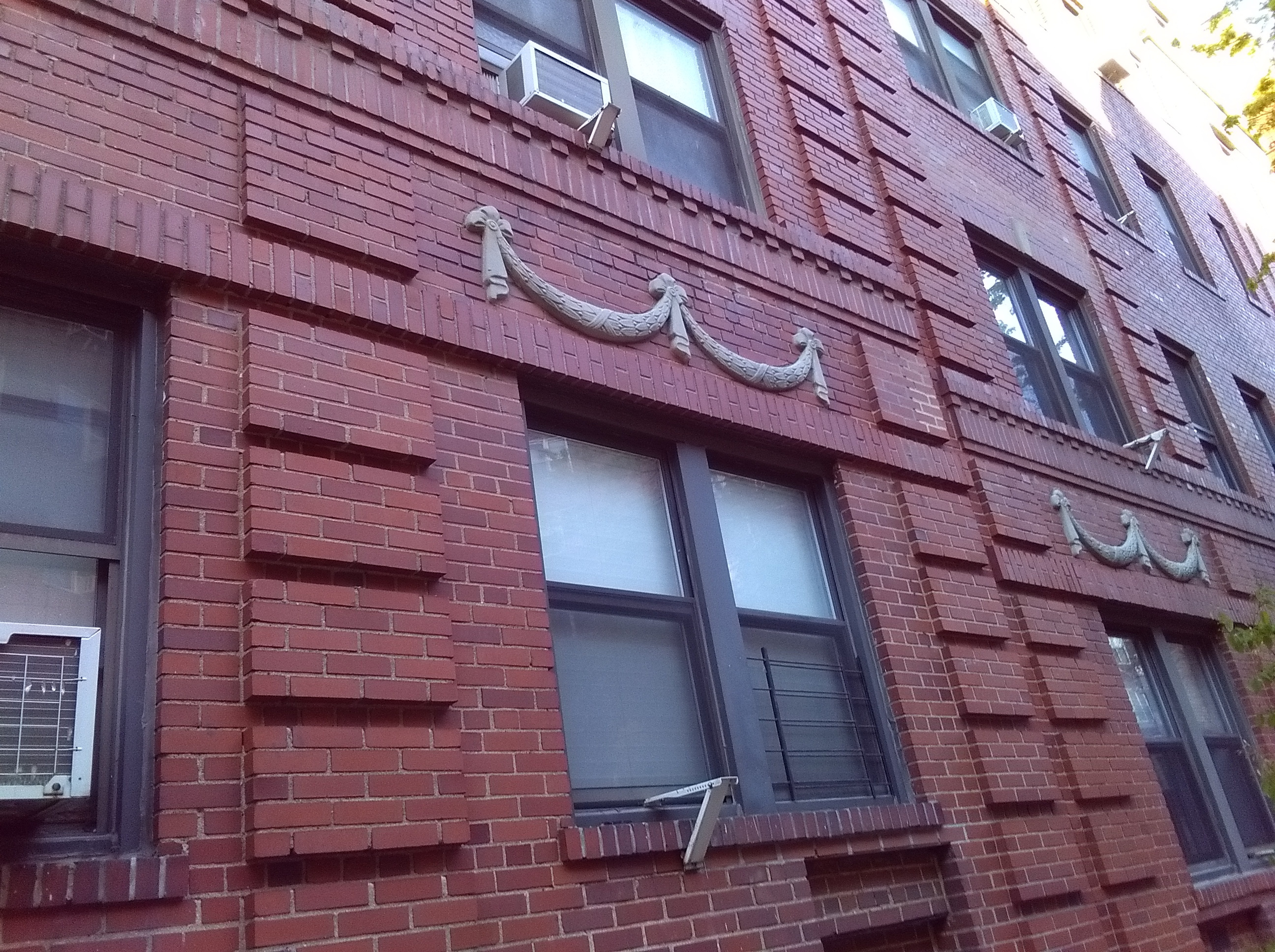 I was disturbed enough by the focus issues here to try to dig into them, but I didn’t get far. I had inconsistent results both with close-up and distance shots, with the autofocus frequently misjudging where it should lock. At night, you pretty much always have to use the flash. 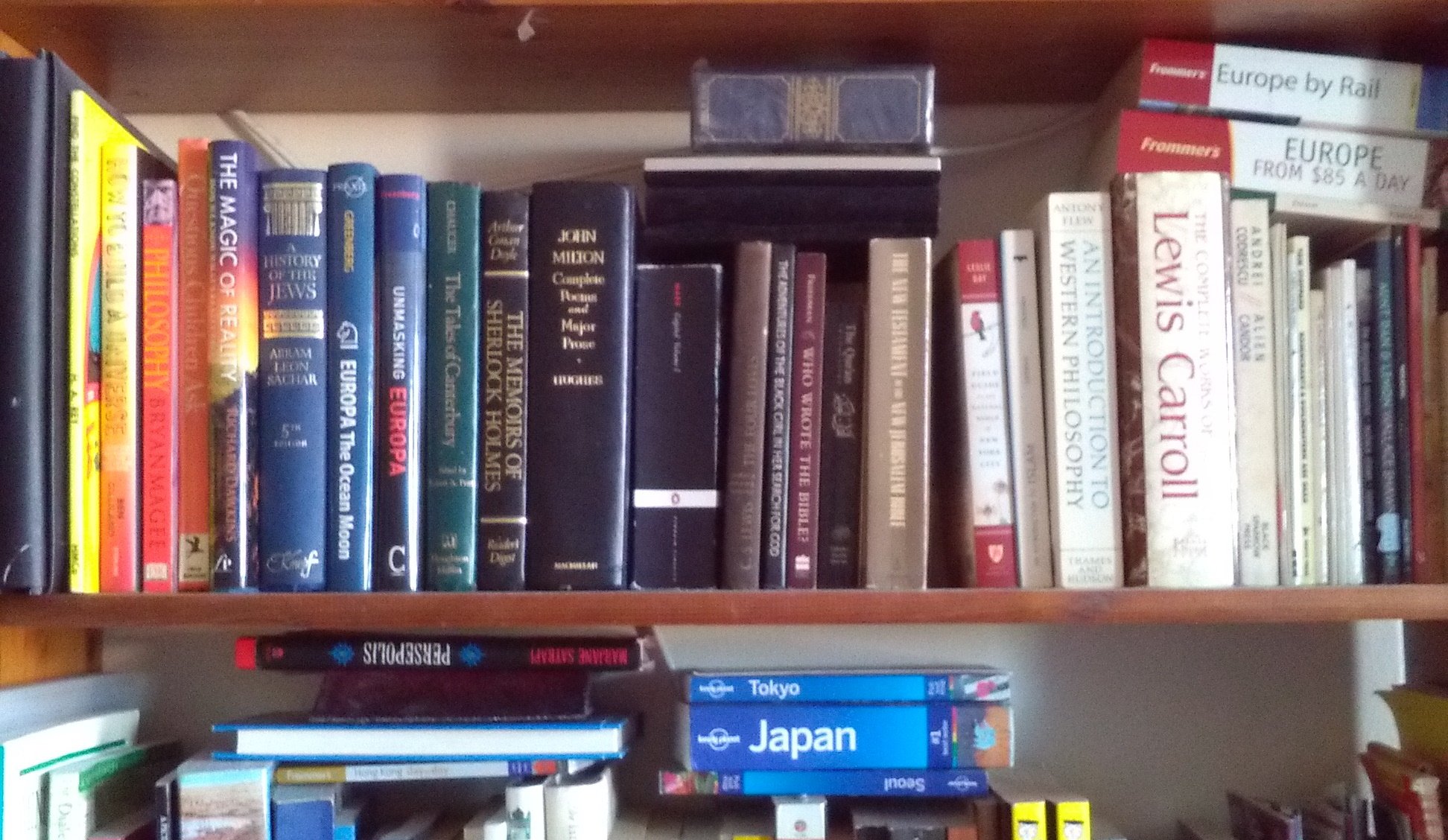 Notice how fuzzy this shot is

There’s also a version of the phone with no camera; it costs the same, but some people want a phone without a camera.

Media playback is less disappointing. You can load AAC, MP3, and M4A music files into the built-in memory or a microSD card, and if they’re appropriately tagged, you’ll get them sorted by album, artist, and song with album art intact. While the media player technically supports M3U playlists, I couldn’t get transferred playlists to show their lists of songs correctly. The only streaming service the phone supports is truly old-school: FM radio, when there are headphones plugged into the 3.5mm jack.

Verizon has more 4G basic phones than the other carriers, but in general, they aren’t very good. For instance, Verizon’s Alcatel Go Flip V isn’t based on the Go Flip 3, which we like—it’s based on an earlier Go Flip, which was sluggish and unreliable. The Kazuna eTalk and Orbic Journey V are no-name phones with no reputation for quality. The Sonim XP5s is a brick with small buttons.

That leaves the DuraXV Extreme, which thankfully is a fine and reliable choice for the next several years. While I’d like it to live a little more in the present in terms of messaging, I’m happy to see its cloud-contact-syncing function, and its voice performance is reliable enough to make it an Editor’s Choice.

If you don’t use Verizon, take a look at the Sonim XP3 for AT&T and Sprint. It’s very similar in terms of durability and clear calling, although it lacks EVS and the cloud-contact-syncing function here.