Kintsugi: The Art of Fixing Broken Pottery With Gold 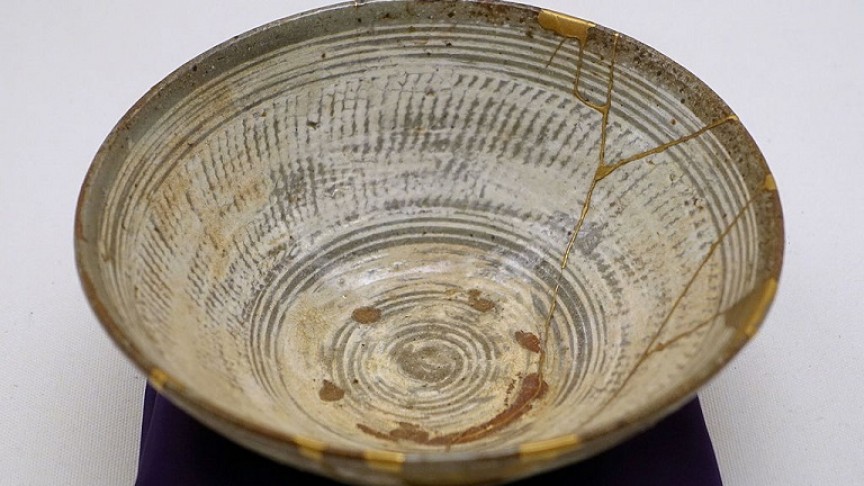 Kintsugi, otherwise know as Kintsukuroi, is an interesting method of repairing broken Japanese pottery with gold. You read that right, actual gold.

The philosophy of Kintsugi is to preserve the history of the object and accept and celebrate the repair instead of disguising it. As you will soon see, the final product might arguably be considered more beautiful than the original piece of pottery.

The final products are so stunning to look at that you might be tempted to start breaking pottery on purpose to make more examples. Unless it is a priceless Ming vase, of course.

Kintsugi can be loosely translated as “golden joinery”. A very fitting term, as you are about to find out.

The technique, effectively, gives life to piles of worthless pieces of broken pottery. But it is much more than that.

Kintsugi’s philosophy can be described as: “the practice is known, gives new life, healing or rebirth to damaged or aging ceramic objects by celebrating their flaws and history. One can consider how we might live a kintsugi life, finding value in the, missing pieces, cracks, and chips, bringing to light the scars that have come from life experiences, finding new purpose through aging and loss, seeing the love and the beauty of ‘imperfection’ and loving ourselves, family and friends even with flaws.” Nicely put.

The history of Kintsugi

Kintsugi is a form of lacquerware which has a very long history in Japan. It is also very similar to another technique called maki-e.

Maki-e is a lacquer technique that, like Kintsugi, uses metallic powder (like gold or silver) sprinkled or sprayed on wet lacquer to decorate screens, albums, letterboxes, ink-slab cases, and many other objects. It is believed this technique was originally developed during the Heian Period of Japan, between the late-8th and late 12th century.

From what is historically known about the technique, Japanese artists were able to create their own spin on the style sometime in the late 15th century, and by the 17th century, it was in common use in Japan.

Lacquerware, in general, it is believed to have been first developed in China more than 3,000 years ago. It later spread throughout the East and Southeast Asia, including Japan. With the spread of Buddhism in the 9th century, large numbers of lacquered objects began to be created and displayed in temples and the households of the privileged classes.

Another source explains: “Japanese lacquer skills reached its peak as early as the twelfth century, at the end of the Heian period (794-1185). This skill was passed on from father to son and from master to apprentice.”

Some provinces of Japan became highly skilled at this technique; notably the province of Edo (present-day Tokyo). Some of the best examples date to around the 17th to the 18th centuries.

Many Japanese lords and shoguns even privately employed lacquerers to produce ceremonial and decorative objects for their homes and palaces. With regards to Kintsugi, according to Japanese legend, it originated in the 15th century, when a Japanese Shogun, Ashikaga Yoshimasa, broke his favorite tea bowl. He sent it back to China for repair.

When the bowl returned, it had been repaired with unsightly metal staples, the standard repair technique of the time. Yoshimasa was displeased with the bowl’s repair and this motivated Japanese craftworkers to find an alternative, aesthetically pleasing method of repair. And thus, so the story goes, Kintsugi was born.

By the 17th century, Kintsugi was a common practice in Japan. It is said that collectors became enamored with the look of the technique that they would often break pieces on purpose so they could be repaired in a similar fashion, and claim a higher price.

Whether this is true or not, the technique is still very popular today.

Is gold actually used to fuse the pieces?

Yes and no. The broken pieces are recombined using a special kind of glue called UrushiLacquer. The lacquer is made from the sap of the lacquer tree, or Japanese varnish tree (Rhus vernacifera), which is native to China and Japan and much of Southeast Asia.

This lacquer is highly prized and has in regular use for thousands of years. In order to extract it, the tree must be tapped very carefully as the sap is very poisonous to the touch. Even inhaling the fumes from it can be dangerous. For this reason, Japanese sap tappers have refined the technique over millennia.

Small incisions are made into the tree’s bark to extract the greyish-white viscous sap. Extraction tends to be made in very small quantities at a time. The sap is left to rest for several years and is treated to make an extremely resistant, honey-textured lacquer. The lacquer is then filtered, homogenized, and dehydrated.

This leaves a transparent resin that can be tinted in black, red, yellow, green, or brown. Once the lacquer is applied to an object, it is dried under very controlled temperatures and humidity. Pure urushi dries into a transparent film, while the more familiar black and red colors are created by adding minerals to the material. Each layer is left to dry and polished before the next layer is added.

As the sap is pretty toxic, you probably won’t be surprised to hear that safer modern alternatives have been produced. Polymer technology is employed today to produce a Kintsugi-style material that provides a longer-lasting repair that is also considerably stronger than the traditional method.

But, what about gold?

Once the reassembly and repairs are complete, the gold or silver (or sometimes platinum) decoration is made. So carefully done is this stage, that the final look appears as though the piece has actually been repaired using pure gold.

The effect was originally accomplished by applying a final layer of lacquer impregnated with gold, silver, or platinum powder. For true Kintsugi, the real precious metal powder should be used, but it can be simulated if the customer’s budget prohibits its use. Today, simpler Kintsugi is crafted from artificial resins and gold pigment powders.

Imitation is the sincerest form of flattery, but not always

Like many things in life, there are various examples of replica Kinstugi techniques. However, they are far from as impressive as the real thing. Many professional Kintsugi restorers do warn about the use of non-gold lacquers in most of the alternative techniques. For example, some cheaper alternatives will involve the use of gold paint brushed over the repair seam. As you can see in the image below, this method doesn’t really do the art form justice.

On some occasions, gold color, rather than actual powder, can be mixed with the bonding glue. These are the usual options provided by “off the shelf” Kintsugi repair kits. Another method to achieve the gold effect involves painting the piece without it actually being broken in the first place.  Examples of this include Bernardaud, Sarkis Coupe plate sets. These use gold color or glaze silk screened onto the surface of the pottery. Obviously, this is a complete “fake” alternative and it looks a little odd. But we’ll let you be the final judge.

A company called Humade offers DIY kits with gold and silver lacquer to attempt the Kintsugi-like technique for yourself. Be warned, however, that these kits rarely include authentic materials or precious metal powders. So, make sure you only use less valuable pottery pieces with these kits.