John Wiley & Sons: About To Surpass $2 Billion In Revenue 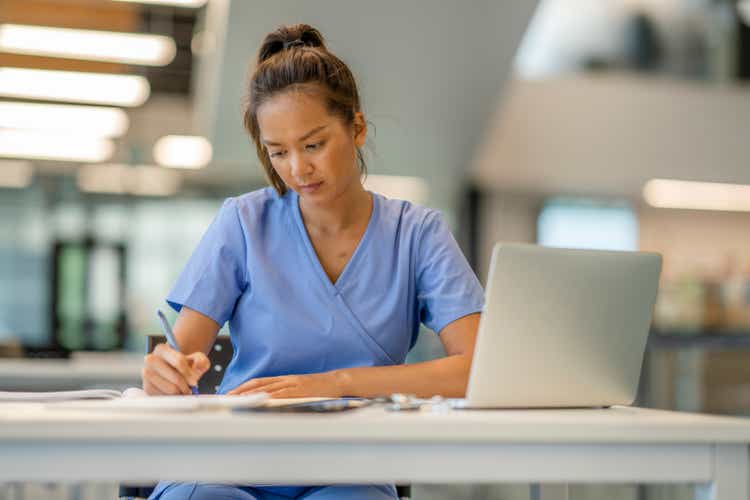 John Wiley & Sons, Inc. (NYSE:WLY) (NYSE:WLYB) ends its Fiscal Year 2022 with its earnings call on June 15th, expecting to surpass $2 billion in revenue and in a strong cash position to pay a 2.8% dividend and repurchase $200 million worth of company shares. In the midst of a supply-chain disruption and the Russia-Ukraine war, the company anticipates being unscathed because 82% of its revenues have been transitioned to tech-enabled services and its core business is not sensitive to geopolitical tensions. It has an upside of between 57.4% and 68.6% and investors looking to buy a company with 215 years of operating history and 28 consecutive years of dividend increases should consider buying WLY or WLYB.

John Wiley & Sons, Inc. formerly traded under ticker symbols (JW.A) and (JW.B), plans to unlock accessible open research for more people. It plans to surpass $2 billion in revenue for the first time in its 215 years of operating history. With a strong network of universities and corporate partners and 82% of revenue being tech-enabled, John Wiley & Sons, Inc. has transitioned its business model to be responsive to market conditions. The recent acquisition of XYZ Media has allowed over 140,000 qualified student leads and a considerable increase in both Revenue and EBITDA margin.

In March 2022, the company announced that it was able to achieve a 7% revenue growth (4% organic growth). Additionally, John Wiley & Sons, Inc. will not be impacted by the Russia-Ukraine conflict in terms of its 2022 financial performance. With physical products only being 18% percent of the business, the company is also not affected significantly by the supply-chain bottlenecks. The management did mention ongoing concerns regarding personnel turnover but also relayed confidence in terms of hiring new talent. Lastly, they reported increases in revenues for research and corporate solutions. They reported a decline in education publishing revenue in line with management expectations and have been able to increase overall margins by optimizing costs because of the predictability.

For the upcoming earnings on June 15, 2022, we can anticipate John Wiley & Sons, Inc. to meet the end of fiscal year revenue growth target of around 8% or $2.07 billion and $2.1 billion in actual revenue. They anticipate adjusted EBITDA in the range of $415 million to $435 million, and free cash flow in the range of $200 million and $220 million. Additionally, the company anticipates paying a dividend at a yield of 2.8% and repurchasing 448,000 shares at an average price of $55.48 per share, which is higher than the current share price.

With cash flow fluctuating considerably between $59 million in April 2017 to $170 million in 2018, ending back down to $94 million in April 2021, we see John Wiley & Sons, Inc. has historically been unable to maintain steady cash flow. This is attributable to its recent acquisitions and tech-enabled business transition. However, management expects the cash flow to improve to $200 to $220 million for 2022.

Per management guidance, with an 8% growth rate and 20% EBITDA margin, using the DCF analysis shown below, the fair value of the company share price is $80.01, which represents more than 57.4% increase above the current price.

Looking at comparison with industry peers, we see that John Wiley & Sons, Inc. is fairly priced with a fair value price between $50.75 per share and $80.90 per share, as shown below. The company currently trades at 19.3 times trailing PE and 17.6 times forward PE, which is in line with the industry median of 19.3 times trailing PE and 19.5 times forward PE. If the management delivers on its operating plan, based on the analysis below, John Wiley & Sons, Inc.’s upside is well within the bounds of its industry peers.

Based on the value of dividends paid by John Wiley & Sons, Inc., using the dividend discount model, the stock has an upside of 68.6%.

As bulls and bears fight to determine the fair valuation of large tech companies during the recent economic downturn, John Wiley & Sons, Inc.’s core business remains unscathed. The overall number of degree-seeking students has declined 6% because of the availability of jobs and countercyclical nature of the research and education industry, which the company has already accounted for in its guidance and projections. Additionally, this factor is being counteracted by the increase in corporate sales and career-focused student sales.

John Wiley & Sons, Inc.’s core business remains strong and predictably unaffected by larger macroeconomic events. Its transition to a tech-enabled business model has allowed it to sidestep the supply chain bottlenecks. Additionally, with operational insights from 215 years and strong fundamentals, the company is well-positioned to appreciate its share price by over 50%.