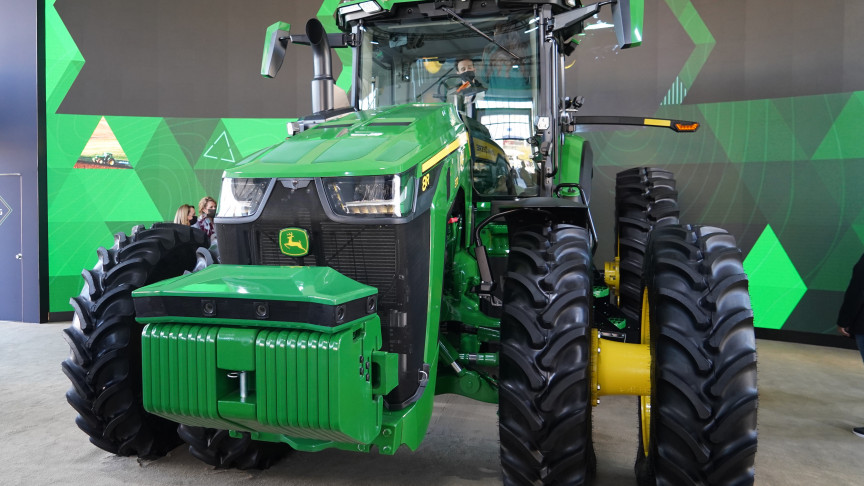 John Deere has come a long way in its 185 years.

Nearly two centuries after it started building steel plows, the well-known farm equipment manufacturer announced at CES 2022 that it has developed technology that fully automates some tractor functions. The company didn’t unveil a fully automated tractor. Instead, it intends to produce kits that can be added to its 8R 410 tractors, enabling machines farmers already own to operate without direct human supervision. The company said it would sell no more than 20 units this year. It plans to ramp up production in 2023.

The system uses 12 cameras, GPS, and a neural network

The new system consists of two boxes, one mounted to the front of the tractor and the other mounted at the rear. The boxes will use 12 stereo cameras and a GPS unit to collect the data necessary for the system to understand its environment and avoid hitting obstructions. That information will be fed through a neural network that quickly classifies each pixel to determine if the machine should proceed along its predicted path, the company said. The farmer will control and monitor the machine using — what else but — a smartphone app. The company didn’t provide details on how much the system would cost or how it would be sold, but a report in CNET suggests it could cost as much as $50,000. That’s about 10% of the total cost of an 8R 410 outfitted with a plow.

The new system does not offer a full-service automated solution for farmers. For the foreseeable future, the system will only be able to till fields. That is, turn over the soil between the harvesting of one crop and the planting of the next. That means the system introduced by the company won’t have to manage the complexity — and, for farmers, extremely high stakes — that come with handling delicate seeds, plants, or produce. That doesn’t necessarily mean the system won’t be worth the learning curve and expense for many farmers, though. With a labor shortage making agricultural workers hard to come by for many farmers, any bit helps.