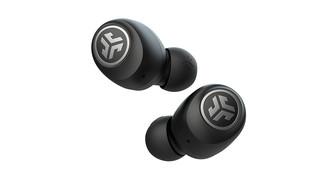 It’s hard to make earphones that deliver quality audio for under, say, $40. Under $30, you start to expect less. Less than $30 with no cable? Expectations are not high. With the new JLab Go Air, a $29.99 pair of true wireless earbuds, there are problematic on-ear controls, a useless app, and some seriously sculpted, bass-heavy audio. But if you need a cheap pair of exercise-friendly, wire-free earphones, you simply won’t find a better deal.

The black Go Air earpieces have the JLab logo on the outside, and as far as exercise-focused models go, they feel rather small. That’s impressive, because the fit is actually quite secure—typically, we see larger earpieces with fins and hooks, but these are small and fin-free. Internally, 8mm neodymium dynamic drivers deliver a frequency range of 20Hz-20kHz. The earphones are compatible with Bluetooth 5.0 and support AAC/SBC Bluetooth codecs.

The outer panels of the earpieces have touch-sensitive controls, with the left ear handling volume down (single tap), track backward (press and hold for a second), and power (hold for three seconds). The right ear raises volume (single tap), controls playback (double tap), skips forward a track (press and hold for a second), handles call management, and can also be used to power down. Both ears cycle through the three EQ modes with a triple tap. Those modes are JLab Signature, Balanced, and Bass Boost. There is no neutral or off mode.

The sensitivity of the buttons is problematic—it often took multiple taps in testing to get the controls to register touch, and that means for commands that require multiple taps, as several of them do, you stand a good chance of misfiring. This makes for some of the more frustrating on-ear controls we’ve tested.

The charging case is one of the more peculiar designs we’ve seen in the true wireless realm. There’s a hardwired USB cable with almost zero extension to it, which can make charging annoying. And there is no cover—the earpieces are exposed when docked. 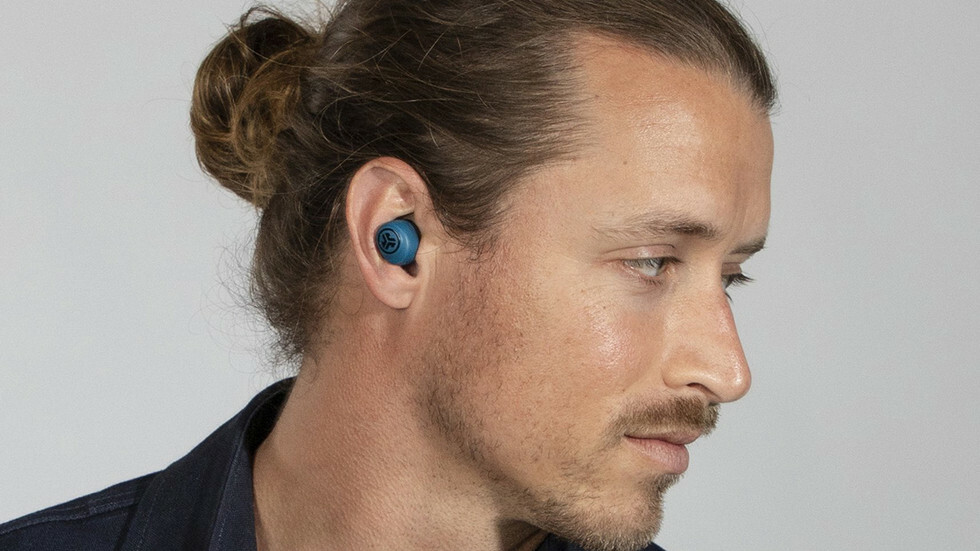 At this price, any level of water resistance can be considered a plus, but the Go Air ‘s IP44 rating is merely decent—it can only stand minor splashes and some exposure to dust/dirt particles. This rating isn’t high enough to withstand water pressure from a faucet or dunking underwater, but should withstand a sweaty workout and a damp washcloth without issue.

The JLab Audio app and Burn-in Tool is, perhaps, the least useful app we’ve encountered for true wireless in-ears. It’s clunky, and exists more as a marketing tool for JLab than as anything useful. Your earphones probably also don’t need “burn in,” but at least using the tool can’t hurt. Mostly, the app is there to allow you to connect to the JLab store and spend some more money. Ultimately, there’s really no compelling reason to download this app, and you can absolutely skip it and avoid the sales pitch.

JLab estimates battery life to be 5 hours, with the case capable of carrying 15 additional hours. Your result will vary, however, with your volume levels.

We listened to music in all three EQ modes, but our test results described below are in Balanced mode, as it supposedly has no enhancements—JLab Signature mode has boosted bass and “amplified vocals,” and Bass Boost mode pushes the bass even further.

On tracks with intense sub-bass content, like The Knife’s “Silent Shout,” the earphones deliver a powerful low-frequency presence that avoids distorting at top, unwise listening levels and maintains a powerful thump at more modest volumes. In Bass Boost mode, this track sounds ridiculously unbalanced—the lows overwhelm any sense of clarity.

Bill Callahan’s “Drover,” a track with far less deep bass in the mix, gives us a better sense of the Go Air’s general sound signature. The drums here sound full and robust in Balanced mode, and thunderous in the other two modes. Callahan’s vocals are delivered with solid low-mid richness and a decent level of treble edge. The acoustic strums and higher-register percussive hits have a bright presence to them—this is a balanced sound signature, but it is scooped, with a focus on lows and highs, less so on mids.

On Jay-Z and Kanye West’s “No Church in the Wild,” the kick drum loop receives enough high-mid presence for its attack to retain its punchiness, while the sub-bass synth hits that punctuate the beat are delivered with serious depth. In Bass Boost and Signature modes, these synth hits and the drum loop are simply coated in added bass depth—those who enjoy extra oomph for their workouts might appreciate it, but anyone seeking a sense of accurate audio will want to stick with Balanced mode. That said, even Balanced mode can sound weirdly scooped and pinched—the vocals here are never overly sibilant, but the whole track sounds quite sculpted.

Orchestral tracks, like the opening scene from John Adams’ The Gospel According to the Other Mary, have a crisp, bright presence that accentuates the higher-register brass, strings, and vocal parts while receiving some extra bass anchoring. It’s not a terribly accurate sound, but it doesn’t sound as wildly sculpted in Balanced mode as it could. The other two modes serve to essentially remove the mids from the equation, and are not sensible for orchestral recordings.

The mic offers average intelligibility. Using the Voice Memos app on an iPhone 8, we could understand every word we recorded, and the mic signal was strong. However, there was also some obvious Bluetooth distortion fuzzing up the recording, so there’s a trade-off between signal level and overall clarity. As far as true wireless in-ear mics go, however, we’ve heard worse on far more expensive models.

If you need a cheap pair of true wireless earbuds for exercise, that’s the obvious appeal here. The touch controls are unreliable, the sweat-resistance is modest, and the audio is geared to those seeking serious bass boosting, not accuracy. If you can live with all of those qualities, then the JLab Go Air earphones represent a solid value—how could they not at $30? In the sub-$100 true wireless realm, we’ve tested a few other pairs worth mentioning, including the $45 EarFun Free, as well as the more expensive, far superior $80 Anker Soundcore Liberty Air and $99 Cambridge Audio Melomania 1.