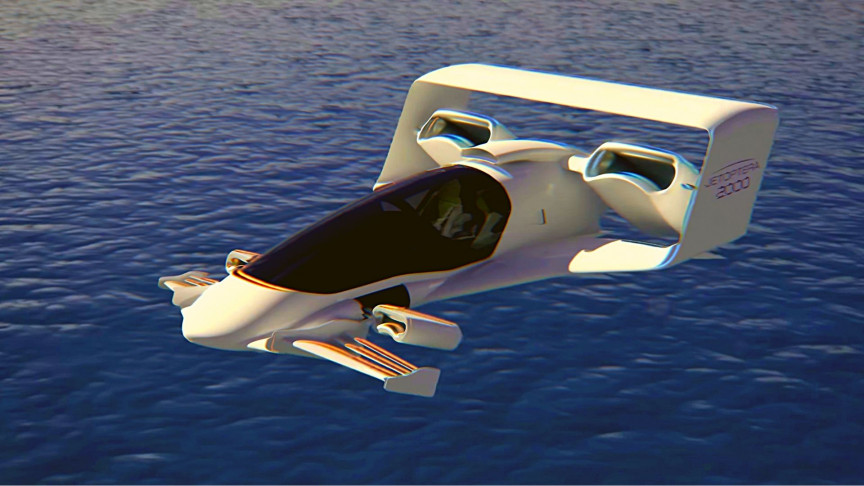 Nearly every air taxi concept involves rapidly spinning propellers or ducted fans placed in strategic positions outside of the main fuselage of the aircraft — moving air fast enough to achieve thrust in the direction of propulsion.

However, a new air taxi concept from a company in Seattle breaks from the norm — reinventing flight with bladeless fans at incredible power levels, according to Jetoptera’s official website.

However, much like Dyson, this VTOL aircraft’s FPS does have spinning blades in its system. Both devices use fluid dynamics to take in a comparatively small flow of compressed air, which is then used to suck in a much larger flow of ambient air at ludicrous speeds. Sir James Dyson himself explained how it works — employing a small, quiet impeller to amass pressure around an aerodynamically shaped loop, which eventually exists at incredible speeds through a little slit curved around the ring of the FPS.

The fast-moving air is directed backward over the air taxi’s wing-shaped surface around the ring, where it creates negative pressure — what aircraft use to lift up into the sky. But for the J-2000, this lift-capable differential pressure is canceled from equal negative pressure zones surrounding the ring — creating a net low-pressure vortex in the center of the ring, which then pulls ambient air through at a very high velocity.

The aircraft also uses a process called fluid entrainment — vortices coalescing where cylindrical bodies of accelerated air leave the ring, interacting with stationary ambient air surrounding it. Crucially, J-2000’s concept designs can suck up 15 times the volume of air pulled through the ring by the compressor.

Jetopra imagines battery technology will have to reach energy density levels of roughly 1,500 Wh/kg — keep in mind today’s batteries are only 260 Wh/kg — before it can install an electric compressor for the desired effect in the J-2000. Until then, the company is using gas generators — specifically, a 75-kW turboshaft system that takes its cue from the Acutronic SP75 — during large-scale tests of its propulsion system.

This system has several benefits, according to Jetopra. The J-2000 “improves propulsive efficiency by more than 10 percent while lowering fuel consumption by more than 50% compared to small turbojets,” read a page from the company’s official website. “The propulsion system saves approximately 30% in weight compared to turbofans or turboprops and significantly reduces complexity.”

The novel aircraft is also lightweight, and tilts back and forth with ease — which means VTOL lift and hover maneuvers and cruise flight are definitely not ruled out. Critically, and parting ways with other aircraft’s method of propulsion — the craft doesn’t need a round, aerodynamic shape. Several shapes are sufficient for flight, but the most notable ones extend flat shapes that follow the layout of an aircraft’s wing. Moving air to greater velocities along the full wing’s width can curry extra lift, while also minimizing how much space on a vertipad is needed — compared to typical lift/cruise eVTOLs, or conventional helicopters.

There’s much to admire in this new design concept, and Jetopra’s J-2000 is just getting started. A recent noise test with a U.S. DoD-funded research collaboration saw the aircraft’s FPS register 15 dBA lower than a conventional propeller with an internal combustion engine at the same level of total thrust. Compared to other initiatives, like Volocopter’s eVTOL air taxi — which aims to activate air taxi routes in Paris and Singapore ‘within two years’ — Jetopra could find itself closer to the lead when it comes to the technological edge for the next generation of inter-city flight.