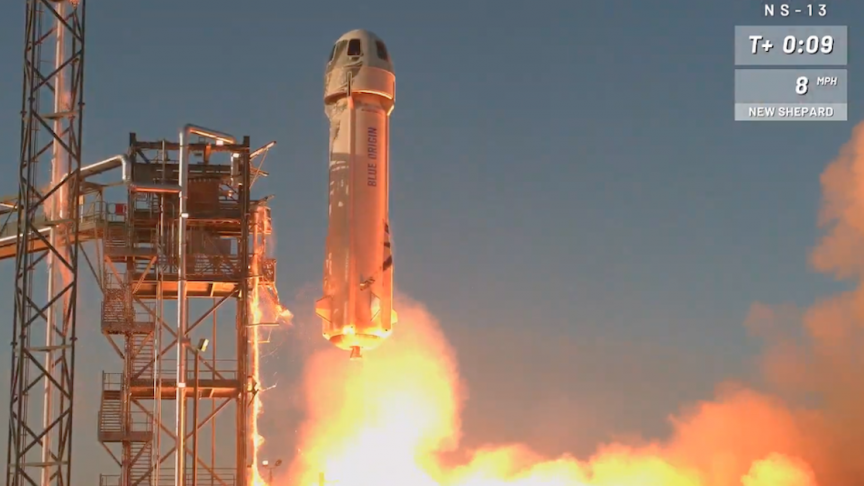 The star of the mission’s 12 commercial payloads was undoubtedly the “Deorbit, Descent, and Landing Sensor Demonstration,” in partnership with NASA, a sensor test for future lunar landings.

The launch was a personal milestone for Blue Origin, as well as a new overall spaceflight record. The NS-13 mission was the seventh consecutive flight to space and back for the same rocket — as a point of comparison, SpaceX’s record for Falcon 9 reuses stands at six.

Booster touchdown! This is the 7th consecutive successful flight to space and back for this fully reusable rocket, and a beautiful demonstration of Moon landing tech w/@NASA. #NewShepard

As Blue Origin explained in a press release preceding the launch, “New Shepard will fly 12 commercial payloads to space and back on this mission,” including the “Deorbit, Descent, and Landing Sensor Demonstration,” to prepare for NASA’s Artemis program, which aims to put astronauts back on the Moon by 2024.

Blue Origin explained that its Moon landing sensor tests “will verify how these technologies (sensors, computers, and algorithms) work together to determine a spacecraft’s location and speed as it approaches the Moon, enabling a vehicle to land autonomously on the lunar surface within 100 meters of a designated point.”

The company says this technology will enable exploration of difficult terrain, via incredibly precise landing accuracy, on future missions to the Moon and Mars.

Also included in the payloads are an experiment to test the ability of plants to grow and survive in microgravity, as well as a test of a new method for attaching small probes to asteroids.

Watch the full live webcast, as it happened, in the video below.